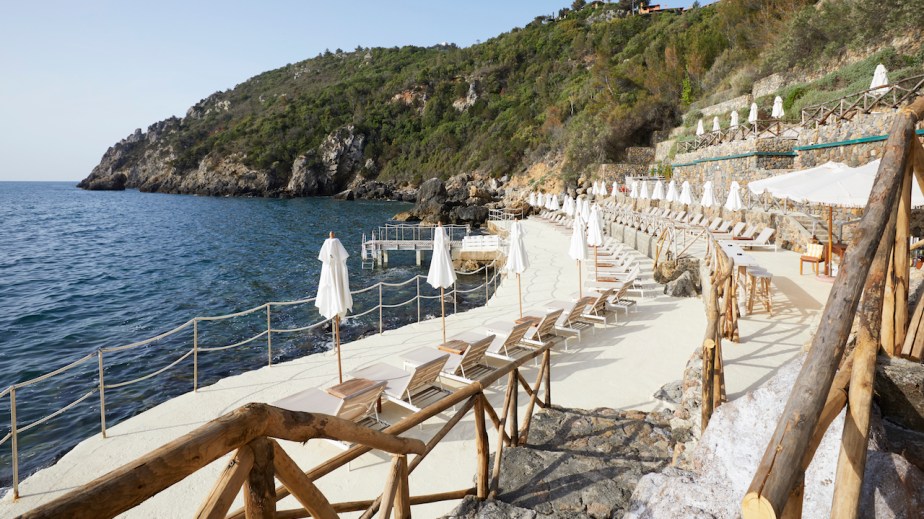 MatchesFashion is taking its 5 Carlos Place concept store on tour.

On May 15, the luxury online retailer will launch a partnership with Italy’s Pellicano Hotel Group involving a product curation by the Group’s CEO and a 1930s yacht-based pop-up that will travel the Italian Riviera. Over the course of eight days, the store will make stops at three Pellicano hotels, including Hotel Il Pellicano in Tuscany and Mezzatorre in Ischia.

Jess Christie, MatchesFashion’s chief brand officer, said doing a pop-up was motivated by the popularity of the company’s experiential 5 Carlos Place store, opened on London’s Bond Street in September. (In its first three weeks, the #5CarlosPlace hashtag reached 45 million people worldwide, according to the brand.) The store’s 20 events per month, including book signings and fireside chats, are live-streamed on Facebook and MatchesFashion.com, and its product curation is featured on the site. MatchesFashion wanted to further scale the 5 Carlos Place concept and reach more customers IRL.

“Travel is such a key part of our customers’ lifestyle and something they respond to so well,” she said of the yacht concept. “It felt like the perfect next step.”

The link to Pellicano Hotel Group was Marie-Louise Scio, its CEO and creative director. Christie said MatchesFashion reached out to work with Scio, who is a MatchesFashion customer, because she embodies the spirit of the company’s customer base overall: She runs her family’s business, has a family of her own and travels, “all with a huge amount of style.” While not an influencer in the usual sense — she has 19,000 followers on Instagram — she is inspiring, said Christie. (Birkenstock also recently tapped her for a sandal collaboration.)

Scion said she saw the partnership as a fit for the Il Pellicano, specifically, because of its growing reputation as a fashion insider’s destination. “Fashion has always been part of the hotel’s DNA,” said Scion. “Plus many designers have come to the hotel, and we even have a little shop, so there’s definitely a connection [to fashion].” Christie said Joseph Atuzarra is among Il Pellicano’s fans.

As part of the partnership, Scio curated a selection of MatchesFashion’s vacation wear, with a focus on Italian designers, which will be featured in both 5 Carlos Place and the traveling pop-up. Scio recruited friend and stylist Robert Rabensteiner to select the men’s fashions.

5 Carlos Place will be remodeled in the style of the Il Pellicano, with the cafe’s menu updated to mirror that of the hotel. Italian-themed programming, including dinners, discussions and demonstrations, will also play out in both the store and the yacht. Together, the events and their online coverage are meant to read like an Italian travel guide and will highlight the country’s best places to eat, stay and spend time.

MatchesFashion will be promoting the pop-up through emails and social posts targeting local shoppers and frequent travelers. The brand expects those featured in the talks and the livestreams of the events themselves will also boost awareness. That proved the case with its first 5 Carlos Place pop-up held during Frieze in Los Angeles in February. For its part, the Hotel Group will be inviting the hotels’ guests and its local clients who frequent its restaurants and spas.

The goal for the pop-up, according to Christie, is to create memorable experiences for visitors and to position MatchesFashion and 5 Carlos Place as go-to sources for discovery opportunities. (MatchesFashion’s annual revenue for the year ending January 31, 2018 was $394 million, up 44 percent year-over-year. It has yet to share its 2018 numbers.)

Traveling pop-ups and those that are pegged to hotels have been catching on. As luxury brands look to reach younger shoppers and retain shoppers’ interest, more are investing in temporary stores. Early this month, timed with the pair’s skin-care collaboration, Estée Lauder launched a pop-up with Kith on the third floor of the streetwear retailer’s SoHo store. In September, Hèrmes launched a four-day pop-up in NYC featuring Instagrammable installations, a café and live artist demonstrations, in addition to shoppable scarves.

“For luxury brands and retailers, it’s: How do we create something that’s exclusive, while also being inclusive,” said Melissa Gonzalez, founder and CEO of experiential retail agency Lionesque Group. “It’s walking a really fine line — then again, it’s hard to go wrong with a yacht.”