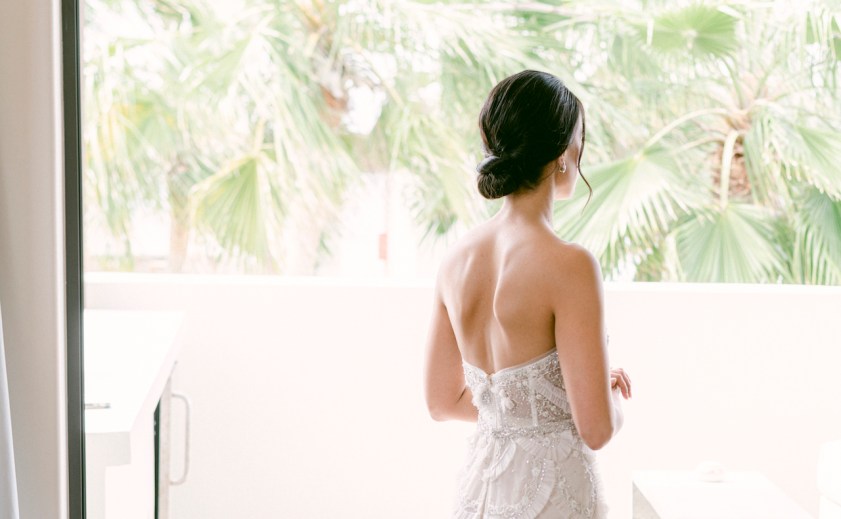 Bridal fashion brands are gearing up for the return of weddings

The wedding industry is gearing up for a major revival starting in May. Not only will mass vaccinations and warmer weather mean that weddings and gatherings are more feasible, but also, many weddings that were postponed in the last year have been scheduled for summer months. Essentially, two years of nuptials are expected to be stuffed into one season.

In a survey released in February, The Knot said that 47% more weddings are expected to happen in 2021, compared to 2020. As such, bridal brands and retailers are gearing up for the surge by investing in more inventory and marketing blitzes. Meanwhile, formerly non-bridal brands are seeing an opportunity to garner more sales by launching into bridal ahead of the wave.

Over The Moon, a bridal-focused editorial site, launched an e-commerce platform in September with over 125 brands and 4,000 products. Founder Alexandra Macon said the pandemic initially hampered sales, but the company managed to bolster sales of more affordable, overnight-shipped dresses for impromptu backyard weddings. Now, she’s anticipating that, by June and July, full-scale weddings will be back in swing. In preparation, Macon and her co-founder, Emilie Ghilaga, are launching a curated registry on Mar. 22. Along with wedding registry staples like cookware, it includes high-end fashion products from brands that don’t typically sell in the bridal space.

“It’s a split right now between traditional bridal brands and newer brands, but there’s a lot of interest from standard ready-to-wear, jewelry and accessories brands that are beginning to realize that bridal is going to be a major driver for business this year,” said Ghilaga.

Macon noted that, while weddings are coming back, the way brides-to-be are shopping has changed, especially their timeline. Prior to the pandemic, they’d buy their dress seven months ahead of the actual wedding date. Now, they’re waiting until much closer to the day.

Morgan Lane, a sleepwear brand that claims 10% of its business is driven by brides and weddings, paused wedding ads completely in 2020, even though some wedding sales were still happening. That was to avoid seeming insensitive to customers whose weddings were postponed, said founder Morgan Curtis. Now, she said, the company has a backlog of user-generated ad content from customers’ weddings that it’s ready to release beginning in May, when she anticipates the majority of weddings coming back.

None of the brands spoken to for this story shared exactly how much revenue they lost due to wedding cancelations last year, but all said that cancelations and postponements negatively affected sales.

Maggie Lord, vp and head of strategic partnerships at David’s Bridal, said the company was also sure its new bridal initiative — the Diamond Loyalty Program — was in place well before the wedding surge. The program, which offers points and rewards incentivizing customers to plan their whole wedding through David’s Bridal, was launched in December, but was intended for couples getting married later this year.

Andrew Blackmon, CEO of the Black Tux, said all wedding companies invested heavily in their supply chains and marketing in anticipation of the surge. Black Tux has just begun to see an increase in rentals planned for June, Blackmon said. In response, the company will increase the amount of inventory it typically holds. The Black Tux has 50% more inventory in stock than it did at this time last year.

“The last year showed us the importance of having a nimble team,” Blackmon said. “When demand drops completely and then comes back sporadically, it helps to be able to quickly shift personnel. We’re hiring temps when demand rises, and also hiring more people at our warehouses so we can ship wherever we need to at a moment’s notice. [Demand] also differs a lot by state. California and New York had barely any weddings and won’t come back as fast, but Texas and Florida are practically back to full volume already.”