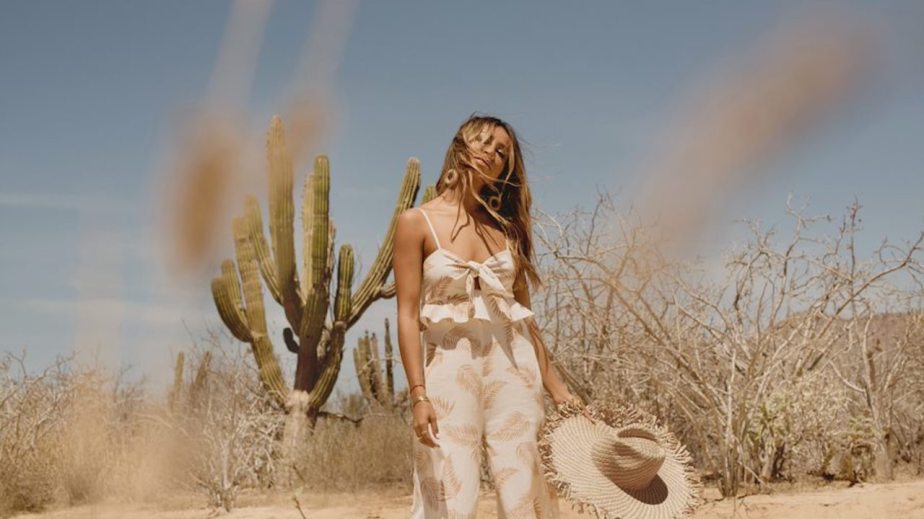 Thanks to a new collaboration with Instagram macro-influencer Julie Sarinana, 46-year-old surf-inspired fashion brand Billabong is now being sold at Selfridges in London, and Galeries Lafayette and Printemps in Paris.

The 40-piece Billabong x Sincerely Jules capsule collection launched on Tuesday on Billabong.com, in Billabong stores (there are 19 in the U.S.), and across the sites and stores of the brand’s retail partners. It’s the brand’s first influencer collaboration to be distributed globally.

“The buyers know Julie, and they were excited to see the product,” she said. “The collection is a bit more elevated than our mainline collection.” Styles range from $39.95 to $109.95.

Sarinana, whose @sincerelyjules Instagram account boasts 5.1 million followers, said her role in the collaboration spanned everything from design to the editing of the styles, which include swimwear, rompers and dresses. The collection, which took a year to come to fruition, is set to be a limited, one-time drop. However, Singer said the brand is very open to extending its partnership with Sarinana.

“We’ve worked with influencers in the past,” said Cathey Curtis, Billabong’s vp of global marketing. They’ve included Sydney-based influencer Elle Ferguson and, on the men’s side, musician Iggy Pop. “There are some that translate to different parts of the world and some that do not — they’re more heroes in their own region. Julie definitely inspires people on a global level.”

That the collaboration was met with excitement wasn’t a huge surprise to Billabong, considering the brand had worked with Sarinana as a paid influencer for three years prior to approaching her about a collab. Billabong had sent her to locales including Cuba, Costa Rica, Hawaii and Biarritz, France to create and share content featuring Billabong styles. Every time, her posts were met with great engagement, measured by likes, views and comments, said Curtis.

“We were all hopeful that the collaboration would have the same, strong global impact,” said Curtis. “The support we’ve seen from retailers alone serves as proof.”

Sarinana said, rather than work with brands for just a season or two, she prefers long-term relationships and often works with brands for a long period of time. Other brands she’s partnered with for extended periods include Soludos and Revolve.

Billabong’s biggest markets include Japan, Australia, Europe, the U.S. and Canada, said Singer, and its long-term retail partners are Macy’s, Urban Outfitters and Asos. Its new wholesale partners are comparatively higher end, a boon for the brand as it works to maintain current momentum.

Billabong, which caters to shoppers ages 18 to 24, has struggled in recent years as its signatures (like board shorts) have dwindled in popularity. In August 2017, it reported a sales decline of $77 million. In January 2018. It was acquired by Boardriders Inc., owner of Quiksilver, Roxy and DC Shoes, which planned to revive its sales to that of its late-1990s heyday.

Curtis maintained that Billabong is currently in a good place, though declined to share sales figures. “Billabong Women’s is on a continual healthy growth cycle, and we’ve really been working on that for the past five years,” she said. “The opportunity for us to work with people like Julie and with some of the better retailers we are working with is a really good reflection of that.”

On March 8, Billabong, its retail partners and Sarinana started teasing the collection via sneak peeks on social channels. Prior, to facilitate ease of promoting by the retailers, Billabong provided partners with an array of digital assets, including product imagery and images featuring Sarinana. While Billabong’s partner retailers often shoot their own images for their e-commerce sites, for the launch, 100 percent of them opted to feature Billabong’s images featuring Sarinana modeling the pieces, said Curtis.

For physical store displays, the brand invested in elevating its typical point-of-sale presentation to feature rose-gold hangers, imagery of Sarinana and fixtures featuring prints from the collection. The look and feel of the displays were carried through to store windows — 60 windows across the U.S. featured the Billabong x Sincerely Jules collection at launch.

In the stores of new retail partners, the brand set up larger-scale shop-in-shops. They kicked off with launch events, some of which included personal appearances by Sarinana.