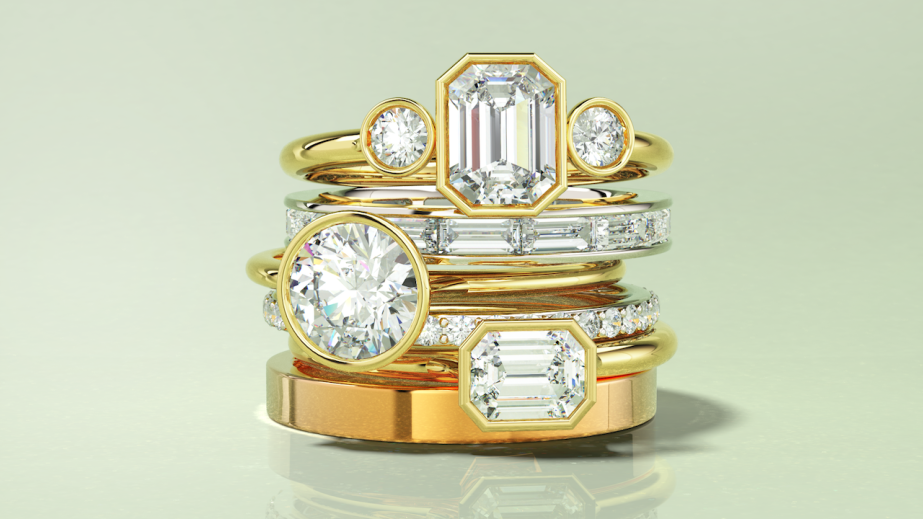 Beyond ‘purposeful confusion and paralysis of choice’: How DTC brands are updating diamond shopping

Like many experiences linked to weddings, engagement ring shopping is overdue for a makeover, and direct-to-consumer brands are stepping up to the task.

Within the last year, a number of DTC diamond companies have come to market, most selling comparatively affordable lab-grown diamonds, and each with their own schtick: Frank Darling launched in early March, with a goal of bringing honesty and romance to fine jewelry e-commerce. An online quiz narrows down its style selection to three recommendations for the shopper, and a Warby Parker-style home try-on kit lets them get a feel for four styles, but with fake stones. Digitally native brand Couple kicked off in October, with the aim of simplifying diamond shopping. It sells variations of four engagement ring settings available in four metals each, and one quality of diamond — all options are lab-grown.

Ada Diamonds launched in 2016, calling itself the first luxury jeweler selling styles with lab-grown diamonds exclusively, and ALTR Created Diamonds followed soon after. In 2017, Diamond Foundry opened a diamond lab in San Francisco, with a goal of creating 100,000 carats of lab-grown diamonds a year. It released a collaboration with Dover Street Market last week.

Jackie Courtney, founder of wedding dress resale company Nearly Newlywed, said on the Glossy Podcast that the wedding industry as a whole has felt no pressure to innovate, as it’s relatively under the radar. People go through the motions once, then move on.

Kegan Fisher and Jeff Ethan Smith started Frank Darling, which offers shoppers both man-made and natural diamond engagement ring options, decided to tackle the market after experiencing it firsthand. Both had come from tech-fueled, consumer product startups, working together at 3D-printing companies Shapeways and Sols.

“The diamond jewelry category feels like it’s been stuck for 20 years; it hasn’t evolved,” said Fisher. “It made no sense that I could buy a toothbrush online and have a better experience than buying a diamond.”

She pointed to expectations of spending the equivalent of three months salary on a ring and the process of the proposer shopping solo in an uncomfortable environment, usually with a guard and closed jewelry cases.

To flip the process, Frank Darling offers transparency on its website, listing prices of its 50 styles, in place of “price upon request.” An online quiz narrows diamond options to three recommendations: the most brilliant at the best value, the biggest available according to budget and the most brilliant. Both natural and lab-grown diamonds are included, highlighting that a two-carat man-made diamond costs about the same as a one-carat mined stone. The shopper can choose to try on four rings at home — all styles are unisex and available in sizes 2 to 13.

Currently, the company is made up of just four people: Fisher, Smith, designer Elyse Coleman (formerly of Tiffany & Co. and Eddie Borgo) and a gemologist who doubles as a concierge for online shoppers. Since launch, Fisher said, the company has been working to increase inventory, as current demand for try-on kits outweighs quantity. Lab-grown diamonds have sold best so far, and there have been constant requests to see the diamonds before purchasing. To accommodate customers, Fisher and Smith have made visits to shoppers in New York and are now exploring how to better show off the diamonds online.

Couple went the traditional DTC brand route by teaming up with an agency on branding (Gin Lane, behind brands like Hims and Harry’s), raising VC capital and serving up styles based on the “only one you need” model.

“We took out that purposeful confusion about the ‘4 Cs’ and eliminated shoppers’ paralysis of choice,” said Couple co-founder Jeff Brenner. “Our take is: We’re here to guide you, and we’ve optimized this whole experience for you.”

Brenner said working in diamonds is a different ballgame than that of most DTC brands, which deal in products in the $20 to $50 range, or up to $1,000 for a mattress. “Our rings can be tens of thousands of dollars,” he said. “It’s an opportunity, as online [diamond] sales are on the upswing, but it’s also a challenge. We need to make sure we’re delivering an experience that’s better than what they can get at a local jeweler.”

Even some traditional jewelers are getting into the lab-grown diamond market. In September, amid sliding sales, De Beers launched Lightbox, a collection of jewelry featuring lab-grown diamonds selling for $200 to $800.

Tiffany & Co., however, has no intention to go there. Upon request for an interview about the growing lab-grown diamond market, a press contact replied with a go-to prepared statement for press. In part, it read: “We do not believe that lab-made diamonds are a luxury product and, as such, we do not intend to use them in our jewelry.“

Currently, lab-grown diamonds make up 2%, or $1.74 billion, of the diamond jewelry market, according to Zimnisky. They’re expected to reach 5% of the market by 2035. Selling points are that they’re cheaper, typically sold for 30-50% less than natural mined diamonds, and they’re indecipherable to the untrained eye from natural stones. They’re often marketed as eco-friendly, though creating them requires a great deal of energy — whether man-made or natural diamonds do greater environmental damage is up for debate.

Lab-grown diamond companies also regularly describe themselves as conflict-free, pointing to diamond’s long-term association with violence and exploitative labor. The Kimberley Process, established in 2013, looked to solve those issues, though it’s been criticized for its holes: It certifies diamonds as being conflict-free yet doesn’t require diamonds to be traced to their country of origin. A number of communities in developing countries are heavily reliant on the mining industry.