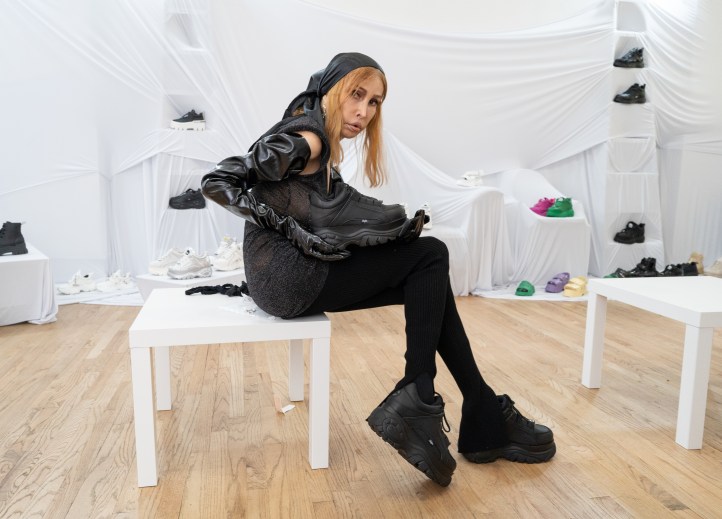 Buffalo, a rave culture-bred German footwear brand launched in 1979, is upping its focus on the U.S. market.

Along with introducing creative direction focused on subculture and artists, it will lean into retail locations and marketplaces for local growth and expansion.

Buffalo doesn’t publish its sales numbers, but the company shared that it’s seen strong growth, particularly in the U.S. and Asia. This week, it’s hosting a pop-up lounge at NYFW, and last month, it launched Buffalo Studio, an arts foundation project based at Black Stallion Trading studio in NYC’s SoHo. The foundation is hosting the works of a different artist each month, as the brand looks to connect with the art scene in the U.S. “We want to start with the top-tier group of influencers. For us, that’s contemporary artists,” said Ruth Gruca, CMO of Buffalo.

“Before the pandemic, we did a fashion show and some more traditional marketing [in the U.S.], and then we had to put things on hold when Covid came,” she said. Now, Gruca hopes the brand will be able to establish the level of awareness in the art world that Redbull has had in extreme sports and music.

The company is particularly focused on an older customer base in the U.S. “We want to tap into the people who grew up with the shoes and love the shoes — an older, edgier millennial audience,” she said.

Initially founded in Germany as a boot company that sold Mexican cowboy boots to the German market, the brand began making more sports-inspired shoes shortly after. In 1995, it came out with its “Classics” and “Cloud Sole” sneakers, which quickly became popular, worn by Cher, Madonna, N’Sync and the Spice Girls. It’s safe to assume they’ve served as inspiration for newer cult sneakers like Balenciaga’s Triple S. Today, it’s Billie Eilish and Bella Hadid who wear Buffalo’s sneaker styles.

Buffalo shoes, which sell for $195-$275, have been available online in the U.S. since 2018 through Farfetch, Luisa via Roma and Opening Ceremony. According to a 2021 interview with Buffalo COO Mirko Ostendoerfer, its online sales represent about 17% of the business. The plan is to grow that to 30% over the next three years. Buffalo also plans to extend its licensing business to include sunglasses, bags, accessories, fragrances and clothing.

“The brand is all about celebrating this subculture of the arts,” said Gruca. “The whole idea of [Buffalo] Studio is that we give the artists shoes, and they’re inspired by them and produce a piece of work — whether that’s [via] writing, physical sculpture or something digital.” The pieces are then auctioned off to different charities. The brand wants to support relevant American social causes, like women’s issues and LGBTQ+ rights.”

Along with having a presence at traditional art exhibitions like Frieze, The Armory and Art Basel, the brand’s marketing mix moving forward will include partnerships with writers, directors and TikTok stars. “You can find an underground TikTok star that has 300 followers but is creating amazing content. To me, that’s an artist,” she said. The brand will launch a dedicated Buffalo Studio Instagram and TikTok channel before the end of the year. In addition, Gruca said Buffalo will continue to collaborate with fashion houses; previously, Buffalo partnered with Junya Watanabe in 2018 and Vivienne Westwood in 2019.

“On the retail front, we would like to position the brand in lifestyle stores that project exclusiveness and appreciate the heritage aspect of the brand,” she said. “And we will be continuing to turn our New York showroom into an active space for our community.”