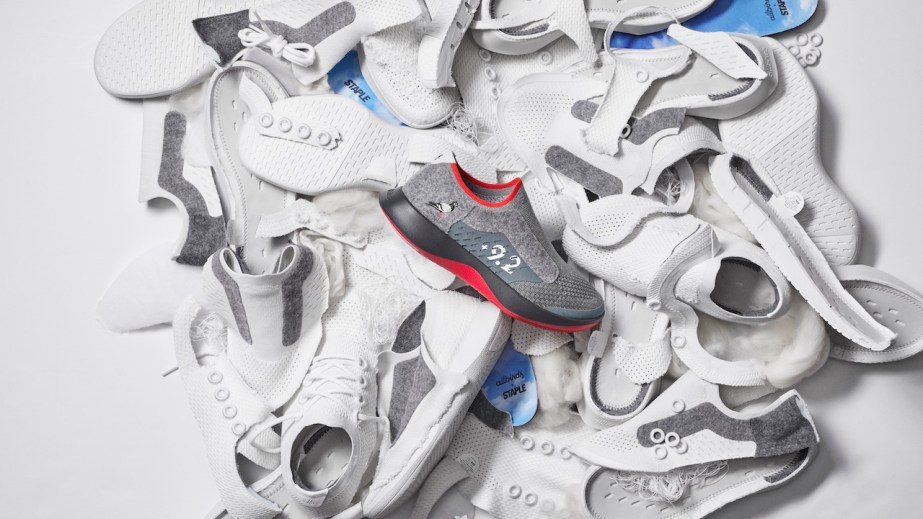 With its new collab, Allbirds aims to reach sneakerheads

The included shoe, which fuses Staple’s design and Allbirds’ existing Tree Dasher style, features the Carbon Footprint label on the outside of the shoe, which is intended to spark discussion about sustainability. The Carbon Footprint number, which represents the shoe’s carbon impact, has to date been featured on the inside of Allbirds styles. The shoe is available on Allbirds’ e-commerce site and at its New York retail store for $150.  The collection also includes a $58 T-shirt and $16 socks, sales of which will benefit the Sunrise Movement.

Staple and Allbirds founder Tim Brown are counting on the unexpectedness of the collaboration to drive interest in the collab, which will be hyped on Allbirds’ digital marketing channels and promoted to Staple’s more than a quarter million Instagram followers. For Allbirds — which raised another $100 million in September, bringing its valuation to $1.7 billion — it represents a chance to test the waters of the broader sneaker world by using an influential figure within the streetwear community to draw attention to the things Allbirds specializes in: straightforward and sustainable footwear.

This collab isn’t the first attempt at streetwear for Allbirds, which also launched a small collaboration with Chinatown Market in August. But most of it’s previous collaborations have been with brands with like shoppers, like Outdoor Voices and Shake Shack. Staple has been in-demand as a collaborator this year, partnering with over a dozen brands including Nike, Cole Haan, New Balance and Fanta.

Glossy spoke with both Brown and Staple about the collaboration, sustainability and the sneaker industry. This interview has been lightly edited for length and clarity.

How do you think Allbirds is viewed by the hardcore sneaker community? And how do you think you can fit into that world?
Tim Brown: In some ways, we are completely the opposite of how hardcore sneakers are made and sold. From the beginning, we were all about reducing sneakers down to their simplest forms, all about reduction and designing one simple shoe that could be the hero product, and investing in materials. That’s really the opposite of the streetwear market, which is all about constant newness — new models with small changes releasing all the time. We don’t want to present ourselves as something we’re not. We’ll never be that, but what we can do is showcase what we’re interested in — sustainability — and see if there’s a way to make that appealing to that crowd.

That’s why it’s been great to work with Jeff. He came in and didn’t want to create something entirely new. He took what we had — the Carbon Footprint number — and decided that that needed to be the main feature, the focus of all the storytelling.

Jeff Staple: We knew from the beginning that a challenge would be [consumers’] knee-jerk reaction to seeing the name Staple and Allbirds together. It would be surprising, and people will ask questions about whether that’s a good fit; we knew that was coming. I like poking the bear and shaking up the way people in streetwear and sneakers think about things.

TB: It is a bit like putting New York City and Topeka, Kansas together.

Do you think there’s room for sustainability in sneakerhead culture?
JS: The unfortunate thing is that the better you are at being a streetwear fashionista, the worse you are for the environment. All the constant releases and constantly getting new things has an impact on the environment. That’s why the number on the shoe is so important. It’s a statement that says: This shoe has an impact on the world. It has a cost. Allbirds is carbon neutral, and to work with them, you have to be carbon neutral, too. So Tim helped us get my company to carbon neutrality a couple of months ago before we could do this. You can get it down to a certain point, but then you can’t really get any lower without cutting jobs and sacrificing quality and such. So we offset the last $10,000 or so of carbon neutrality with carbon offsets.

TB: And that’s all well and good to use carbon offsets as a temporary solution. They can only go so far, so you do need to constantly be coming up with better ways to do things. It’s good to hold yourself accountable, but if you’re just relying on paying off your carbon impact all the time, your financial people won’t be very happy with you.

JS: In companies big and small, one common thread is that when you piss of the CFO or the accountant, that’s when things change. And, look, we know we’re not going to solve climate change overnight. There is a bit of a hesitancy toward sustainability in streetwear, but if we can just get a few kids to start thinking about these things and realize that you can be stylish and into sneakers and be conscious of the world, that’s a win for me.

It’s no exaggeration to say the market is dominated by Nike and, to a lesser extent, Adidas. Is there room for brands like Allbirds to take a bit of that market share as well?
JS: If you look at the footwear market traditionally, yeah, it does look tightly siloed. It looks like two or three behemoths and everyone else fighting for scraps. But Allbirds is a brand that’s less than 10 years old, which said, “Fuck all that,” and came at it from a completely different direction. Tim had no idea what he was doing in the sneaker world, and I think that’s why they did so well. If he knew more about the market, he might be tangling with Foot Locker and Dick’s Sporting Goods, and the brand would be forgotten about. But you can’t find Allbirds in the traditional footwear aisle. They built their own entire ecosystem and have been completely successful. So I think there’s not only room for more brands, but also more ways of being a sneaker brand.

TB: There’s going to be a big upheaval in footwear and apparel at large around sustainability, soon. There may be brands not engaged with it now, but everyone will have to be in the next 10 years. And I take the idea that I had no idea what I was doing as a huge compliment, because it’s true.