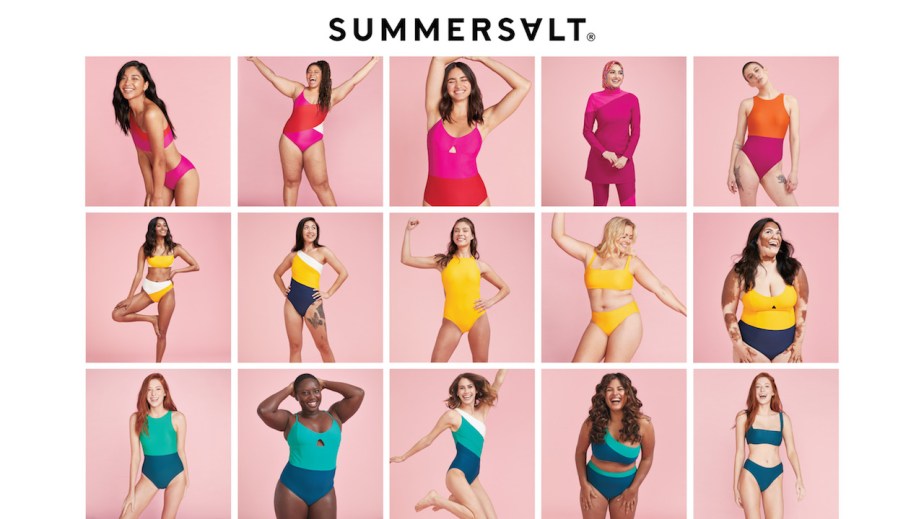 When Reshma Chamberlin and Lori Coulter launched their direct-to-consumer swimwear brand, Summersalt, in May 2017, competition in the category was heating up. Top-selling swimwear retailer Victoria’s Secret had announced it was exiting the category the year prior, resulting in a wave of new swimwear launches, including new direct-to-consumer brands focused entirely on swim (Andie Swim, Sidway Swim, Juillet) and lines by established fashion brands, including Reformation and Lively.

Summersalt had several advantages out of the gate: Coulter had a strong grasp on fit, formerly owning and running a made-to-measure swim line. In its 10-year run, she and her team scanned the bodies of 10,000 female shoppers, collecting 1.5 million individual measurements in the process. Serial entrepreneur Chamberlin had most recently been CEO and partner of design firm January, driving business solutions for DTC brands including M.Gemi and Rockets of Awesome.

But Summersalt’s fast trajectory, fueled by early funding and its styles’ subsequent popularity on Instagram, drove a big demand for customer interaction via a wide range of questions the founders didn’t anticipate. (The company declined to disclose revenue; it has raised $8.7 million in funding to date, with the most recent being a Series A round of $6.1 million led by Founders Fund in October 2018.) The company saw 50 to 75 inquiries a day, on average, by the end of year one.

Chamberlin now owes the influx of questions to the brand’s use of outside-the-box sizing (numerical “dress” sizes 2 to 24, versus XS to XL, for example), the “personal” nature of the swimwear category, in general, and the positioning of the brand, which she steered: It was intended to feel aspirational but also approachable.

In the first couple of months, Chamberlin and Coulter were handling most aspects of the business, including shipping orders. An intern was handling “customer happiness,” the brand’s in-house term for customer service. When the intern’s semester expired, Chamberlin took over answering customer emails, which already totaled hundreds a week.

“We realized there was no way we could leave [customer service] to even an army interns or treat it like an afterthought,” she said. “It’s really the bedrock of what we built and were trying to build, and we had to find a way to respond to customers in an efficient, thoughtful way as we continued to scale.”

They hired one full-time customer service manager, but she moved on to a more corporate job within months, and a part-timer took on a good portion of the slack. The employee, recommended by the former manager, worked a few hours a day — she was a new mom with a masters degree, who had stepped away from full-time work.

“She was crushing it in the inbox,” said Chamberlin. “The customers felt connected to her. [Coulter] and I had to decide how we were going to round out ‘customer happiness’ responsibilities, and we decided we wanted more of her: grad students, new moms. There’s an underutilized workforce of women who can’t do traditional office hours but want to be engaged in something more.”

They looked to their personal network to recruit a pool of part-time customer service reps, aiming for women with good writing skills, who were educated and showed a passion for the brand and its aim of making women feel comfortable and confident. (“We’re happy to have men, too — but right now, it’s just women,” said Chamberlin.) They slowly accumulated 12 representatives, all of whom lived in Summersalt’s headquarters of St. Louis when they were hired. Representatives are now also based in Nashville and Austin.

Training is extensive, said Chamberlin, and is conducted with multiple reps at a time. The focus is ensuring each hire understands what’s different about each style, including the benefits of each, and how to use the company’s technology systems, so they can, for instance, update a shipping address. At the same time, trainees are encouraged to get personal with consumers, sharing their own struggles with their body, for instance — like, “Hey, mama, I know that jiggle. Let me tell you what suit works for me,” said Chamberlin. Each new hire is assigned a veteran “buddy” to direct personal questions to and speed up the training process.

In addition to answering emails, the customer service team is answering inquiries coming through on Facebook Messenger, Instagram direct messages and comments on social ads, among other touchpoints. Summersalt has a FAQ page on its site, but Chamberlin said swimsuit shoppers prefer the personal touch. Sometimes seven reps are working at a time, sometimes it’s two — the company’s goal is providing as much coverage as possible and fast response times.

While assisting shoppers, the customer service team is also collecting feedback. Their conversations have helped to evolve the line, revealing demand for the eventual launch of maternity and long-torso styles.

“We believe the brands of the future will find an incredible balance between technology and human interaction, when it comes to serving customers,” said Chamberlin. “For now, this high-touch service is what separates us from the big corporations, who outsource these things.”