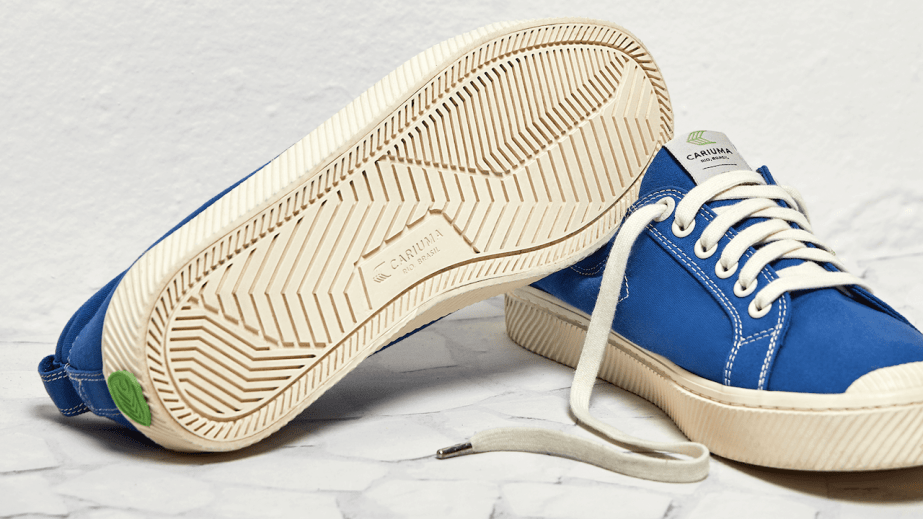 1 year in: How sneaker brand Cariuma is making a $1 million investment in sustainability pay off

When Cariuma, a barely-1-year-old DTC sneaker brand based in Singapore, was announced as part of Farfetch’s Positively Conscious edit of sustainable fashion brands in October, it became the youngest brand to ever be sold on Farfetch, according to co-founder Fernando Porto.

The DTC footwear sector is crowded, with big names like Veja and Allbirds already well established, but Cariuma co-founders Porto and David Python have managed to grow the company by 25% month over month, doubling the company’s sales every three to four months, since its launch last May. Porto said the company is set on competing with big footwear companies like Vans and Converse.

Classic silhouettes, sustainable materials and a DTC model are not uncommon features in the footwear space. Brands like Greats, Noah and the aforementioned Veja and Allbirds have all hit on these factors as customers increasingly look for more sustainable alternatives to big sneaker brands like Nike and Adidas. According to Porto, the best way for a footwear brand to stand out is to simply focus on improving product through iterating existing models based on customer feedback — something that larger, older brands are not as nimble at doing.

“Some of these brands have been making the same shoe in the same style for 50 or 100 years,” Porto said. “And it keeps selling, so they don’t have any incentive to change. So how do we compete with a big brand that’s been around for decades? We try to make a much better product than [competitors] — one that’s more comfortable and less wasteful. Anyone can mimic your marketing tactics or your brand messaging, but product is the core of it. So we focus on style, comfort and sustainability. Some brands are comfortable and look cool, but they’re completely unethical. Others are sustainable and comfortable, but they’re ugly.”

Porto wouldn’t disclose exact financial figures for the brand, only sharing it has raised $24 million in two funding rounds, established teams and offices in Los Angeles, New York, Singapore and Rio, and grown from two employees to more than 30, all within the last year.

Growing a company and getting the word out are particularly challenging for DTC brands, Porto said. In the first four months, Cariuma sold few shoes, compared to the current output. Python emailed a “significant percentage” of their early customers, many of whom found the brand through Instagram, from his personal email to solicit feedback on what the company was doing right and what could be improved. It’s a practice he still employs today, having corresponded with an estimated 4,000 customers so far.

Successful early collaborations with visual artists like Elisa Wong snowballed into larger collaborations, including Cariuma being named the official footwear partner of Pantone for the next two years’ Pantone Color of the Year collections, a distinction previously held by footwear mega brand Puma. That, combined with being listed on Farfetch, were significant contributors to the brand’s audience growth.

Porto said he and Python spent two years developing the concept of Cariuma before launching, with the majority of time and resources being spent on material development. Between the two of them, they poured more than $1 million into developing those materials. Porto considers this is the hardest part for a new DTC brand looking to get into sustainability: There isn’t much in terms of sustainable materials or technology out there for brands to use without having to develop their own.

“If you can’t invest in developing sustainable materials, what’s already out there isn’t enough,” Porto said. “That’s the challenge. But it could be easier. If someone like Nike decided they were not going to use any more virgin plastic and invested in the recycling infrastructure needed to make that happen, you could maybe triple the amount of recycled material available and make it cheaper for everyone. The materials take time and funding and iteration and testing the science to get it right, and if you’re a new brand with no funding, that can be really expensive and hard.”

Ultimately, Porto said the company’s entire strategy comes down to improving the product and making it less wasteful and more comfortable than competitors like Vans or Converse. For example, constructing shoes from three whole pieces with only two stitch points, as opposed to more than 12 pieces like some other brands, can reduce waste by 50%. Weaving fabric into the pieces required, rather than cutting those pieces out of larger sheets of cloth, reduces wasted cloth from 45% to 2%, said Porto. The company cut ties with a factory weeks before a product was set to launch when it was discovered that the factory had lied about some of its ethical standards, delaying the product by months.

Both Porto and Python have years of experience in fashion, both working for Brazilian footwear company Arezzo as head of USA and commercial director respectively, and their connections made have helped them launch the brand with the ability to ship to 29 countries. A year in, it ships to 60 countries.