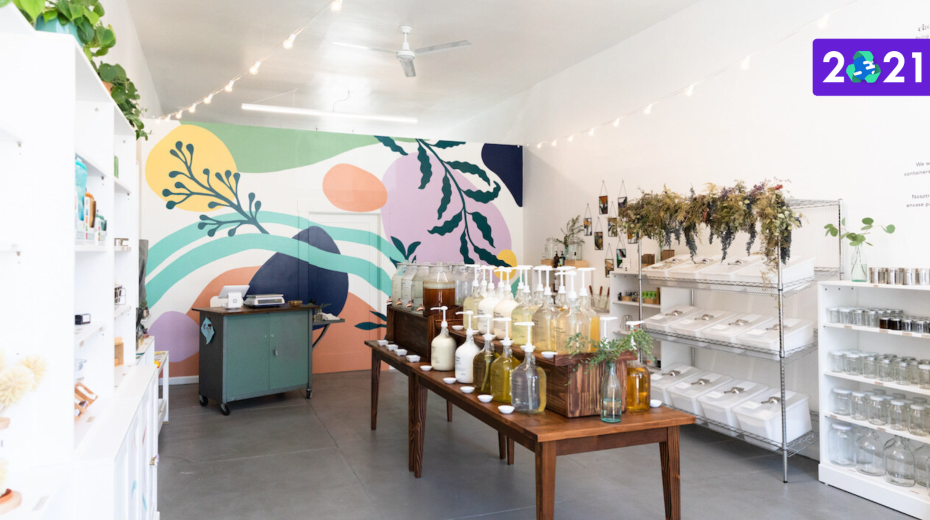 Zero-waste moves from niche to mainstream

Today’s story is part of Glossy’s Earth Week series, which spotlights sustainability efforts and topics across the beauty and fashion industries.

When Tara Pelletier co-founded her sustainable personal care brand Meow Meow Tweet in 2009, it was one of the early brands to sell shampoo bars. But most people were not interested.

“There were so many times where we almost discontinued it because it was not popular at all,” she said. “And then two years ago, the low-waste movement starts picking up,” making the shampoo bar one of the brand’s top-selling products.

Plastic-free shampoo bars are one of the many product categories that have surged in the past few years as the zero-waste movement has taken off on social media. Indie brands and large conglomerates alike are developing sustainably-minded, plastic-free products such as toothpaste tablets; cardboard containers for everything from deodorant to lipstick; and circular refill programs. The branding has also evolved, moving from granola to chic.

The zero-waste movement has been spurred by influencers, like Bea Johnson, the author of the book “Zero Waste Home.” These influencers have subsequently impacted the rise of zero-waste brands. Pelletier said that zero-waste Instagram influencer Lauren Singer “is responsible for making our particular shampoo bar popular, because she basically just said that she washed her hair with it.” The founder of Brooklyn-based Package Free Shop, Singer gained attention after a viral video showed she fit two years of trash in a mason jar.

“Social media is really important to this movement,” said David Phan, founder of plastic-free tooth tablet brand Huppy. “The zero-waste movement isn’t new. It didn’t start two years ago or four years ago, but it’s really taken off in the past couple of years because of social media, and [the many] cool, innovative brands that are starting new concepts that do new things.” In addition to Instagram influencers, Huppy works with sustainability influencers on TikTok, such as one who goes by Sabrina (@sabrina.sustainable.life) and also founded the EcoTok account.

“That turning point is still happening right now [for consumer awareness],” said Phan. “If you asked someone on the street or a friend if they’ve heard of toothpaste tablets, my bet would still be no. It’s still a relatively new concept.”

“Zero waste is trending, but the practices have been around for a long time, especially in Indigenous communities,” said Pelletier.

Not all brands associated with the movement call themselves zero-waste; Meow Meow Tweet prefers “low-waste” instead.

“We are strict in how we define zero-waste for our brand,” said Luana Bumachar, vp of owned brands and innovation at Grove Collaborative, of its new bar soap and shampoo personal care brand Peach. “We look at it holistically. I’m always concerned about using the word ‘zero.’ There’s always waste happening in the supply chain. Our goal is to minimize it as much as possible.”

“Aspirationally, zero-waste is a really great movement to just bring awareness. Not everyone’s trash can reasonably fit in a mason jar,” said Cary Lin, the co-founder of skin-care brand Common Heir, which packages its skin care in single-use biodegradable capsules stored in a cardboard container. “That’s why we wanted to move away from specifically saying that we’re zero-waste, just because there’s always going to be waste somewhere.”

Meow Meow Tweet was sold through the Vegan Shop-Up in Brooklyn in its early days. It made its way into Brooklyn-based zero-waste retailer Package Free Shop when it opened in 2018. It’s now stocked in two dozen zero-waste shops including The Refillery in Los Angeles as well as The Detox Market and Whole Foods in Canada. The brand launched a bulk offering and has been expanding alongside local refilleries that have popped up across the country.

“I would say every major city has one now,” said Pelletier, of refilleries.

Los Angeles is currently the refillery capital of the U.S., with a range of zero-waste retailers including Sustain LA and The Well Refill selling in bulk.

“I think we’re tipping into refill being a significant demand,” said Leslie Campbell, the founder of Sustain LA, which opened its first brick-and-mortar store in 2019. While the retailer has had to switch to a drop-off and delivery model during the pandemic, it is in expansion mode as it seeks out two new locations in L.A.

Refill models have also gained more traction in the last few years. When Bathing Culture’s Tim Hollinger co-founded the brand in 2017, he proposed a refill model to partners but was met with emphatic nos.

“The initial response was, ‘No, that’s a little too messy. We don’t really think people want that.’ And it was something we kept bringing up,” he said. He was able to convince some stores to set up refill stations in 2018, saying that “demand was great.”

“And so there’s this total switch that happens in 2019, where suddenly every store wanted to be doing a refill,” he said.

While the sustainable packaging model was mainly adopted by smaller brands first, it has been a much bigger challenge for a small startup to make demands on suppliers.

“When we bought our first round of paper tubes for our deodorant sticks, it had taken us two years to save up the amount of money that we paid,” said Pelletier. “The paper tube deodorant costs $1.75 and a plastic tube deodorant costs about 10 to 15 cents.” According to Phan, “the supply chain hasn’t caught up to” demand for plastic-free materials. “When you think about biodegradable materials, they have a shorter shelf life. They can’t hold on to that for such a long time without liability issues.”

The original purveyors of sustainable indie products have skepticism about conglomerates that are following in their footsteps. “I saw an article about Old Spice and Secret launching paper tube deodorants, which is hilarious, because it’s not like they reformulated,” said Pelletier. She also emphasized the importance of sustainability in the manufacturing process. “Like all things, is it going to be just a marketing point, or is it going to actually be something that brands embody behind the scenes?”

Now, the smaller brands that made big investments in the packaging innovation are facing growing competition from the conglomerates as they react to consumer demand and emulate zero-waste trailblazers.

“I’m hopeful that, as things move along, there will also be more options for the smaller refill stores like us,” said Campbell. “[Currently,] we’re having to figure out on our own what the refill method looks like. I look forward to [the category] growing. I do think that there’s enough interest to make that happen, and I do think bigger stores and brands are talking about it.”