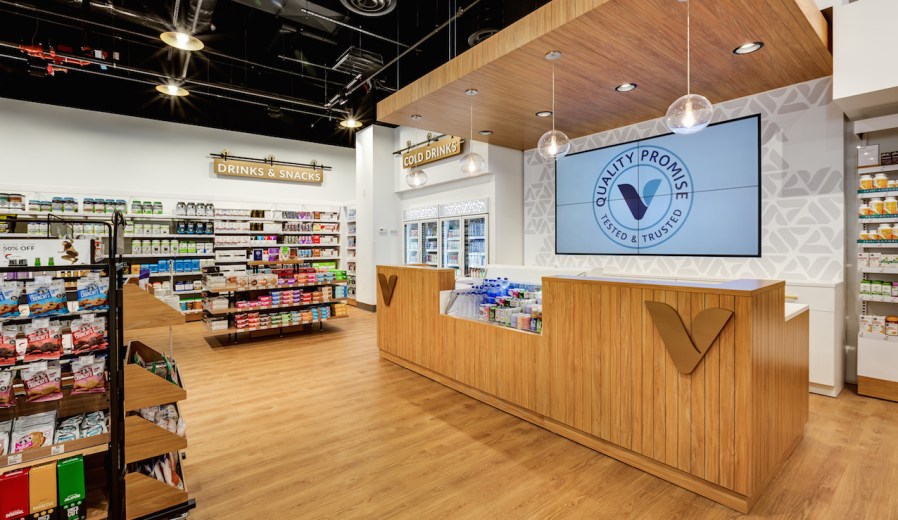 On Thursday, health and nutrition retailer Vitamin Shoppe is debuting a new store concept to position itself as a specialty destination for beauty.

The store, in Edgewater, New Jersey, is the first of a total of six redesigned stores that will feature beauty and beauty supplement brands at the front of the store for the first time. In total, it has over 700 doors in the U.S. Vitamin Shoppe’s customer base is 53% female and carries brands like CBD skin-care brand Miss Bud’s, personal-care company Dr. Bronners and ingestibles brand Vital Proteins. The stores themselves also include a modernized design with updated fixtures, heat-mapping technology to understand where customers travel within the store and in-store consultations with nutritionists. Throughout 2019, the retailer has been investing in a turnaround plan across multiple aspects of the business, including launching a personalized vitamin pack subscription, Only Me, and beefing up its internal social media presence.

“It’s about having an ownership presence in the [categories] you are carrying and delivering that in an immersive experience,” said Sharon Leite, Vitamin Shoppe CEO. “Our existing stores are like a run-on sentence — you don’t know when one category stops and another starts.”

Founded in 1977, the Vitamin Shoppe has seen better days, like direct competitor GNC, which is also undergoing its own turnaround efforts. In 2018, Vitamin Shoppe’s total net sales were $1.1 billion, a decrease of almost 2% compared to 2017. In its second-quarter earnings in August, the company reported that total sales were over 7% lower than the prior year and that it had closed four stores in the quarter. At its IPO in 2009, Vitamin Shoppe was valued at about $470 million. When Liberty Tax Inc. acquired the company in August, it was for a reported $208 million.

Vitamins, supplements and food alone make up $702 billion in the overall $4.2 trillion global wellness market, according to the Global Wellness Institute. While 85% of Vitamin Shoppe’s sales come through its physical stores, newer and sleeker brick-and-mortar wellness concepts have recently popped up. Dirty Lemon launched its first location called The Drug Store in September 2018, and Goop announced a seventh permanent store, coming to San Francisco in November. Ulta and Sephora have also taken to stocking more ingestibles brands such as Hum Nutrition and The Beauty Chef.

“Nutritional supplements are no longer something underground that only gym rats consume,” said Joshua Schall, an independent consultant specializing in health and nutrition brands. “Supplements are no longer only available at The Vitamin Shoppe or GNC, so it’s pivotal that these legacy retail brands elevate their game to survive.”

The new stores are also meant to court beauty consumers, a key strategy for positioning the category at the front of the store. Vitamin Shoppe organizes its beauty offerings by cross-merchandising external and internal products, such as internal collagen supplements with external collagen topicals. Additionally, beauty assortments now include aromatherapy with packaging that communicates that beauty is part of a wellness regimen. Behind the scenes, Vitamin Shoppe has been revamping how it is communicating its offerings to existing customers as well as ramping up its outreach to new customers. In 2018, the company began focusing on personalized emails with product recommendations based on consumer interactions on VitaminShoppe.com, and it spent 27% more in social media advertising and 50% more in video advertising across YouTube and social media in the past year, the company said.

In addition to the new store concepts, Vitamin Shoppe is planning to look at additional retail possibilities, such as shop-in-shops, said Leite. The idea there, as well as with its new stores, is testing changes to its current model.

“If you think about how the consumer shops, it’s not about bricks and clicks, but it’s about interrupting the pattern of shopping for the consumer and servicing them where they are,” she said. “We will try to be more disruptive about where we show up.”