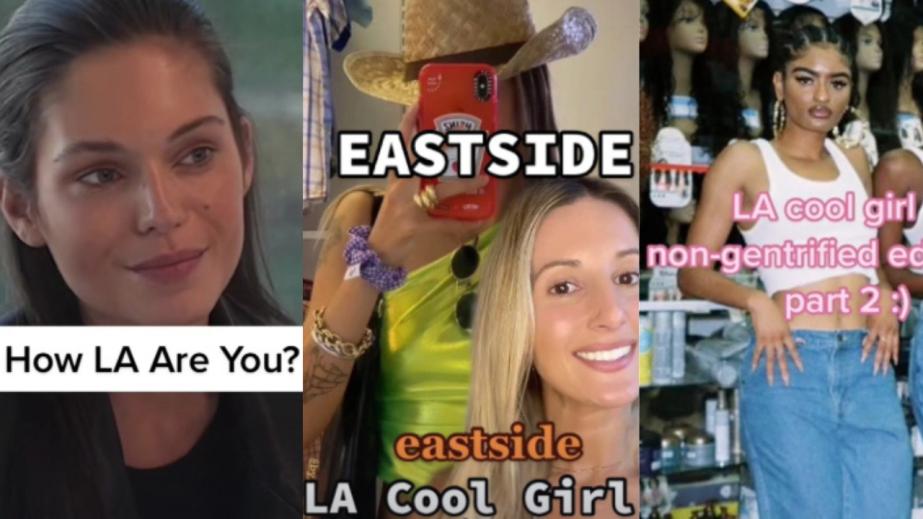 If you’ve found your way to the Los Angeles side of TikTok dubbed #LAtok, you’ve likely encountered content touting the “L.A. Cool Girl.” The hashtag has 9.1 million views at the time of this article’s publication. And if you’re a thin, white, Moon Juice-sipping, Erewhon-shopping female who calls Venice, California your “sacred space,” these videos may hit close to home.

“There are so many cool neighborhoods in L.A., but the L.A. Cool Girl really spends most of her time in Venice. …,” says a line from one of the original polarizing videos posted by the concept’s creator, TikToker Lisa Rosen (@lisarosentv; 9,400 followers). “Her aesthetic is beachy, kind of modern, and she always has fresh flowers from the farmer’s market.” Rosen has since gone on to create an entire series of more than 20 related videos, ranging from “L.A. Cool Girl Wedding” to “L.A. Cool Guy.” Each video features a certain depiction of an L.A. inhabitant in 2022, with the tagline in Rosen’s bio listed as “no one knows what she does.”

Rosen has received flack for her content and her decision to disregard constructive comments, sometimes disabling them altogether. Some of the negative responses include, “You should call yourself ‘the la gentrified girl” and, “Take down your eastside video. Don’t disrespect East LA like that.”

To a large population of native Angelenos, who reside everywhere from Pico Rivera to Van Nuys, “L.A. Cool Girl” content diminishes L.A.’s rich, cultured history and distorts the meaning of “cool” in the large, minority-driven city. In fact, according to the U.S. Census Bureau estimates in 2019, Los Angeles County’s population was 48.6% Hispanic (including mixed races), 25.9% non-Hispanic white, 14.5%  Asian and 7.7% Black.

“‘L.A. Cool Girl’ is loosely based on my experience as a TV producer,” Rosen said. “It’s a rebel aesthetic with no rules other than, ‘Be yourself.’ She’s an interpretation of creative culture in Los Angeles, inspired by celebrity style and my background in the entertainment industry. Everyone has different experiences in L.A. — that’s the whole point of this series. It’s exaggerated and over-the-top, and everything is done in character, even down to my delivery. It’s all to embody the message that there are no limits for self-expression.”

Born and bred in Central L.A., Korean-Latina TikTok creator Amanda Pluma (@imamandapluma; 63,200 followers) posts regularly about her L.A. upbringing, her favorite local haunts and her takedown of “L.A. Cool Girl” culture. The latter includes a TikTok video with more than 500,000 views with a caption telling Rosen to “go colonize somewhere else.”

But Rosen said there are “false assumptions” regarding her original video, titled “L.A. Cool Girl Eastside Edition.” She explained, “I depict the lifestyle of someone who works in entertainment and lives near East Hollywood. … [But to other creators] it looked like the glorification of gentrification in East L.A., which is not at all what I described.”

In another TikTok video, calling out Rosen’s “Eastside” content  (with approximately 70,000 views), Vanessa Acosta (@fromabolivian; 5,900 followers) said, “We are seeing the erasure on social media of the culture and the people of color who actually made this city … especially when it’s this annoying and oversaturated and overdone push of this aesthetic of the L.A. Cool Girl.”

When asked, L.A.-born and -bred Rosen said, “I love getting feedback and hearing from all types of perspectives, but I was receiving an extreme amount of backlash all based on misinformation. My comment section was becoming filled with hateful views and threats of violence, to the point that I turned them off. Commenters felt like I was trying to silence their voices, but it was not an environment to have any sort of productive conversation.”

That said, the aesthetic largely encompasses TikTok’s “Clean Girl,” which is often associated with Hailey Bieber. The trend was coined to address a look that includes a slicked-back low bun worn with hair parted down the middle, and gold hoop earrings. “Clean Girl” style, too, has come under fire for cultural appropriation. Minority communities in L.A. and beyond have taken to the app to educate users on its origins.

L.A.-based Latina creator Ashley Natt (@lipstickittty; 94,500 followers) posted a video about getting in trouble in her school days because her “hoops were too big.” In the clip, which has been viewed at least 376,000 times, she went on to say, “It’s the fact that [white creators] rebranded something we’ve been doing for a long time as the ‘clean girl aesthetic.’”

She added, “But when women in my Mexican community and the Black community were wearing gold hoops, slicked-back hair, gold chains, nameplates and acrylic nails, it was ‘ghetto.’ I think it’s diluted our culture outside of any urban area. From my experience in East L.A., that’s how the girls looked cute during the 2000s, but the media called it lazy, ghetto and tacky [back then].”

Pluma’s biggest issue with the “clean girl” aesthetic is the exploitation of gold jewelry.

“The meaning behind the jewelry has become diluted,” she said. “At least in the Mexican community, jewelry is the first thing you get as a baby. Gold earrings, bracelets and a nameplate, it’s almost like a rite of passage. Anyone can wear what they want. However, it’s important to remember the women who spearheaded these looks and dealt with the negative criticism before it was in style.”

Nationally recognized beauty and fashion brands have famously struggled with inclusivity, even recently. Glossier came under fire in 2020 when former employees spoke out about racism, with then-founder Emily Weiss pledging to do better. The company laid off more than 80 employees earlier this year. Meanwhile, Revolve was called out in 2018 for failing to represent curvy women and women of color. The brand was then prompted to donate $1 million to social justice causes in 2020 after failing to address Black Lives Matter in a timely manner. When they took heat for their absence of acknowledgement, they admitted they “f—–d up” and “will do better.”

As for her part as a content creator with a large platform, Pluma said, “I share videos explaining and analyzing trends that hurt minorities. I believe they do make a difference because I’m giving people who want to learn an opportunity to hear a person of color’s perspective.”