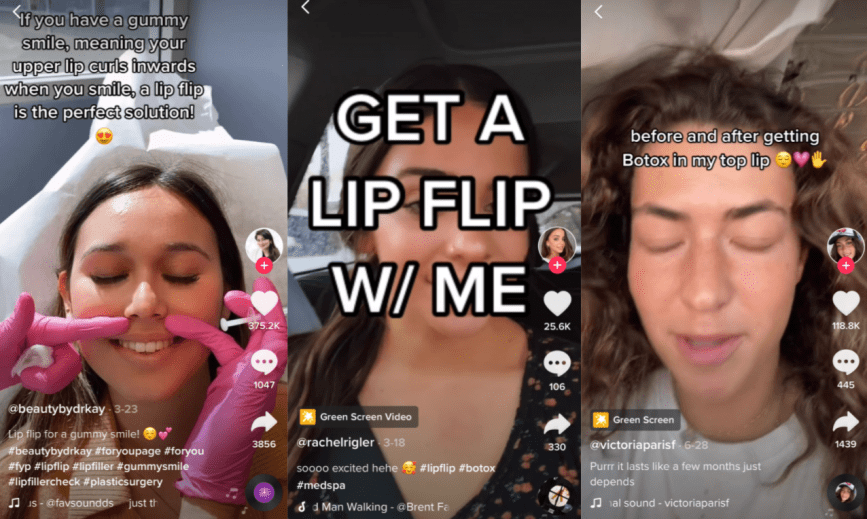 Social media has caused a shift in attitudes toward cosmetic treatments, from Botox and filler to lip flips. The latter is a “tweakment” that’s currently trending on social media. On TikTok, #lipflip has 64.4 million views.

But, what’s a lip flip? The treatment uses a neuromodulator (like Botox or Xeomin) to mimic the effects of lip filler, though the results are less dramatic. “When added to the upper lip, it gives the appearance of a fuller top lip.” said Christina Nalbone, nurse practitioner and director of clinical education and operations at Ever/Body. She said that the treatment is pretty painless and that results are visible in 3-5 days. They last for about 6-8 weeks. The appointment is also quick — around 15 minutes, with no downtime.

Filler, on the other hand, is a little more involved and much more expensive. One syringe of filler at Ever/Body is around $750. A lip flip, meanwhile, costs around $150 and is Ever/Body’s most popular treatment with younger clientele. In June, Ever/Body hosted a “Lip Service” event with TikTok and Instagram influencers. Each was offered a lip flip after a consultation with an Ever/Body medical adviser.

But not everyone is a candidate for a lip flip. “Generally, when we smile, the top lip flips under to a varying degree for different people. For example, for someone who has a gummy smile, their lip tends to flip under a lot. Before we inject, we have the patient animate. We have them smile and pretend to whistle, so we can see how much their lip flips under,” Nalbone said. This is used to determine if a patient will see results from a lip flip. If someone’s lips don’t curl under when they smile, they may not be the best candidate. The Botox used in a lip flip relaxes the muscle, which causes the lip to flip out. Filler, on the other hand, simply volumizes. For those who get a lip flip, it can take a couple of days to readjust to speaking post-treatment, she said.

When TikTok introduced influencer Rachel Rigler (647K followers on TikTok) to the lip flip, she immediately wanted one, she said.

“I’ve always hated my upper lip when I smile, so when I saw a video about how [another TikToker] fixed her disappearing upper lip when she smiled [with a lip flip], I was like, ‘I need to do that,’” Rigler, who is 20, told Glossy. She searched for med spas in Savannah, Georgia, selected the one with the best reviews and made an appointment.

“It was my first-ever experience with Botox or any sort of injectable, so I wanted to document the process,” she said. The resulting video, which she first posted in March, has over 325,000 views. In the comments, many people tagged friends, saying they wanted to get one, too. But some people did criticize her for being too young, she said.

As for the adjustment period, Rigler said, “For probably the first week, my top lip was numb and it was hard to even brush my teeth, because I was like drooling on myself.” Ultimately, she wound up wanting more and got lip filler in June, which, of course, she also documented on TikTok.

New York City-based dermatologist Dr. Dan Belkin said there are many factors that are likely contributing to the treatment’s popularity. “It is a relatively easy treatment to get, in terms of its cost, pain, time, risk and cosmetic commitment, in the sense that it’s subtle and temporary,” he said.

Meanwhile, Plump, a cosmetic injectables clinic in Manhattan, has become a go-to spot for getting the treatment. That’s thanks in part to TikTok influencer Victoria Paris (1 million followers), who has posted about her experiences at the clinic multiple times over the past three months. Since her initial visit when she got the lip flip, she has gone back for various other treatments including Kybella and HydraFacial.

After Paris came in, Plump received an onslaught of inbound inquiries, said Richelle Oslinker, director of operations and partner at Plush. Paris first came in as a paying customer, Oslinker said, but she now gets a discount. She added, “We haven’t spent any money on marketing or PR… It’s been all social or word of mouth.” In the wake of Paris’ first post, Oslinker said Plump saw a 58% increase in people coming in. New customers cited TikTok or Paris’ name when asked how they’d found Plump. Paris’ friend Suede Brooks (1.4 million followers on TikTok) also went to Plump in March and posted a video of herself getting dressed for the occasion. The post has 626,000 likes.

“[Paris] came in and posted this video, and the next day, we had a million calls and emails like, ‘What is it?’ ‘What does it do?’… We actually weren’t prepared for it,” Oslinker said.