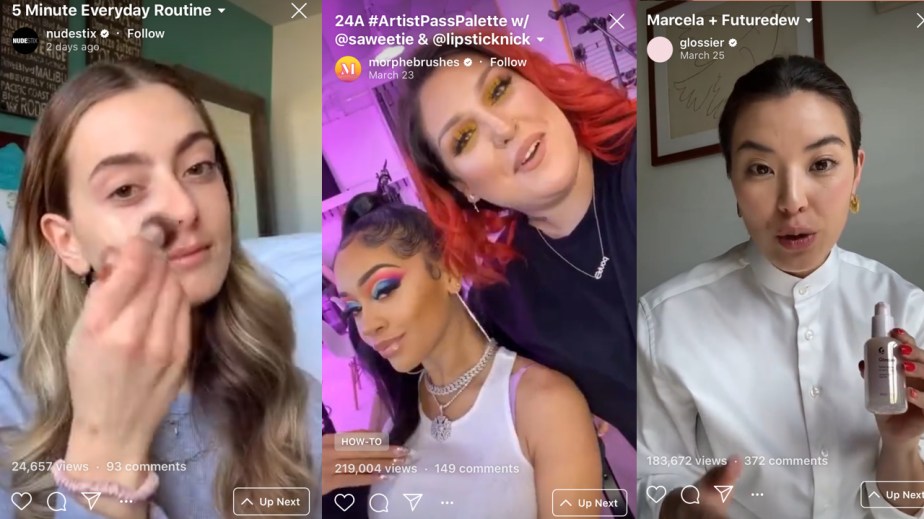 The rebirth of IGTV

Though long overshadowed by Instagram’s smash hit Stories feature, IGTV is receiving renewed interest from beauty brands as they pump out social content for users indefinitely stuck at home.

There has been speculation around the fate of Instagram’s longer-form video feature since it launched in June 2018: In January, Instagram removed the IGTV button from its homepage. Only 7 million people had downloaded the standalone IGTV app as of January, according to research by TechCrunch and Sensor Tower. This number has been compared to TikTok‘s 1.5 billion new downloads in the same time period.

“Since its very inception, IGTV has straggled along,” said Stacy DeBroff, CEO and founder of influencer marketing agency Influence Central. “I have never seen IGTV really catching on in terms of audience traction or people paying attention to it, or even being in the top 10 strategies that brands are pursuing.”

But during the widespread U.S. coronavirus shutdown, some beauty brands have been returning to IGTV after a period of dormancy. Glossier, for example, published a video on March 25, the first time it had posted to IGTV since September 2019. KKW Beauty, meanwhile, has posted six IGTV videos since March 25, but previously had not posted any since November 2019. MAC Cosmetics had not posted since last October, but posted on March 27.

“Before the quarantine started, we only had about six videos on IGTV, and now we’ve probably added about 12,” said Erica Tam, the brand director of Hum Nutrition, who said that the company is prioritizing IGTV over IG Live. “There are a lot of IG Lives out there already, and it’s great, but they’re not always that accessible” due to their set scheduled hours and limited time on the platform.

Smaller brands are also getting into IGTV for the first time ever as a result of Covid-19.

“We have never done IGTV before this; we’re complete novices,” said Nadine Abramcyk, the founder of nail-care brand Tenoverten. After the company had to shut down its five New York salon locations, it launched a DIY nails series on IGTV to promote online sales of its nail polish. “We’re just going where the need is, and if people stop watching them or we run out of content, we’ll stop doing them.”

Some celebrities have been posting more on IGTV, as well. Kim Kardashian has published three IGTV posts since March 26, the same number of videos she had previously posted between November 2019 and March 26; her last IGTV post had been in January.

Instagram has been doing its part to spur more creation on IGTV by launching plans for advertising that will give influencers a new financial incentive to post. According to a Bloomberg report, Instagram contacted a select group of video creators in mid-March to offer them a 55% share of advertising revenue on their IGTV videos. This matches the rate offered by YouTube.

Brands’ approach to IGTV is far from uniform. Some have remained active on the platform through its inception, like Tarte and Morphe, seeing high engagement on content even before the quarantine set in place. Morphe’s video featuring James Charles and K-beauty influencer Pony, for example, received over 926,000 views after being posted on IGTV on February 2; the same video received around 764,000 views on the brand’s YouTube account.

Others are still not sold on the platform even as they adapt their social strategies in the current climate. Many are opting to place their focus on IG Live, another Instagram feature that had been overlooked. Facebook announced on March 24 that Instagram Live and Facebook Live views doubled over the course of a week, and that overall time spent on its platforms had increased by 70% since the coronavirus crisis hit the U.S. It did not break down numbers for IGTV, however.

“On our end, we’ve been really focusing on IG Live,” said Nudestix founder Taylor Frankel, who said the feature “is generating a little bit more engagement than traditional IGTV.”

However, she’s prioritizing IGTV over videos in the brand’s feed. “I find that, for some reason customers are just so much more engaged on IGTV than they are on a typical Instagram video,” she said.

Frankel noted that the brand’s IGTV engagement has also increased in March and April compared to November and December of last year, with views up 39%, likes up 36% and comments up by 59%. She said the brand treats IGTV “as a library of educational content for our followers,” and has published five IGTV videos since March.

But DeBroff contends that IGTV will remain a “minuscule part” of what brands and influencers do going forward, despite coronavirus-related quarantines.

“Instagram Stories is where we’ve seen explosive growth,” said DeBroff, who said that the platform’s mid-tier influencers are seeing an average of 12,000 engagements (likes and comments) per Story post, compared to 1,000 before the quarantine period started.