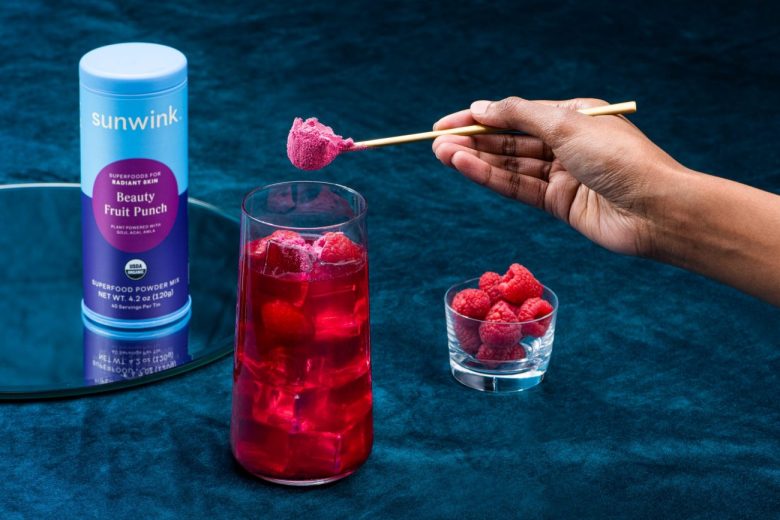 In June 2016, Gwyneth Paltrow, high priestess of Goop, shared a smoothie recipe with the world. The internet responded by tallying up the cost of the included tinctures, tonics and powders — the total came to $223, according to the Daily Mail. It also included ingredients unknown to the average shopper, like the Chinese herb He Shou Wu.

Six years ago, ingestible products were on the rise, with many geared toward improving one’s skin from the inside out. At the same time, ingredients like collagen became ubiquitous, and “superfoods” began inching into retailers beyond the local health food store. Still many people have continued to see these products as the province of the ultra-wealthy, or famous.

Now, a new generation of brands, many of which launched DTC, is aiming to reposition the category as younger, more affordable, less intimidating and more fun. And, as evidenced by pick up from mass, national retailers like Target and Walmart, they’re succeeding. The latest to do so is Sunwink, a colorful brand known for its tonics (bottled beverages) and powders. On December 26, three of those powders launched at Target, online and in stores. They include the Digestion Lemonade, the Beauty Fruit Punch and the Cacao Clarity version, which sell for $26.99 each. The brand is sold alongside other ingestible beauty and wellness products like Cocokind and Rae Wellness. The launch stemmed from Target DMing the brand on Instagram, according to Sunwink co-founders Jordan Schenck.

According to Sunwink co-founder Eliza Ganesh, making wellness accessible comes down to price, of course. “But it’s also about what the brand stands for and how they talk about wellness,” Ganesh said. She also emphasized that the brand does not equate wellness with perfectionism. “Most of us don’t have time for a three-hour morning routine.”

In advance of its launch at Target, Sunwink lowered the prices of its powders from $34. Sunwink launched in 2018 and formerly sold via its e-commerce site and Amazon.

Something as simple as a wellness product’s name also plays into making it feel more accessible. Take Digestion Lemonade, which features herbs including chicory root, amla and dandelion. Its name was part of its appeal to Target, Schenck said. “You need to [provide] more familiarity and education, if you want to integrate healthy things into people’s diets. You have to make sure that it’s understandable. People understand what lemonade and fruit punch flavors are,” she said. Target declined to comment for this story.

Sunwink is not alone in recently adding to Target’s wellness offerings. The DTC supplement brand Care/Of, debuted a line at the retailer in March 2021. At Target, the products are $14.99, except for the women’s prenatal vitamin, which is $18.99. The brand’s direct-to-consumer price points are significantly higher — most range from $40-$55.  And Golde, which makes latte mixes, among other superfood-based products, launched at Target last January. Its products sell for $15-$42.

Golde launched in 2017 with a “mission to make wellness truly accessible,” said co-founder Trinity Mouzon Wofford. “Part of that comes down to where people can find it. And being able to be stocked on the shelves of a major retailer that’s in your local neighborhood is a huge step forward on that journey.” Golde debuted at Target with a collection of “Super Ades,” three powder products, each sold in portable sachets ready to mix with water ($14.99 for six).

“Our priority was figuring out what the top trending benefits were for our community,” said Mouzon Wofford. “And [then we wanted to] create a product that was simple and easy to use, and gave them the benefit they were looking for.” Like Sunwink, Golde named many of its products based on the benefits they offer, rather than their ingredients. Those include Debloat Ade, Skin Hydration Ade and Destress Ade. However, other products in its line, like the Shroom Shield powder (which is now also available at Target), still have ingredient-based names.

For its part, Care/Of features a quiz on its website, asking new shoppers about their health goals, location and age, in order to “prescribe” them personalized vitamin packs. As such, the company has accumulated a wealth of data since its launch in 2016, which helped it determine priorities for its first retail line. Among its vitamins are those targeting sleep, focus and energy. Craig Elbert, Care/Of’s CEO, stressed the importance of recognizable ingredients when selling wellness products to the masses. Its Energy product, for example, features green tea extract. “A general consumer would be familiar with green tea, and so that resonates and builds trust,” he said. “But then we pair that with a little bit of discovery; it also features rhodiola, an adaptogenic herb, and yerba mate.”

Target is not the only big-box retailer expanding its wellness offerings. In June, New Zealand-based supplement brand Health By Habit launched at Walmart, with supplements priced at $8.88. The offerings range from benefit-based products, centered on energy, sleep and stress relief, to ingredients-focused products. Think: vitamin C and turmeric. As a subsidiary of a large New Zealand toy manufacturer, the brand is vertically integrated and creates all of its own packaging. To Liam Whittaker, the brand’s product and operations director, the increased availability of wellness products is a “byproduct of how much readily available information is to every person on the planet.” For new-age consumers, he said, health is about more than it used to be — hence the increased focus on mental wellness beyond just physical wellness. “People are moving away from prescription-based solutions to their problems and looking to naturals and lifestyle-based solutions,” he said. And now, they can find them close to home.