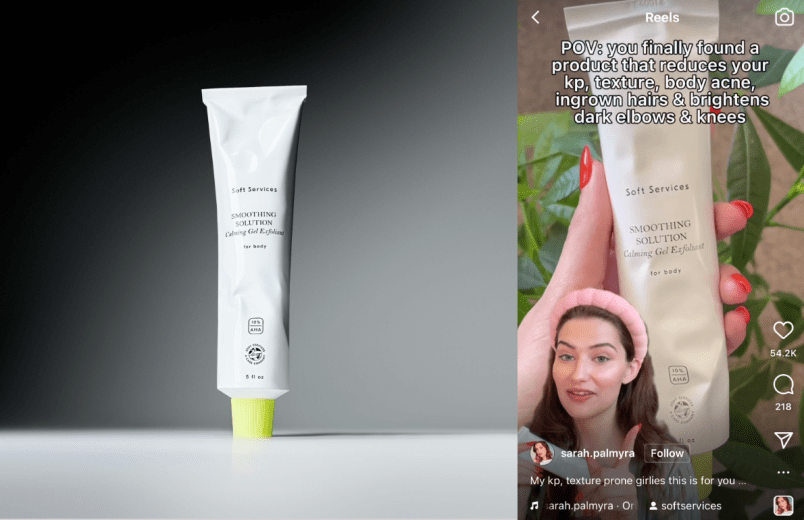 Today’s marketing landscape is somewhat unpredictable. Though brands have been told that Instagram is all but dead in the water and to pivot all their efforts to TikTok, body-care brand Soft Services recently found an exception through an influencer and her very successful Instagram Reels post.

Though Palmyra has more followers on TikTok, and the same video on TikTok has over 1 million views, Soft Services found it was, in fact, her Instagram that drove new customers and sales.

“With Smoothing Solution, we’ve always thought it was gonna be a slow burn to really gain steam with the skin-care junkie community. It’s this amazing chemical exfoliant for the body, but it’s a specialized product. … And then in April, we started to see it spike. I started to notice that Smoothing Solution was pacing two- to three-times above where it should be, in terms of [sold] inventory,” said Rebecca Zhou, co-founder and CEO of Soft Services.

As is common practice nowadays, Soft Services gifted Palmyra its products, but it did not pay her to post. Zhou said that the brand looks for influencers who will actually see a benefit from Soft Services’ solution-based products. “We don’t really want an influencer who doesn’t actually have, let’s say, body acne or KP selling a product that just doesn’t make sense for them,” Zhou said of the brand’s approach to gifting.

For her part, Palmyra said, “I decided to make a post about this product because, as someone with rough and bumpy skin and seasonal keratosis pilaris, I thought it was such a unique product. It has a gel-like consistency but it’s not sticky. It’s packed with hydrators as well as exfoliators, and has no unpleasant scent, unlike other products I’ve tried. And the results were unexpected. It definitely made a huge difference in the appearance of my legs over the course of a few weeks so I knew I had to talk about it. My job as a beauty content creator is to review products, but also, it’s to shine a light on brands and products that people aren’t talking about that deserve more praise.” She had been testing the product for around three months before she made the video, she said. And Zhou said she had been gifted the brand’s products around September.

Zhou said that, when she saw Palmyra’s post, she noticed that many commenters were asking if it was sponsored — it was not. And they remarked on the clear, smooth look of Palmyra’s legs, which she shows off in her post, calling it “glass skin on the body.”

Palmyra’s post, ultimately, had the kind of impact brands dream of when gifting influencers — which comes with no guarantee of a post, let alone a positive one that impacts sales. Between March and April, however, Soft Services saw a 5.3x growth in the sales of its Smoothing Solution, and it became the brand’s top-selling product in April. The product’s landing page was also the brand’s highest trafficked page in April, and “Smoothing Solution” was the biggest keyword from search traffic.

“It was really interesting to see Sarah’s posts on Instagram go viral in the way that we had only heard about on TikTok. Instagram has been almost written off. In marketing, you’re not really using it to grow the audience or hit new people who have never seen your brand, unless you’re paying,” she said. “We had to call up our lab and say, ‘Hey, we need that next shipment faster, because we’re gonna start running out.'”