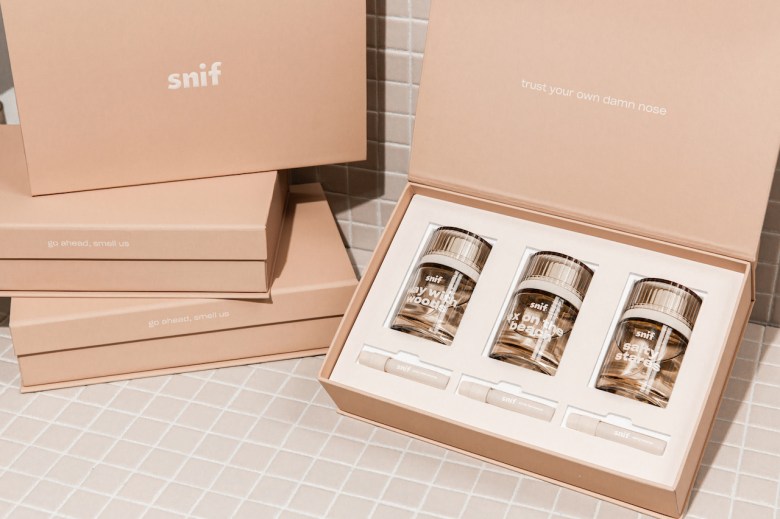 Beauty is known for innovation: Skin-care research is in constant evolution and makeup is always becoming longer wear or more intensely pigmented. But fragrance has, for the most part, remained the same. Sure, there was an onslaught of celebrity fragrances in the early aughts. But even those were mostly sold by aggressive salespeople shoving blotters in shoppers’ faces.

Six-month-old Snif, which calls itself a “direct to consumer solution to buying fragrance,” wants to change these norms. Making fragrance easy and fun to buy online is something the co-founders Phil Riportella and Bryan Edwards said no one had mastered. “We consider ourselves to be a counter industry or counter-counter culture,” Riportella said, as in counter to the perfume counter. Norms of the world of fragrance — including the concept of a signature scent (the co-founders envision a “wardrobe”) and the stark line between what is “feminine” vs. “masculine” — are standards Snif aims to change. Selling direct-to-consumer, taking gender out of the equation, and using a try-before-you-buy model are all ways the brand attracts a younger fragrance customer.

Upon the October 2020 launch, the brand was everywhere. Kim Kardashian-West and Kris Jenner posted the initial set of three fragrances to their Instagram stories. Riportella is engaged to Simon Huck, hence the connection to the Kardashians and beyond. In January, the brand introduced a single fragrance in collaboration with musician and influencer Harry Hudson called simply, “A scent by Harry Hudson.”

As for those department store fragrance departments, you could call them the antithesis of where Snif wants to sell fragrance. In fact, when it first launched, with three scents, Riportella (a former Fintech startup employee who’d previously worked at J.P. Morgan) and Edwards (a former management consultant at Deloitte) were so fed up with the industry and its antiquated, esoteric language that they didn’t even tell customers what notes were in each fragrance at all. That’s certainly a gamble when selling fragrance online. They wanted the customer to smell the fragrances for themselves, as scent is incredibly subjective.

Ultimately, for the second collection, launched in April, the brand pivoted by offering more intel as to what the fragrances actually smell like. “The genesis of Snif was fragrance is overcomplicated. The buying experience for fragrance is super outdated, right? You go to a fragrance counter, you’re bombarded by salespeople, you read a bottle of fragrance, and it’s written in this old, French, industry jargon. What is an eau de toilette vs. an eau de parfum? What does Mandarin neroli or radiant amberwood smell like?” Riportella said.

That said, he added, “[We] understand that some people know what they like…but the whole idea was to not guide the consumer. We wanted to give you your own experience.” To make this possible, Snif created a business model reminiscent of Warby Parker’s try-at-home program. Customers can order a full “collection” (there have only been two so far, each with three fragrances), and you’re sent a box with both full-size product and testers. You’re only charged for what you decide to keep. (Each fragrance is $65.) Should you decide to keep all three, you save $45 and pay $150 for the set. The goal, Riportella said, is to completely remove the risk of ordering fragrance online. Shoppers can trial the fragrances for a week before making a final decision.

The second collection’s best seller, so far, is Sweet Ash — it’s a sweeter scent than any of the options in the first collection. It was developed, in part, based on feedback from customers who expressed their desire for a sweeter option. The scents themselves are created in collaboration with the brand’s “scent board,” a group of 30 “tastemakers, but people who are outside the industry, and organic customers who have come to love us,” Riportella said. The group is 55% Gen Z and 45% millennial. Sixty percent identify as female and 40% identify as male.

The first collection is currently unavailable. When launching the business, the founders planned for scents to be limited edition. “We didn’t want to overwhelm someone with choices,” Edwards said. Moving forward, it will do product drops that will allow shoppers to sign up for a waitlist if they missed a previous scent or need to refill a favorite. “We’re shocked we have over 100 people signed up for each fragrance — they were only live for 5-6 months.”

The Harry Hudson collaboration has remained for sale, though, and is selling very well. “We wanted to find a partner who’s in line with Snif’s core values. Harry’s honestly just a breath of fresh air. And he wanted us to actually bottle happiness, which is what we did. And it was 2020. What better time do something like that?.” The resulting scent is heavy on lemongrass.

The Harry Hudson collaboration is a sign of what’s to come. “We’ve more or less demonstrated that we can, within a five-month timeframe, go from an idea or concept, and deliver a fully customized fragrance, bottle, packaging, website — the entire soup-to-nuts experience for a content creator or talent.” The brand will debut another collaboration in July.