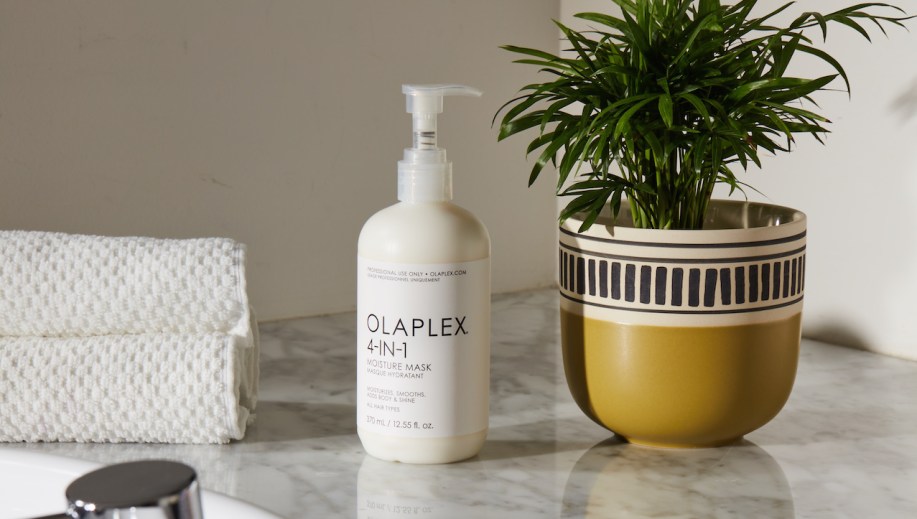 On Monday, Olaplex launched its first back-bar treatment since the brand first debuted in 2014. The launch aligns as people are heading back to salons on a regular cadence.

The back-bar treatment, called 4-in-1 Moisture Mask, is a concentrated reparative mask for severely dry and damaged hair and will not be sold within retail partners. It will be available in an undetermined number of salons. Olaplex began as a professional-only brand before expanding to consumer at-home products in 2017; it is sold through Sephora, Dermstore and Bluemercury, among other retailers. From July 12-14, the mask was exclusively sold on the Olaplex Pro App, which launched in February. It then became available for purchase through Olaplex.com.

According to JuE Wong, Olaplex CEO, the brand’s professional sales channel accounts for nearly 60% of its overall sales. DTC accounts for 25% of sales, and retail represents approximately 15%. Despite the challenge of selling through salons during Covid-19, Wong said the brand’s overall year-over-year sales doubled in 2020. According to WWD, Olaplex earned $100 million in 2019 sales and was valued at $1 billion.

Wong compared stylists who use Olaplex to dermatologists for hair, stating that stylists “prescribe the right product at the right amount for optimal performance, as needed by each client and patient respectively.” She added that the 4-in-1 Mask was in formulation long before she joined the company, in Jan. 2020.

According to Glossy’s previous reporting on the future of salons, recovery has been steadily improving since June 2020, when spas and salons were able to reopen. Management consultant company Kline noted a 98% jump in professional hair-product sales in Oct. 2020, compared to when salons were closed from March 2020-May 2020. New entrants into the bond-building category have also emerged, such as professional and at-home brand K18, and more advanced at-home offerings from Virtue, Philip Kingsley, Redken, The Inkey List and Amika. Olaplex is currently appealing a recent court decision that vacated a judgment the company had won against L’Oréal for patent infringement.

The new back-bar product quickly follows another Olaplex initiative targeted toward the professional side of its business. In another bid to support professional recovery and insert Olaplex into a client’s return to the salon, Olaplex created in June its Pro Artist Awards for cosmetologists, barbers and students in the U.S. and Canada. The award is divided into seven categories, including hair color, fantasy color, extensions and wigs. Digital entries are being accepted from June 25 to September 25, and finalists in each category will be announced in December. Public voting will determine winners in Jan. 2022.

“You don’t have to be a superstar hairdresser for us to notice you and embrace you. Part of what has grown our community is [that we] honor every hairstylist out there,” said Vanessa Schnieder, Olaplex director of social media. “The [awards entry] is not going to only be a hashtag. We’re going to [repost] stylists throughout this whole year to amplify their skills, not only to help them win this award but for their own social media [following], as well.”

User-generated content typically accounts for 50-60% of Olaplex’s Instagram posts, Schneider said. Olaplex has 2.1 million Instagram followers, and nearly 500,000 hairstylists in the U.S. use Olaplex. Winners will be featured in the publication Modern Salon and posted on Olaplex’s social media, plus they’ll receive an all-expenses-paid trip.

“This is a good opportunity to wake up our [professional] and [retail] consumers on our site, to show what’s possible with Olaplex. They’re coming out in the summer, fully vaccinated, ready to show off their hair and new look,” said Schneider.