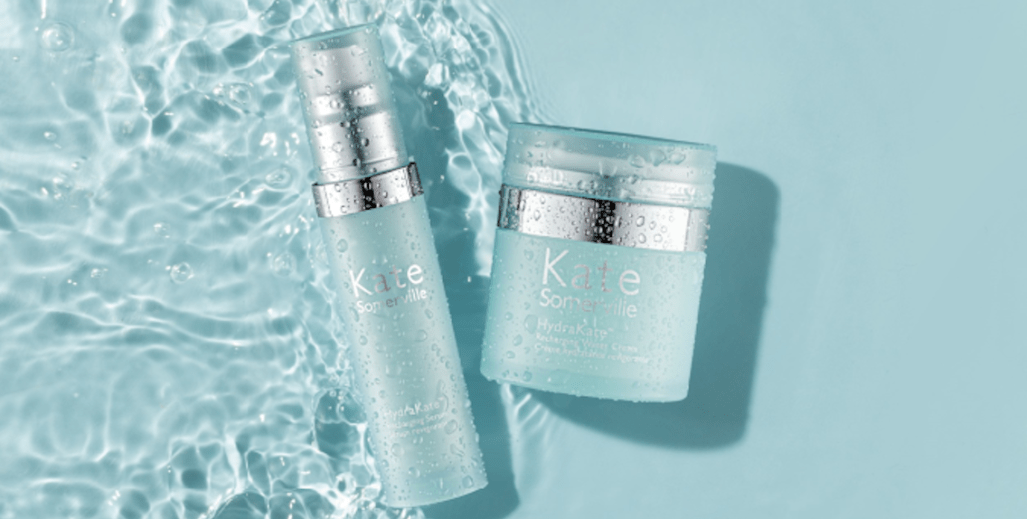 Kate Somerville: ‘A founder is given the burden and gift to get their vision out’

Beauty brand Kate Somerville has become a household name, thanks in part to its founder’s passion.

Kate Somerville, the brand’s eponymous founder, opened her first skin-care clinic in 2004 before launching her brand that same year. Somerville, who grew up on a farm in Fresno, Calif., said the brand was driven by her lifelong battle with eczema, partially due to the stress of a chaotic adolescence. Fast forward nearly 20 years, and the brand is available in Neiman Marcus, Sephora, QVC and Amazon following its 2015 acquisition by Unilever. Kate Somerville was one of the first brands in the conglomerate’s prestige beauty portfolio. Unilever does not break out individual brand sales, but its prestige category sales grew 14% during the second quarter.

Most recently, Kate Somerville introduced a new hydration skin-care line in September; it was partially inspired by her college-age son, Chae, and his dehydrated skin. The new line consists of two products at launch: a serum and a face cream selling for $78 and $76, respectively. The brand is bullish on its use of AquaPort technology. It claims it provides an 81% increase in skin hydration by stimulating aquaporin channels in the skin, allowing individual cells to better absorb hyaluronic acid. According to Somerville, this HydraKate Collection differs from another hyaluronic acid line by the brand called DermalQuench because of the AquaPort technology. HydraKate was designed for dehydrated skin, which Somerville said is surface dryness, compared to the chronically dry skin associated with eczema, psoriasis and other skin problems.

As sensitive skin becomes a greater talking point in beauty, Somerville spoke with Glossy about how the new line will be promoted, what it means for the rest of her company’s product portfolio and how she views her role as a figurehead.

As a very active founder, what do you consider the role of a brand founder to be?
“The founder is the heartbeat of a company. I have tons of friends who are founders that have sold their businesses to bigger entities and are no longer with the company. The founder is the messenger. Once you cut the messenger’s head off, and if the company doesn’t keep the same values [of the founder] and that pureness, [it won’t do well]. I know that sounds so corny, but I have watched businesses like Clarisonic when Dr. Robb Akridge left, and so many businesses I could name that just lost their way after the founder departed. The founder keeps the business true to what it is and how it started. A founder is given the burden and gift to get their vision out.”

What are the plans for marketing the new HydraKate launch?
“I’ve been a pioneer and finding new things early. The reason why is that a lot of new things hit the medical community first, and that’s where we sit. We have a clinic, so I found LED lights 10 years before they went mainstream. But it wasn’t until bigger companies caught on that it became popular. And sunscreen, for instance — Supergoop has this amazing jelly-like sunscreen, but we had [our own version] six years ago, and it didn’t take off. I’ve been talking with the team about how we can be first [to use Aquaport], but make it big. Being first is not always the best, because it takes time for people to catch on. That’s what my frustration has been. We’re talking about how to educate through videos and tutorials, get the word out with influencers, and get people to show how it works [with] their before-and-after photos. We’re trying to get more digital savvy; TikTok has been huge for cosmetics and skin care and [dermfluencers], so we’re focusing on that.”

How does the launch of HydraKate affect the standing of the DermalQuench line?
“We’re actually looking at reformulating our DermalQuench line with this AquaPort technology. DermalQuench is the smallest hyaluronic acid molecule available, but the new formula with Aquaport will boost hydration levels. We’re trying to figure out to launch the new DermalQuench; we will probably re-launch it in about a year.”