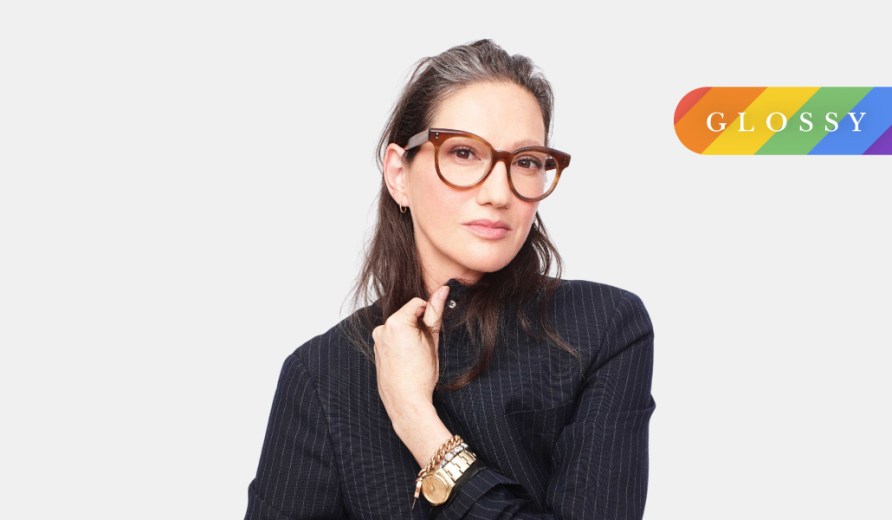 In 2011, when Jenna Lyons was creative director of J.Crew, she appeared in one of the retailer’s catalogs with her son, Beckett, a toddler at the time, his little toes painted hot pink. Right-wing outrage ensued. It was the same year an article in the New York Post outed Lyons as gay. In a conversation with Glossy, Lyons said that, while much progress in the realm of inclusivity and acceptance of the LGBTQ+ community has been made in the decade since, there’s still a long way to go. Of being suddenly and unexpectedly outed, she said, “It made me realize how important it is to just be who you are and be unapologetic about [who you are].” After all, “Who the hell cares who anyone has sex with? Like, it is none of your business. It does not matter.”

In September of 2020, Lyons launched Loveseen, a fake eyelashes brand, with makeup artist and former J.Crew collaborator Troi Ollivierre. “If you were to launch a beauty brand five years ago, no one would have even considered putting a boy in an ad,” she said. Things have certainly changed since the nail polish debacle. Lil Yachty just launched a collection of gender-neutral nail polish, and some of today’s top beauty influencers are males. “I love that and it makes me happy for a kid who lives in Alabama, who maybe doesn’t feel comfortable going to the makeup counter,” Lyons said. “But can see James Charles raking it in, and you can do that from your living room.”

As far as activations around Pride Month go, there are the brands that “have always tried to show up and be bold and brazen.” Lyons cited MAC as an example. But the slap-a-rainbow-on-it approach doesn’t sit with her. While brands giving money to non-profits is undoubtedly a good thing, particularly after a year like 2020, “the best possible way to support people is to actually hire them, nurture them, give them a welcoming community and pay them well,” Lyons said. Loveseen is one company where it is more unusual to be straight than to be a member of the LGBTQ+ community, she said.

“Every month, there is something that is highlighted [on social media]. And it does help shift your focus,” Lyons said. “I am a gay white lady, so my general attention and what’s on my radar [includes] stuff that relates to me, because that’s who I am. That’s the way the world works.” For example, Asian American and Pacific Islander Heritage Month, in May, helped Lyons to shift her focus to the discrimination faced by that community. And when brands acknowledge these inequalities, “there’s merit and validity and good in that.” The problem, she said, arises when the month is over and the “person who walks into the room, who maybe is gay or Asian or Black, doesn’t feel that they still have a seat at the table. They’re not hired, they’re not paid — and that’s when it goes awry.”