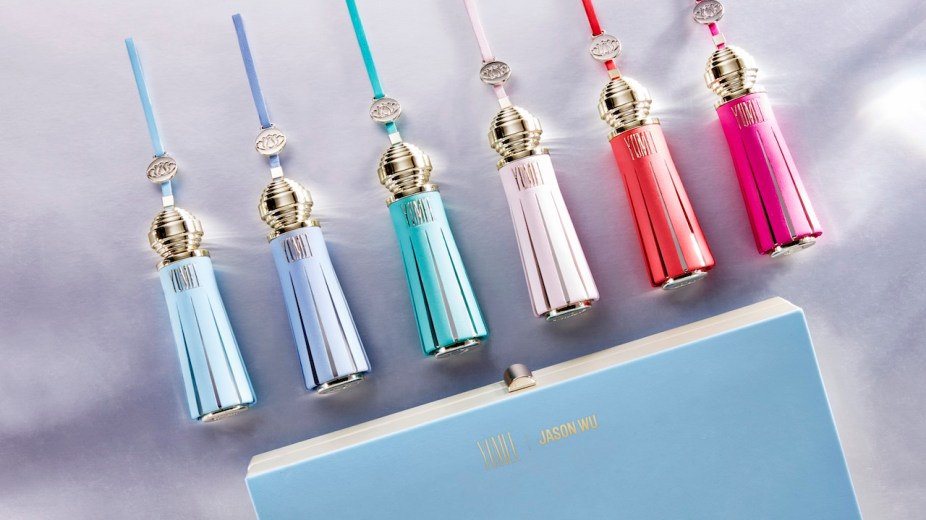 If it had not been for the pandemic, entrepreneur and philanthropist Wendy Yu would have worn a custom Jason Wu gown to the Met Gala in May 2020. One year later, there’s still no Met Gala, but Wu and Yu have made the most of it with a new beauty collaboration.

For China’s 5.20 shopping festival, fashion label Jason Wu created a special-edition clutch with Yu’s China-based luxury beauty brand Yumee, featuring six of Yumee’s luxury lipsticks. Priced at $305 or RMB1,968, the set includes one lipstick shade called “Met Gala” intended for a formal occasion or night out and will be promoted across both Chinese and international social channels. Launched in February, Yumee joins China’s growing number of digitally native C-beauty startups that have emerged and found success on e-commerce platforms.

The limited-edition set will be sold exclusively through Tmall, following the brand’s Tmall shop opening on May 7. The brand is exclusively online for now, and is also sold and promoted on Red and WeChat. Yu said that she consulted closely with Red for data on what was popular in beauty for Gen-Z and millennial consumers.

“There is definitely a gap in the Chinese goods market for the luxury C-beauty brands, and that’s why I decided to create it,” said Yu, of her brand. “I felt that the brands I repeatedly used were the Japanese, European and American brands. There weren’t any Chinese beauty brands at the time that I personally loved using or that my friends used.”

Jason Wu’s aesthetic is “the perfect example of East-meets-West that resonates with me and Yumee,” said Yu of the collaboration. Her brand’s colors are inspired by Chinese porcelain and silk embroidery.

“For both of us, it was important that our Chinese heritage is reflected within the collaboration,” said Wu. The two had previously embraced this concept for what would have been Yu’s Met Gala gown, which was going to feature a Chinese-inspired embroidered print. “We kept the graphics and the concept for the entire project intact,” said Wu, adding that he hopes it can be used in the future.

This “East-meets-West” aesthetic reflects Yu’s own cosmopolitan background. The daughter of billionaire Jingyuan Yu, the founder of the Mengtian Group, Yu is widely known in the fashion world for her philanthropy and investments. In 2017, she endowed the head curator position of The Met’s Costume Institute; the Wendy Yu Curator in Charge position is currently held by Andrew Bolton.

Yumee currently offers lipstick, highlighter, blush and eyeshadow, with lipsticks selling for RMB328, or around $51. The brand is “crafted in China in collaboration with top Japanese manufacturer Toshiki,” according to its description.

Already one of the most important luxury markets in the world pre-pandemic, China has become the industry’s center of gravity as one of the only places where brands could hold large in-person runway shows or events in the past year. Wu has become increasingly active in China, collaborating on China-specific Fila collections over the past four years, and taking part in a recent collaboration with Chinese children’s brand Balabala. By early next year, he plans to launch in China his beauty line that debuted this year at Target. He also opened his second Shanghai flagship store last Friday, with plans for a Tmall launch “within the year.”

China is “undoubtedly one of the most important capitals in fashion, and it’s only going to be more important — not only from the consumer point of view, but also from the creation point of view,” said Wu, who has been friends with Yu since meeting her five years ago at Caviar Kaspia in Paris.

“Life is much more normal there,” said Wu, of China’s post-pandemic revival. “The idea of glamour is something that is going to come back in a really big way.”

For the mostly IRL Shanghai Fashion Week in April, Yu held a formal event celebrating her Yu Prize for emerging Chinese fashion designers, with judges including Wu and The Met’s Andrew Bolton, among other prominent fashion designers.

“Because the pandemic in China is very well under control right now, the consumers and the brands can still operate normally,” said Yu. “The Chinese market has become even more important for luxury brands.” China’s domestic luxury market was estimated to grow by 48% in 2020, according to Bain & Company, and is predicted to take the highest share of the global luxury industry by 2025.

In addition to the fashion prize, Yu’s company Yu Holdings is an active investor in the fashion world. The company has invested in Mary Katrantzou and helped launch the brand in the China market, as well as fashion search engine ASAP54, which was acquired in 2017 by Farfetch. Yu said the experience of running her own beauty brand is starkly different from investing.

“When you invest, it’s like you are the fairy godmother, and you don’t need to get involved with the day-to-day operations. [But] Yumee is really like my daughter,” she said.

Yu is in talks with international luxury retailers and plans to launch her beauty brand globally in the fourth quarter of this year. She is looking at the U.K., France and the U.S. as her next markets.

“The ultimate mission and vision for Yu Holdings is really to be the cultivator and incubator of creativity and beauty, especially between the East and the West, and on the global scale,” she said. “In the past, we have been focused on our investments. While the doors are still open, because Yumee and the Yu Prize are really my babies, we will be quite focused on this brand and this platform.”