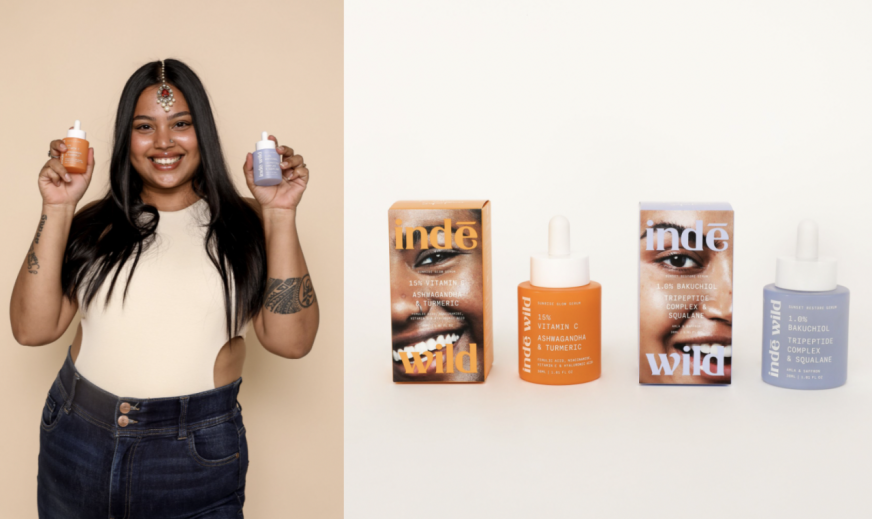 Diipa Büller-Khosla doesn’t call herself an influencer. On, Instagram, her title is “entrepreneur,” and in her bio, she describes herself as a “Global Indian.” And she has 1.5 million followers, who have followed her skin journey as she’s worked to clear her acne. Her mother, Dr. Sanghita Khosla, is an Ayurvedic doctor and dermatologist. This combination of factors made her feel that creating her own brand was not a matter of if, but when. The when, it turns out, is now, after a 2-year product development and brand building process.

Before the journey to create Indē Wild ever began, Khosla struggled with acne for 10 years, she told Glossy. She understood, from her mother’s Ayurvedic teachings, that to heal it was a process that began internally. “I was getting so many messages from people who were like, ‘How do you have such perfect skin?’ And actually, I had really bad skin.” She decided to be transparent with her followers. “I was just like, I’m gonna just do it. I’m gonna get out there and post photos of myself with my real skin.” The response was unprecedented — it crashed her blog. Khosla believes it was impactful because she started posting more transparently in 2017, when “everyone would post perfect versions of themselves on Instagram and everything was photoshopped,” she said

“Then two years ago, I received an email from an incubator that was like, ‘Hey, Diipa Khosla, you’re doing so great. Why don’t we start a brand with you?’ I thought, ‘Aha, that’s it,'” she said, though the incubator declined to be named. The incubator’s original plan was to have a brand launched and ready to go in just six months. But ultimately, Büller-Khosla didn’t feel comfortable moving that fast, so they slowed down. “As an influencer, having worked with so many beauty brands, there was a space in the market for something new and something that was really built with heart and soul and knowledge and experts. And so I went back to the drawing board and started from scratch,” she said. “It wound up taking two years and about 43 versions of the AM serum and 21 versions of the PM serum, going back and forth.”

The brand will launch direct-to-consumer on October 12 with two serums, each $37. The brand uses its own word, ‘Ayurvedistry’ — a blend of Ayurveda and chemistry — to describe its approach to its products.

“For the longest time, I saw a lot of global brands that celebrated the Japanese culture or the Korean culture or now even the African culture. I wanted a brand that was that global brand that celebrated the South Asian culture, especially because I come from India. We have Ayurveda that is the world’s oldest natural science. It’s been there, we have it, why not share it with the world, as well?” she said.

The Sunrise Glow Serum, or AM serum, contains Ayurvedic ingredients like ashwagandha and turmeric, both of which have become increasingly popular in topical skin care in recent years. “Turmeric is antiviral, antimicrobial — it’s like an antibiotic on your skin,” said Nidhi Pandya, a third-generation Ayurvedic practitioner, who is on Indē Wild’s all-female board of advisers. It also uses “traditional” skin-care ingredients like ferulic acid, niacinamide and hyaluronic acid.

During the formulation process, Khosla became pregnant and changed her plans for her second product, which is the Sunset Restore Serum, or PM serum. It was originally intended to contain retinol, which is not pregnancy-safe. Her perspective changed, Khosla said, noting that she wanted to create a “brand that everyone can use, especially the first two products.” She decided to instead use bakuchiol, now a very commonly used botanical ingredient often positioned as a “retinol alternative,” which has history in Ayurveda. The ingredient is paired with amla — a rejuvenating herb, Pandya said — and saffron. According to Pandya, saffron “goes deeper into the skin to break up debris.”

On September 19, the brand posted its teaser video to Instagram, which gave Khosla’s fans a first look at the brand’s mission.

Her intention for Indē Wild is to provide a counter to the colorism and rampant messaging promoting skin whitening that many South Asian women grew up with. Her inspiration, which she shared with the team behind the video, was for Indē Wild to be like the “Nike of beauty,” in the way it resonates. “I want every video we launch to give people goosebumps. It’s a celebration of womanhood and of beauty that I really wanted to instill into the brand, on top of that highly educational angle of, ‘Know what you’re putting in your body. We’re going to teach you.’ It will make you feel extremely empowered.”