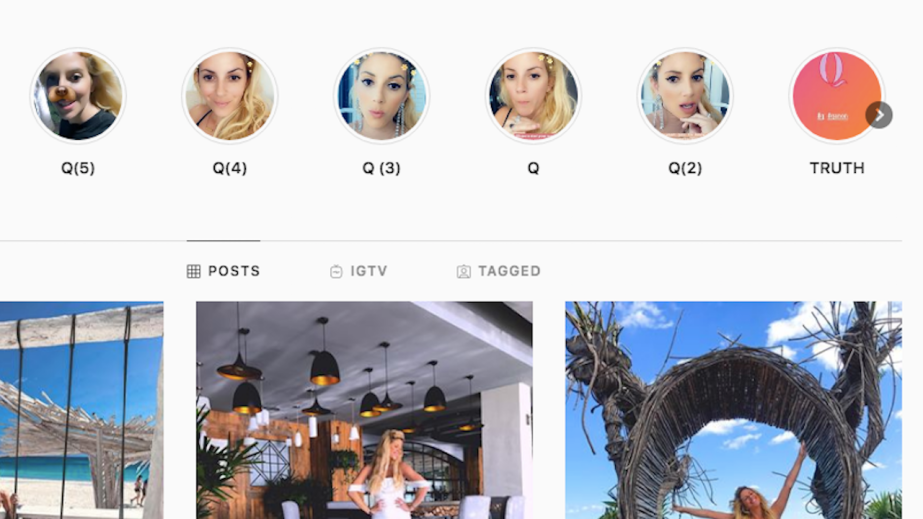 ‘I love you my beautiful #QAnon!’: When lifestyle influencers also peddle conspiracy theories

“I’m an ambassador for Revolve, and I get a lot of amazing free clothes constantly,” said the travel, wellness and lifestyle influencer in her Instagram Stories on June 4. In the same Story, she showed off a frilly baby blue dress with a Revolve link to purchase.

But although her main feed is made up of photos like her modeling a yellow sundress on a beach in Tulum or posing in a gold jacket on a ski lift in Tahoe, Cohen’s saved Stories are full of QAnon conspiracy theories: George Floyd may still be alive, Britney Spears tried to escape from the deep state cabal and was subjected to mind control experiments, and an artisanal doughnut shop in Portland is part of a human trafficking ring.

This is just one example of a subset of lifestyle influencers who have posted conspiracy theories about everything from QAnon to the “Plandemic.” They’re also still posting about some of the world’s largest brands and retailers like Nike and Nordstrom. With brands pouring more money into influencer marketing, they run the risk of associating unwittingly with those pushing conspiracy theories. This is thanks to affiliate and influencer networks, which enable brands to work with thousands of mid-tier influencers, but these same networks also run the risk of associating brands with outré content.

“It’s almost been two weeks, I believe. Yeah. And people are still fucking doing shit in the streets. Are you kidding me?” she asked her 105,000 followers on June 7, while using a filter that added a whimsical yellow flower crown animation to her head. “This is why America needs to open, so that people can go back to their jobs, and not be so fucking bored.” She also added her thoughts about the killing of George Floyd, saying, “This is not Martin Luther King, OK? This is the complete opposite. I don’t want to be a bitch.”

In addition, she shared a theory that has been spread by QAnon accounts in recent weeks, saying, “I really want to hope and believe that he’s not dead.”

Revolve, which recently launched a foundation with a $1 million dollar pledge to fight racial inequality, declined to comment on whether or not Cohen is still an ambassador for the brand. The company recently stated on its Instagram, “We are committed to ensuring that our influencers, models and designers are more inclusive of the Black community and will begin taking actions now.”

The wave of influencers that have begun to endorse QAanon conspiracy theories has been covered by Insider, The Huffington Post and Mother Jones in recent months.

“A lot of these lifestyle influencers have made a fairly good living and [have a good] lifestyle, [but] they’ve probably been the most battered and suffered the most, from a financial perspective, since Covid-19,” said Mary Keane-Dawson, CEO of influencer agency Takumi. “There have been quite a few examples of people passing themselves off as talent management agents, who are [misadvising] these influencers to try and ride a wave of populism so that they can get more followers. They think they can monetize by promoting conspiracy theories and snake oil cures for the virus.”

Cohen’s feed also has a post saying hydroxychloroquine, which President Donald Trump said he has taken, is a “proven cure” for Covid-19.

While some “have largely abandoned their relationships with brands to promote conspiracy theories full-time, many of these influencers have continued to create content for brands,” said Conor Begley, co-founder and president of Tribe Dynamics.

One way of doing so is through link affiliate programs with thousands of influencers representing a brand at a time. Revolve, for example, works with an estimated 3,500 influencers in various capacities, including an ambassador program that influencers can apply to.

Another influencer promoting both QAnon content and shopping links is Rebecca Pfeiffer (@luvbec), who has a section called “Q” on her saved Instagram Stories. There, she has shared posts calling Covid-19 a “scamdemic,” saying that the “race war” is being used to “distract and divide us,” and promoting a video called “Fall of Cabal” that promotes the Pizzagate theory that resulted in a 2016 shooting in a pizza shop in Washington, D.C.

All the while, she has been promoting brands through affiliate link platform Like To Know It, which has a network of over 50,000 influencers. Recent promotions include a link to purchase a Cult Gaia bag on Shopbop, a pair of leggings from Lululemon, a straw hat on Nordstrom, Nike sneakers, and a dress and tank top from Aerie. Like To Know It did not respond to a request for comment, nor did Pfeiffer.

“As more and more brands are looking for means of cutting out the retailers and driving traffic and sales, particularly in the beauty market, I think you will see more and more affiliate links and affiliate-driven campaigns,” said Keane-Dawson. “It will only work if the agencies and the brands behave in a professional way, and don’t let it turn into the Wild West, which is what we’ve seen.”

Some influencers have kept small amounts of conspiracy theory content limited to their 24-hour Instagram Stories and have not lost direct brand partnerships. Carmella Rose, who has 2.3 million followers, was revealed by a New York Times reporter to have posted about “Obamagate” and “Plandemic” conspiracy theories in May, as well as anti-vaccination content. She has since done promotions for Ipsy and Alo Yoga, and did a fitness livestream on Alo Yoga’s Instagram account as recently as May 26. According to Tribe Dynamics, Rose is among Alo Yoga’s top influencers, driving over $739,000 in earned media value for the brand between January and April. Neither Ipsy nor Alo Yoga responded to a request for comment.

Platforms including Facebook, Reddit and YouTube have been removing conspiracy theory content, including QAnon groups and the Plandemic video. QAnon was named in an FBI memo as one of the conspiracy theories that are “driving both groups and individual extremists to carry out criminal or violent acts,” following the Pizzagate shooting.

Brands should be more aware of what their influencers are posting on Instagram, said James Nord, the founder of Fohr.

“These people are going to be spokespeople and you really need to understand them, and vice versa,” said Nord. “Not only is the brand associating with that person, but they’re allowing them to be a megaphone for their brand. That opens brands up to a lot of risk.”

“Anyone peddling conspiracy theories is someone we would not suggest to a brand,” said Nord, who noted that Fohr contracts include “morality clauses” that allow brands or influencers to end contracts if they disagree with statements by the other party.

Some influencers have fewer brand promotions these days. Ivy Carnegie, a parenting and wellness influencer who has over 95,000 followers, follows a QAnon account called “Q the Wake-Up,” and she posted a video in early April containing false information about the coronavirus from QAnon-affiliated conspiracy theorist John Mappin. On June 3, she shared a post about a purported “riot manual” for the George Floyd protests, writing, “We are all being played.” The photo is reported by Snopes to be a “recirculated hoax” from 2015. Carnegie did not respond to a request for comment. Since then, Carnegie’s only sponsored post on her main feed has been for a meal delivery company.

These influencers have been active members of the clean and natural beauty and wellness world. Carnegie has previously posted about Honest Beauty, and is followed by beauty and wellness brands ReFa, Urban Skin RX, Trestique, Ole Henrickson, Seed Phytonutrients, Premama Wellness Vitamins and Beekeeper’s Naturals, among others. Carmella Rose is followed by brands including Kora Organics, Revolve, FaceGym, Biologique Recherche and Dr. Barbara Sturm, as well as other influencers and celebrities.

Some of these influencers appear to have switched the types of brands they promote as their content has changed. A wellness influencer who is known only by “Heather R.” under the handle @heather.rest’s feed was previously known for Hawaii beach photos with plenty of palm trees, tropical flowers and avocados. She was followed as of last Friday by clean beauty brands including Innersense, Follain, Indie Lee, Beekeeper’s Naturals and Antonym Cosmetics, and has posted about Honest Beauty, Summer Fridays, Natura, CocoFloss and supplement brand Further Food. Honest Beauty stated that it was not a sponsored post.

Since early this year, her feed has featured posts about topics including the “race war agenda,” “Soros agenda,” and “planned, paid, false flag,” with regard to the George Floyd protests — set against backgrounds of palm trees to keep with the Instagram aesthetic. Her saved Story themes include chemtrails and a category called “Q,” which includes theories such as one saying that Hillary Clinton cut off a child’s face during a Satanic sacrifice. As her posts have become more political, her feed has stopped featuring posts about beauty brands. It does, however, feature a sponsored post for a gun box company called Stopbox USA. When asked for comment, she threatened legal action for defamation.

While originally focused on brand promotions, these influencers are also branching out into new forms of monetization. Kim Cohen, for example, created a QAnon merch shop with shirts and coffee mugs. She also launched a QAnon Patreon with a subscription fee, saying in the description, “I love you my beautiful #QAnon!”