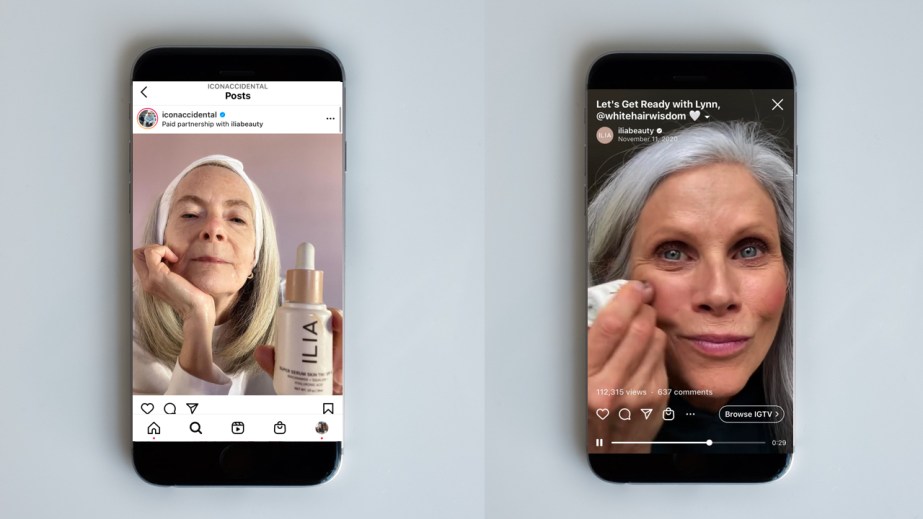 How influencers 50-plus are changing perceptions around age in beauty

Instagram influencer Lyn Slater has worked with some of the world’s top luxury brands, including Hermès Beauty, La Prairie and Dior Parfums. But in order to agree to an influencer trip or sponsored post with a brand, she has one rule: They can’t use the term “anti-aging.”

“I probably could have worked with hundreds more beauty companies, but if they have the word ‘anti-aging’ in their marketing in any way, I say, ‘No, I won’t work with you,’” said Slater. Primarily a fashion influencer, she has built an audience of over 748,000 Instagram followers over the last six years. Slater is just one tastemaker showing the power of influencer marketing for all ages.

Although baby boomers are 12 times wealthier than millennials and account for an estimated 56% of all U.S. spending, they are often overlooked by consumer brands. They are the target of less than 10% of total marketing, according to a study by the National Venture Capital Association, Ernst & Young and AARP. Influencer marketing has remained more focused on younger digitally native generations, even as baby boomer e-commerce and social media use has climbed during the pandemic. According to a July 2020 survey of influencers tracked by influencer marketing firm Tribe Dynamics, 53% of influencers are between the ages of 25 of 34, and 15% are under 25.

“People still seem to think it’s just amazing that an older person on Instagram can have more than a few thousand followers and make money,” said Slater. “All of these images of aging that people have in their head are really obsolete.”

Slater has become especially focused on beauty content partnerships during the pandemic. Most recently, she collaborated with clean color brand Ilia, which has become known for working with influencers of all ages.

“Two years ago, we had to do an exercise where we were asked, ‘Who is our target customer?’ I remember some larger retailers putting such a focus around Gen Z,” said Sasha Plavsic, founder and chief creative officer of Ilia. “When somebody says, ‘You have to do this,’ I generally like to go in the other direction, so I looked above [that age range].”

Notoriously youth-obsessed, the beauty industry is undergoing a shift in its approach as more brands scrap the term “anti-aging” in their marketing. A wave of new beauty startups for menopausal women have also popped up, such as LaMaria, Caire, Better Not Younger, P&G’s Kindra and Arfa’s State Of. Many of these brands have adopted “anti-anti-aging” messaging.

“Even when you think of the term ‘influencer,’ most people automatically think of someone maybe in their 20s or 30s,” said Rahel Marsie-Hazen, an influencer marketing expert and head of PR and content at digital photo frame company Aura. “But as influencer marketing continues to grow, we’ve definitely seen more baby boomers and older Gen Xers hop on that bandwagon.” She noted that “brands are getting more hip to this,” and the “demand for older influencers is on the rise,” driven by baby boomers’ disposable income in the U.S.

When it comes to brands’ influencer content, consumers have been excited to see representation in their age group: One Facebook post by Ilia featuring Lynnie V (@whitehairwisdom) received over 89,000 likes and 12,000 comments. (The brand’s most recent Facebook posts have less than 150 likes each.) A commenter named Barbi Gyda, who had the most-liked comment, stated, “I’m so glad to finally see an older model.” Another comment read, “Now THAT is how you sell makeup. Bravo for not using a 20-year-old model.” The brand has also worked with prominent over-50 influencers such as Grece Ghanem (@greceghanem, 548,000 followers) and has shown multi-generational group shoots with millennial influencers and their moms.

Ilia is rare among Instagram-focused indie beauty startups, which tend to zero in on millennials.

“The heritage brands, in particular, have always had a very healthy respect for older women and have featured them,” said Slater. “Some of the younger brands are still focused on a younger demographic.”

Influencers reach audiences far outside their own age range, however. Slater said her audience is primarily millennial.

Other influencers have built massive audiences creating content specifically for the underrepresented over-50 demographic. Fifty-eight-year-old Angie Schmitt, who talks to her 850,000 subscribers on YouTube via her Hot and Flashy channel, serves as a brand ambassador for Curology. According to Tribe Dynamics, she drove the most EMV for the brand of any influencer in 2020, earning $1.9 million of the brand’s $10.4 million EMV that year.

While the over-50 demographic is most associated with Facebook, they’re also using YouTube. In the three years since she launched her YouTube channel, Fabulous over 50, Schellea Fowler, an Australia-based YouTuber, has amassed over 1 million followers that are predominantly between the ages of 45 and 65. Fowler’s channel features beauty, fashion and wellness content. Her organic beauty content has recently included a six-month organic trial of The Ordinary, and makeup tutorials with brands including MAC, Nars and Charlotte Tilbury. She has not yet jumped into sponsored content, but said beauty brand inquiries have been increasing.

Some brands are seeing high EMV on posts by over-50 influencers when they receive organic mentions. While CeraVe has been in the news for its partnership with Gen-Z influencer Skincare by Hyram, Tribe Dynamics found that Hot and Flashy was among its top 10 EMV-driving influencers for 2020 thanks to Schmitt’s organic recommendations.

“When we work with brands, we encourage them to take a little bit of a step back from traditional targeting in the influencer space and think about who’s already creating content about the brand. Maybe they’re not the person they would have expected, but if these influencers are out there and they’re creating organic content and and their audiences are engaging with that content, it’s a very ripe opportunity,” said Brit McCorquodale, svp of revenue at Tribe Dynamics.

But the influencers noted that there’s still a long way to go in industry perceptions of aging.

“Ageism is the one area that has not been really addressed or dealt with, not just in fashion and beauty, but in society in general,” said Slater. “What’s really interesting about ageism is that it’s a prejudice against everybody’s future self. You’re all going to get there; you’re all going to have wrinkles. It’s inevitable.”