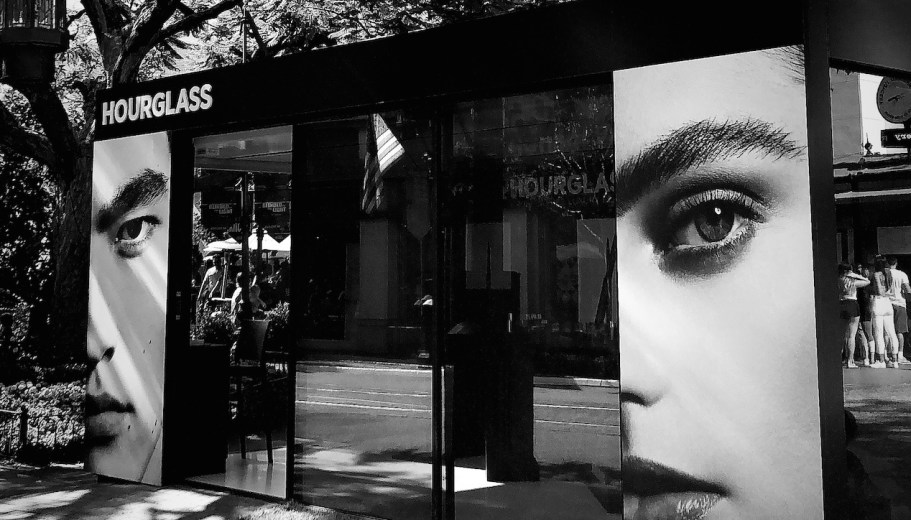 Retail pop-ups are all the rage, but in 2019, there are still some brands like Hourglass Cosmetics that are only now dipping a toe into the space.

From July 4 through July 28, the Unilever-owned prestige cosmetics brand is holding its first pop-up at The Grove in Los Angeles for its new Unrestricted Brow product. The product launched earlier in the month and is meant to enhance a user’s natural brow versus promoting the highly manicured look that is frequently found on Instagram. Because Hourglass has been busy expanding globally, as evidenced by its UAE touchdown in March, the primary motivation for the pop-up was to reconnect with new and existing customers on the ground. Hourglass declined to provide financials, but it was called out in Unilever’s first-quarter earnings in April for “continued strong growth” in prestige beauty.

The pop-up features all of Hourglass’ 25 brow products, and select hero products like foundation and blush will also be available for sale. Visitors to the pop-up can receive makeovers and take advantage of Instagrammable opportunities, such as a photo-video booth that inserts a shopper into Hourglass’ current digital brow campaign. There are also celebrity ambassadors that will make meet-and-greet appearances, including model and entrepreneur Rosie Huntington-Whiteley on July 14.

The brand is measuring its success based off of how many people it is able to connect with through email capture, social media engagement and visitors, which is why it opted to host the pop-up at The Grove instead of its flagship location in Venice Beach, said Heather Duchowny, Hourglass vp of consumer engagement. The Grove reportedly sees over 20 million visitors a year, according to Forbes. It is also the No. 1 requested Uber drop-off spot in California, per USA Today.

“Of course, we look at sales at the pop-up [to measure our return on investment], but it’s more about speaking with customers to not only explain our eyebrow point of view but also what Hourglass stands for, which is cruelty-free and vegan beauty,” said Duchowny.

In 2018, the top-three best-selling brow products belonged to Revlon, L’Oréal Paris and Maybelline, whereas newer brands like Hourglass, Benefit Cosmetics and Anastasia Beverly Hills did not even rank in the top 10, according to Statista.

The focus on community building has become more popular within beauty as brands like Murad and The Nue Co. are increasingly hosting experiential and event-based pop-ups versus pure product shopping blitzes. Hourglass’ focus on cruelty-free beauty and its efforts to produce makeup for more natural looks relates to consumer values about both animal rights and effortless makeup. Hourglass plans on communicating this with in-store signage and its own makeup artists within the pop-up.

This corresponds to a growing trend around retail success being measured beyond sales-per-square-foot to include social media impressions, earned media value and physical impressions, said Ana Pelucarte, co-founder of pop-up consultancy Pop Up Mob. “[Brands] have realized that they don’t know if someone steps [off their computer] and engages with a brand after viewing a digital campaign,” she said. “[Pop-ups] allow customers to build their own opinion about you through experiences. More than being Instagrammable, they care about building a community.”

That also means it has become more expensive over time, with beauty pop-ups now costing upwards of $200,000, said Pelucarte. (Other industries are at least $50,000 less, she said.) Hourglass declined to say how much its pop-up cost.

Although the brand does not plan on hosting other pop-ups in the near future, it’s not ruling them out. There are other activations around its cruelty-free campaign, “Eye to Eye,” coming to life in the fourth quarter that are meant to strengthen its beauty community, said Duchowny.

In the meantime, Hourglass is hosting a digital contest encouraging pop-up visitors to geotag their photos and videos with hashtag #Unrestrictedbrows and #Hourglassbrows before July 22 for a chance to win a makeup application session with the brand’s global makeup artist and a $500 gift card to the Venice Beach storefront. Beyond that, Hourglass is leveraging its celebrity partners and influencers like Raye Boyce (@itsmyrayeraye; 1.6 million Instagram followers), who attended a launch event on July 10.