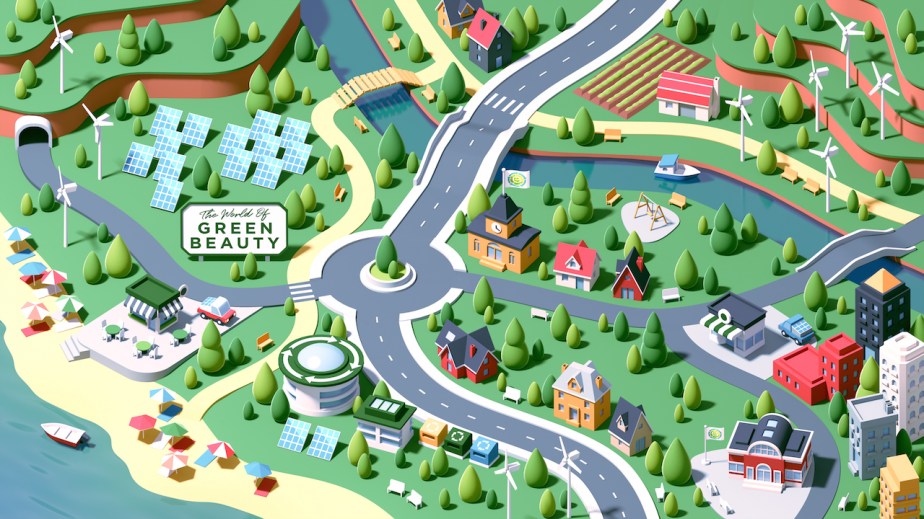 In a world of constant Zoom meetings and inevitable Zoom fatigue, L’Oreal-owned Garnier has looked to an interactive and self-guided digital experience to announce its latest sustainability news.

On Thursday, the brand shared a self-guided virtual press event called World of Garnier Green Beauty, meant to better convey the brand’s multiple sustainability initiatives and goals, all at once. These include: sourcing ingredients that respect and improve biodiversity in their ecosystem, creating a circular system for plastic packaging that will afford Garnier zero usage of virgin plastic by 2025, and becoming carbon neutral by 2025, among many other efforts. Though people have had to operate in the new normal predominately through Zoom, the platform’s commonality has also yielded fatigue and boredom. Multiple brands are trying to combat this through more exciting video events, and some are even testing in-person events again. Though the event itself was geared for the press, Garnier does plan to share its sustainable plans with customers.

Garnier’s first prompted attendees to pick up five plastic items around them, before displaying an animated map where people could click on seven places like a “Town Hall” or a “Café Garnier.” Each of the seven places hosted Garnier speakers, who discussed various initiatives the brand is working on, such as improving sustainable packaging and formulations, and working with non-profit organizations.

Adrien Koskas, Garnier global brand president, declined to share any Garnier sales information, but the brand was called out by Jean-Paul Agon, L’Oréal Group CEO, on the company’s second-quarter earnings call for contributing to a gain in market share, which was driven by hair care. Garnier, which is distributed in 64 countries, is under the consumer products division of L’Oreal Group, which saw sales declined 10.4% for the first half of 2020 compared to 2019. Despite any sales decline, the mass-market brand is poised to play a significant role in L’Oréal Group’s overall 10-year sustainability plans.

“Garnier is the most price-accessible brand in the L’Oréal Group, and because of that, bringing sustainability as a core value is so precious and makes a difference,” said Koskas.

Moving forward, Koskas said that in addition to sharing sustainability initiatives on traditional communications channels, such as social media, Garnier plans to launch a website focused on sustainable information. It will help customers understand their own impact on sustainability and will feature tips like what can be recycled.

Past consumer-facing initiatives by Garnier have included featuring the origins of ingredients on product labeling, which it’s done since 2017. In June, Garnier launched a consumer-facing tool in France aimed at helping customers make more sustainable choices. The tool, called Product Environmental and Social Impact Labeling, grades labels based on their sustainability across Garnier’s hair-care lines; the plan is to roll it out to more L’Oréal products and categories worldwide, said Koskas. It has yet to debut in the U.S. He said that Garnier and L’Oréal Group want to own the sustainability conversation with its customers and play a role in marketing holidays that focus on sustainability, such as National Water Week (Oct. 21-27) or World Soil Day (Dec. 5).

“If we want to be serious about sustainability, it needs to be a holistic approach that tackles every point in the chain of action,” said Koskas. “When you talk about sustainability, you want a bit of content and education. This is where digital can be super helpful, because it can tell the full story; two lines on the packaging or in a TV ad is harder.”