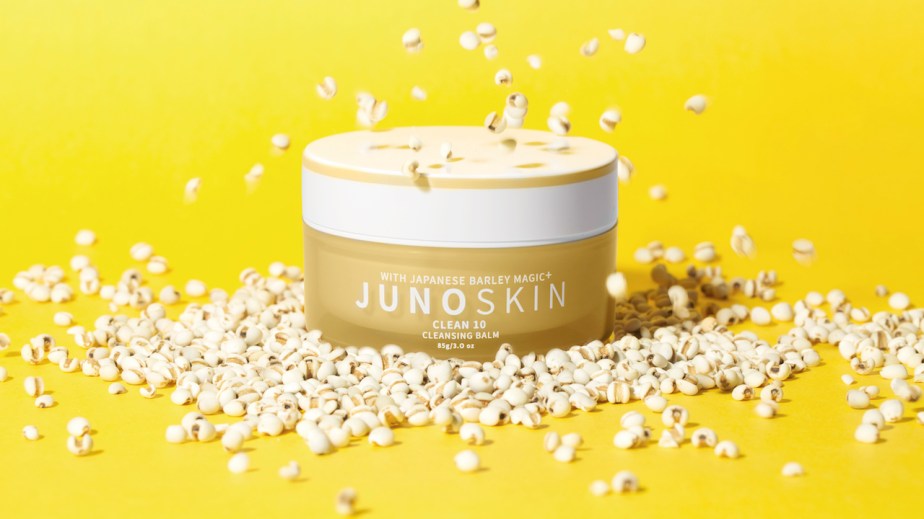 For Gen-Z startup Juno & Co., SpongeBob and TikTok have paved the way for its expansion into skin care.

Juno & Co. is launching a new skin-care brand called JunoSkin via DTC on October 8; products include a cleansing balm, a mask and a cleansing mask featuring natural ingredients like kale, cannabis sativa and Japanese barley. Juno & Co. has seen 300% year-over-year growth this year, driven in large part through TikTok marketing as well as a wildly popular makeup sponge collaboration with SpongeBob in August. With a ban on TikTok looming as the platform’s deal with Oracle is still in the works, Juno & Co.’s growth shows how important TikTok has become for brands reaching a Gen-Z demographic.

The brand was inspired to start a skin-care line by the success of its Moonshine Miracle Cream, which sold 200,000 units since its launch in September 2019.

“In January this year, we sent out a survey asking our customers what they wanted us to launch next,” said Kyle Jiang, the co-founder of Juno & Co. “Sixty percent of them wanted us to launch a clean skin-care line that was accessible.” The price point will be under $20 for each jar. The brand joins other color cosmetics labels making the leap into skin-care recently, including Fenty Beauty and Kylie Cosmetics. Skin-care expansions have been especially helpful to brands during the pandemic, as the category has taken less of a hit than color cosmetics since the shutdowns began.

“Last year, we were trying to forecast what was going to happen next in terms of beauty and we know that a lot of people have been using makeup forever now,” said Juno & Co. co-founder Mira Torres, an Ipsy alum. “We realized that what’s coming next is basically people undoing all the damage that they’ve been doing to their skin [though makeup], and they’re going to be taking better care of their skin.”

Sold at Gen Z-friendly locales including Target, Urban Outfitters, Beautylish and Amazon, the brand became especially popular from the rise of its SpongeBob Squarepants makeup sponge collaboration on August 10 that went viral on TikTok. The hashtag #JunoXSpongeBob received 2 million views, and received a boost from popular TikTokers including cosplay influencers Taya Miller and Annie Thomas, and beauty influencer Natasha Caudill. The sponges sold out instantly at launch and garnered a waitlist of 65,000 people.

SpongeBob’s popularity on TikTok was also a main driver. When the makeup sponge campaign began, the #SpongeBob hashtag had around 3 billion views — it is now up to 4.7 billion. SpongeBob has also been the source for many viral sounds on TikTok. The anthropomorphic cartoon sponge has been a successful collaboration partner for beauty brands, with HipDot also launching a SpongeBob collection in the past.

While Juno & Co. is targeted at the 18-24 age demographic, JunoSkin is geared toward a group “younger than our core demographic,” said Jiang, who noted that the growth driven by TikTok means the brand will target 15- to 20-year-olds. Jiang said that 15% of Juno & Co.’s site sales are driven by TikTok and predicted that 40% of JunoSkin sales will be driven by the platform if it’s not banned in the U.S.

“This year, our entire marketing team is focusing on TikTok,” said Jiang, emphasizing the importance of TikTok for Gen-Z customer acquisition. “We want to focus JunoSkin to be kind of a ‘TikTok brand,’” he said, noting that the brand’s marketing will center around creating content and working with TikTok influencers.

The continued uncertainty of TikTok’s fate, however, will mean the brand would need to shift course in the case of a ban. “Juno is always looking for alternative platforms to reach Gen Z, like Instagram Reels,” said Jiang, who noted that the brand is “taking the TikTok news as it comes.” Juno’s next most important platform aside from TikTok is Instagram.

Torres and Jiang noted that for current and future product launches, the brand is especially reliant on customer feedback.

“We have a library of over 100,000 people that we try to talk to as often as possible through surveys and direct messaging,” said Torres.