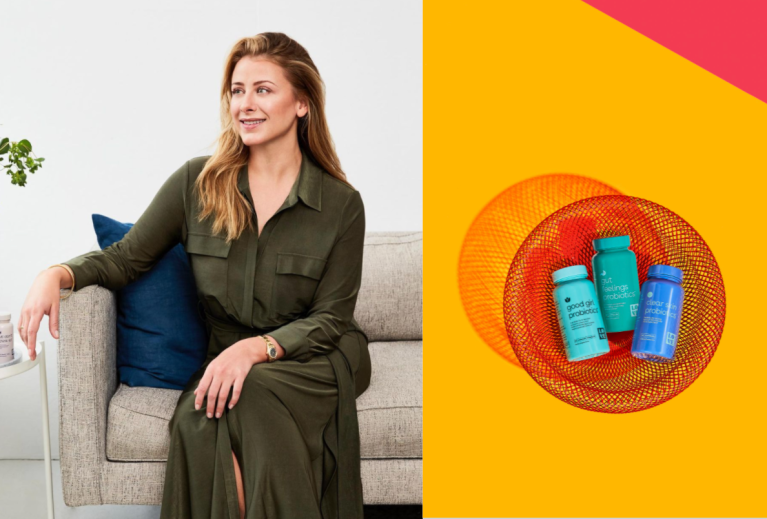 Lo Bosworth, the former reality star, is an unlikely microbiome expert — but thanks to the continued success of her company, Love Wellness, she’s become one.

The brand is currently closing in on selling 1 million units of one of its first product, Good Girl Probiotics, designed to support vaginal health. It’s a bestseller at Ulta Beauty. Now, it is launching two more probiotics, Gut Feelings and Clear Skin, targeted at maintaining a calm gut and combating acne, respectively. The new launches are the result of customer feedback, which the brand receives on social media, but also via its more official community, which meets on a platform accessible via its website and is called The Love Club. On the platform, customers can communicate with LoveWellness advisers, which the company said include a “growing team of trusted doctors, naturopaths, dietitians and scientists.” There are now over 13,000 members in the club, which the company said happened with “zero marketing investment.” It is promoted on the brand’s social media, as well as Bosworth’s own, and via newsletters. Members also serve as a sounding board for product development.

Love Wellness asked customers if they wanted to see more from the brand in the “microbiome collection” and received a resoundingly positive response. “It was an obvious next step to expand our microbiome collection, and that’s where all the leading science points us to anyway. There are so many microbiomes in and on the body,” she said, calling out the gut-brain, gut-skin and gut-vagina axes. According to Bosworth, these microbiomes need all the support they can get when everything from “pollution in the air to preservatives in fast food” can disrupt the microbiome.

Love Wellness was founded on the heels of some of Bosworth’s own health challenges, which led her to discover that she was severely deficient in a number of vitamins. “In 2015, I was experiencing crippling depression that doctors weren’t quite sure what to make of,” Bosworth said. “I had fatigue, vertigo and anxiety, until one doctor finally decided to test my vitamin levels. I found out that I had severe deficiencies.” They were so severe, in fact, that she wasn’t allowed to leave the doctor’s office until I was injected with vials of vitamin B. They “sent me home with handfuls of syringe needles and alcohol wipes.” Still, it was the first time she felt hopeful that she’d identified a root cause.

“This was a turning point for me,” she said. “Being a regular at the pharmacy and the doctor’s office, I became extremely disappointed with the information around women’s personal care and the options for personal care products. Everything was full of chemicals and anti-feminist messaging, and weren’t actually tailored to women’s specific biology — scented tampons, for example.” She observed a white space and launched Love Wellness, which initially focused on vaginal health products.

In the time since, she’s become an advocate for safe, science-backed wellness products. The brand’s multivitamin, which it launched last year, is “a direct reflection of why I started the business,” she said. “I was not able to find a multivitamin that supported me and the needs that I had.” She added, “A lot of the legacy brands’ multivitamins don’t have enough ingredients in them or the right quality types of ingredients in them. They use fillers, dyes and things that I’m not interested in putting in my body.” On the other hand, the newer brands “take the approach of less is more, which is not supported by the advice of most doctors and nutritionists. Supplements are not regulated by the FDA as drugs, but rather, as food. And as such, in spite of strong sales, they remain controversial. Multivitamins, in particular, remain an area worth consulting one’s own doctor about.

Bosworth’s life now, she said, is probably “similar to other founders.” That is to say, it’s not necessarily what you’d imagine for a former “Laguna Beach” star — although most brand founders don’t have 832,000 followers on Instagram. (Love Wellness also has a strong following on the platform, of 242,000). Bosworth wakes up early to prioritize self-care, because “nine hours of Zoom can flatten you,” she said. She begins with meditation, journaling or a walk. Then, “7:50, take vitamins,” followed by an hour of exercise  — favorite workouts include The Class by Taryn Toomey, SLT and Peloton.

Ultimately, the science of making “innovative and effective products” is Bosworth’s passion. “If things had gone differently, and I hadn’t been on reality TV, I would probably be a doctor or a microbiologist,” Bosworth said.