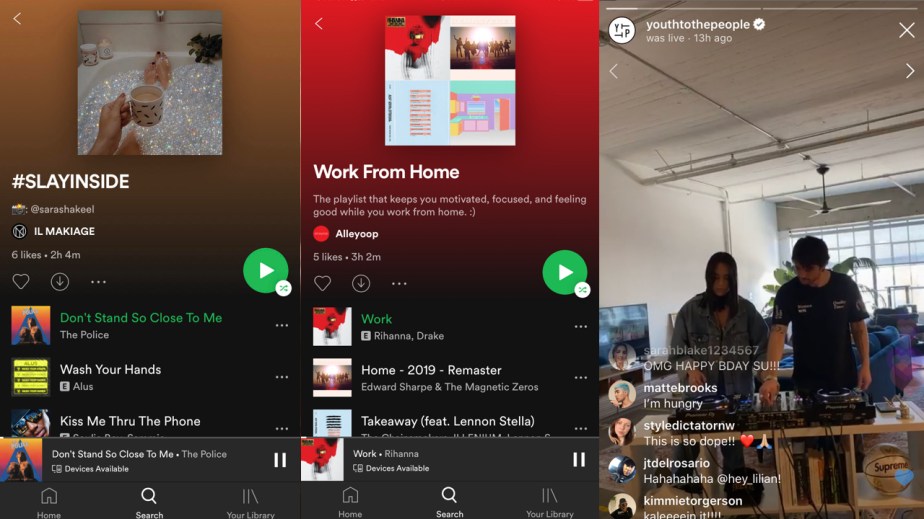 Faced with a content crunch, beauty brands are turning to playlists

As beauty companies shift their social strategies from pushing product to focusing on lifestyle content during the Covid-19 pandemic, they’re turning to music to build their communities.

Spotify playlists and IG Live DJ sets are among the efforts that beauty brands have been using to connect with their audiences under social distancing orders. While this trend was already in motion before the U.S. quarantine set in, it has been accelerated as a result of it.

Beauty and personal-care band Alleyoop launched a “Work from Home” Spotify playlist promoted for the quarantine last week, including topical songs like “Work” by Rihanna, while Il Makiage launched similarly themed playlists called “Werk from Home” and “SlayInside” with songs like Robyn’s “Dancing on My Own.” Bareminerals launched an upbeat “Daily Dose of Motivation” playlist for Spotify and Apple Music, with artists including Lizzo and Whitney Houston. All of these brands drive to their playlists through Instagram Stories.

Music has been a part of beauty brands’ ongoing push to position themselves as lifestyle brands. Glossier operates 30 Spotify playlists for a Spotify following of over 17,000, while Il Makiage first launched its brand Spotify page in August 2019. California-based skin-care brand Youth to the People tapped into the increasing popularity of IG Live during the quarantine with a one-hour DJ set on March 27, hosted by the brand’s co-founder and creative director Greg Gonzalez, who is also a DJ.

“Music has definitely been something that’s been at the core of the brand,” said Gonzalez. He noted that Youth to the People has had a Spotify account since June 2018 and that it launched a concert series at its Los Angeles headquarters in February of this year. The quarantine period, however, was the first time the brand ever hosted a DJ set over IG Live. The brand is offering a series of other IG Live lifestyle content this week, including classed on vegan cooking, yoga and lymphatic release.

“It’s important that we adapt our programming and think about everything we’re doing,” Gonzalez said. “We’ve done a lot more raw content.”

Alleyoop founder and CEO Leila Kashani Manshoory said the same about her brand, stating, “We’ve seen a huge uptick in interest in more content that is not specific to product.” She said although the brand had “dabbled” in lifestyle content before the quarantine period, it was “not at the level that we’re doing it today. I think the quarantine has made us step up our game because the interest is there, for sure.” For future programming, Alleyoop plans to create a meditation playlist for Spotify.

When it comes to the question of what kind of return can be received from lifestyle content, brands are prioritizing engagement over sales.

Manshoory said that “this is a brand play, more so than it is about revenue,” noting that if the brand were to measure ROI of content based on sales, “it loses its reason for being.”

In the long run, brands expect to continue an increased focus on lifestyle content. “It’s going to absolutely shift the strategy in the future,” said Gonzalez. “It has caused us to step up and do things that we’ve been planning on doing.”