Peyton List is well aware that celebrity beauty brands are launching more frequently than ever, though, she said, there weren’t as many when she started working on Pley Beauty over two years ago. List founded the brand, which launched direct-to-consumer on Wednesday, with Creative Beauty, the new incubator created in partnership with the talent agency CAA. While celebrity brand launches have become notorious for manipulating the media machine with a group Zoom and nary an interview, List spent a solid 45 minutes talking with me about her new brand, her journey from actor to entrepreneur, and the sense of responsibility she feels to her fans, including her 19.2 million Instagram followers.

Though millennials and childless Gen Xers may not know List, to a cohort of Gen Zers who were little kids between 2011-2015, List was Emma Ross, a beloved character on Disney’s “Jessie.” She continued the role in a spinoff show, “Bunk’d,” which ran from 2015-2021. Plus, since 2019, List has acted in the Netflix hit series “Cobra Kai.” Pley speaks to that demographic, with prices ranging from $16-$36. Plus, it features colorful packaging and shades made for “pleying” around with makeup. And it’s plastic-neutral, thanks to a partnership with rePurpose Global.

I asked List if she hesitated to release a “celebrity brand,” given their current proliferation. “It’s a question that I’ve definitely sat with,” List said. “But my heart is really in it. I’ve been involved in every step of development along the way.”

Through the process, as List saw more celebrity brands make their debuts, she said she asked herself what was behind the appeal and why they had become so commonplace. “I realized that everybody is the face for everyone else’s brand. And at a certain point, [you want to have] a say; if you’re going to be the face of something, you want to actually be a part of it and have it stand for something.” 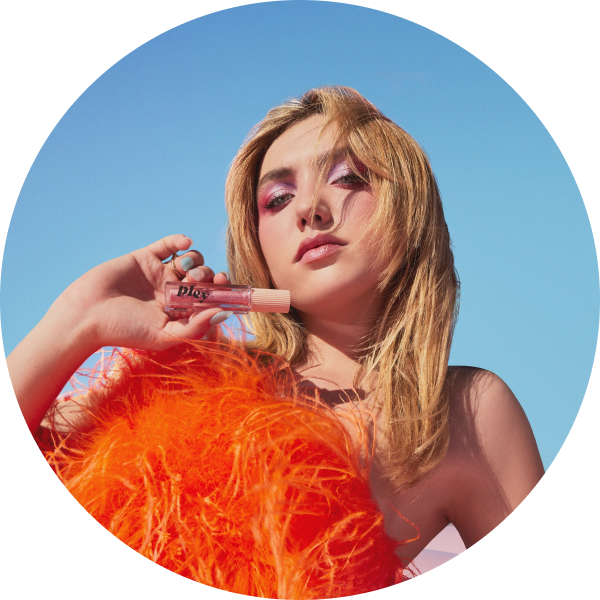 I realized that everybody is the face for everyone else’s brand. And at a certain point, [you want to have] a say; if you’re going to be the face of something, you want to actually be a part of it and have it stand for something.
Peyton List
Actor and founder of Pley Beauty

But, especially for someone who grew up in the public eye, there’s always the question of, “What if something goes wrong?” she noted, saying: “You’re the one who’s going to take the fall, if something is shit or something happens. A lot more is at stake. It’s definitely nerve-wracking. And that’s why I was like, ‘OK, if I’m going to do something, I want to make sure that it is truly from me and not something I’m just slapping my name on.’”

Part of the development of Pley took place while List was on the set of “Cobra Kai.” “I would be filming in Atlanta and [the Creative Beauty team] would fly out, bring all the formulas to me and sit around in a random conference room, and I’d give specific notes,” List said of the process, which also involved her visiting L.A. factories multiple times.

The brand markets itself as “clean.” List recalls being introduced to the concept of “clean” beauty by an on-set makeup artist who told her that Angelina Jolie used clean products. In the process of building Pley, she dug into what it actually meant. As a result, the brand is cruelty-free and Leaping Bunny certified, and was formulated without 1,350 “potentially harmful” ingredients, which meet both Sephora and Ulta Beauty’s “clean” standards. She also explored the troubling impacts of the beauty industry on our environment and decided to prioritize refillable packaging. “I learned right away that there are a lot of sacrifices you have to make when doing something sustainably, like you can’t have some of the colors you want,” she said. “You can’t have a mirror inside, because then it’s automatically not recyclable. Many brands just put the recycle symbol on the packaging, but they’re not really [recyclable]. It was important to me that we’re not destroying while creating.”

The price point was equally important to List, who said she “kept wanting to lower it as much as possible,” recognizing that many of her fans have only just entered the workforce.

In addition to the seven products the brand is launching with, it also launched a limited-edition five-piece “Cobra Kai” collection. “I have always gotten excited about TV show collaborations and limited-edition products,” she said. “Around the time we started talking about the ‘Cobra Kai’ one, I was obsessed with ‘Wandavision.’ I saw the “Wandavision” palette [a collaboration with Ulta Beauty], and I thought, ‘That would be amazing and it would be a no-brainer for us to collaborate with ‘Cobra Kai.'” List said. The five-piece collection includes special colors of the brand’s lip tint, face stickers and eyeshadow palette, as well as a highlighter and a face mist that don’t exist in the primary collection.

List took Glossy Pop through the brand’s debut products, which you can learn more about below.

To fans who can only buy one product, List recommends choosing a favorite from the four nine-pan recyclable and refillable eyeshadow palettes. “There are just really beautiful colors in each one, and you can create so many different looks with them,” she said. The palette is available in four colorways, including Nudie, Love Child, Modern Muse and Golden Girl. “Love Child is my vintage ’60s Californian dream,” she said. “I like how light the pigment is. You can build with it, but it goes on lighter, at first. And I like that more diffused eye look.” Consider it a hot tip for fans looking to get her look, her way.

The Pley Date highlighter sticks are List’s personal favorite products from the debut collection. “I love them. I use them every day,” she said. These shimmery sticks come in eight shades, but Pley Pink is List’s pick.

A gel eyeliner that wears for 12 hours and comes in eight bright shades, this product definitely speaks to the brand’s playful ethos. “I love using the red [Chili Pepper shade] underneath my eye,” List said. “I use eyeliner so much that [including] it was a no-brainer. I wear a lot of crazy colors on my eyes, and I want people to explore a little more and have fun. But we also did the basics like black and brown.”

“I wanted to make a hydrating, moisturizing lip balm with a tint, because that’s what I wear every day [on the set of] ‘Cobra Kai,'” List said, regarding what inspired Lip Habit. “That’s what I wear for most of my projects. I’m allergic to so many different lip products, and the California climate is so dry. Plus, I wanted to make something that would also be good under a mask. When you take it off, you still have a little tint and pigment.” Lip Habit comes in five colors, and List’s top pick is Strawberry Jam.

“I’m in love with our glosses,” List said. “I love throwing on a gloss alone during the day for a shimmer or layering it over Lip Habit for a bolder lip at night.” The gloss is available in 10 shades, and her choice pick is Ava.

This refillable, powder blush comes in five shades. Though List’s favorite is Pure Bliss, she said, “I’ll mix it with Ecstasy, even though Ecstasy is really dark. I like to mix all the colors and all the shades.”

These of-the-moment eye stickers come in four variations. Though they didn’t need “formulation,” the way other beauty products do, List said the team went back and forth on these; it took a long time to get them right. “We would sit around with adornments all over our faces, and we were like: ‘What even looks good anymore? Do these even work? Should we even do these?’ Some of us had our hearts set on them, and some of us didn’t. Our creative director was really trying to sell them, and I was like, ‘I don’t like it. I don’t think it works.’ But then she put them on in such cool ways. [Finally] I was like, ‘OK, you know what? You sold me on it.'”