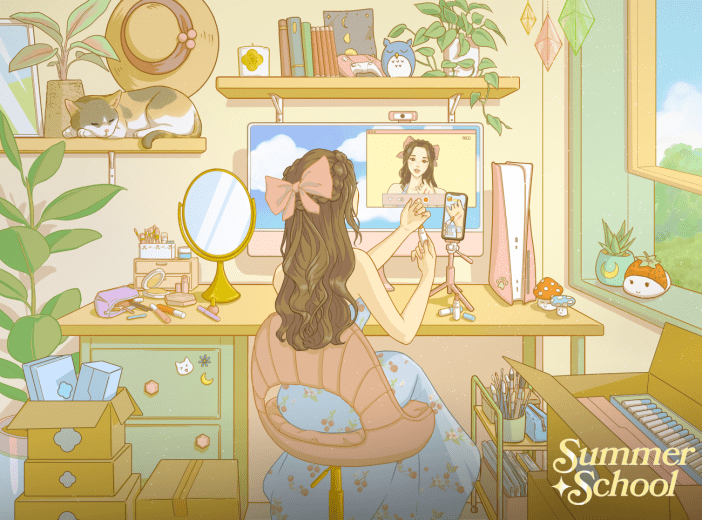 Some might call Michelle Phan the original beauty influencer. She started posting content to YouTube in May 2007. She continued to do so voraciously until 2015 when she shut down all of her social media channels, essentially disappearing from public life. Two years later, she returned with an 11-minute animated video called “Why I Left.”

Since then, Phan has been busy. She’s nourished her interests in cryptocurrency and has continued to work on her brand Em Cosmetics, which has put out a steady stream of product launches. Its most recent is the Everglass Lip Dew.

Now, Phan is launching an entirely new business venture: Summer School. According to its Instagram bio, it’s “Empowering a generation of creators to become the main character.”

Phan said she underestimated the learning curve of going from narrating YouTube videos to instructing digital courses. “I’ve been laser-focused on getting the curriculum ready because I’ve never taught; this is new to me,” she said.

The course will be for sale on summerschool.global and will be broken down into four chapters: one about self-development and mental and emotional wellness, one about “becoming a main character,” one about content ideation, and the fourth on monetization strategies and building “a community on your own terms.”

The course, if paid in one installment, costs $500. If paid in two, it’s $265 each time. Both options provide “live access to Michelle via Discord, five weeks of pre-recorded sessions in the course portal and self-study worksheets,” per a representative for Phan. It will offer a split between opportunities for participants to “self-study,” via worksheets and recorded lessons, and the chance to interface with Phan via “live weeklies where she will go over [the lessons] as a class, with everyone,” she said.

Phan has already started to think about how she will integrate her knowledge of and interest in the metaverse and cryptocurrency into the “semester’s” course, she said.

After all, she would know. “Everyone wanted to [be an influencer]. So I thought, ‘I should have that,'” Phan said of her past career. “When you can balance out your emotional and mental awareness, and really know what you want, you’re able to build a career that is more fulfilling. Even though my career was impressive, I didn’t feel fulfilled at all; I actually felt very empty and alone.”

The first chapter of Summer School builds on the foundation of balancing one’s emotional and mental wellness. “Because, as a creator, whether you are on camera or off camera, it’s a 24-hour job. The shop never closes,” Phan said. It incorporates things like breathing techniques she learned from Tibetan gurus.

“I want to be able to teach people how to be more present. When people see influencers, they want that lifestyle … because it does look glamorous, fun and exciting; they get to travel and do all these amazing things. But those influencers are not going to tell you how much work and sacrifice [they put in]. Even though it looks like they have a social life, they don’t have a social life. It’s smoke and mirrors.”

Phan said her goal is not to scare anyone out of attempting to be an influencer, but rather to help people understand what parts of the creator economy — and there are many — may be a good fit for them. After all, she said, “dreams are free, but goals take so much work to actually fulfill. Most people have crazy dreams, but they don’t have a map for how to achieve them.”

After the first chapter, students will hear from Phan about some of the more practical elements of content creation. For example, she calls TikTok a “lean-back” platform because of the way people scroll through as though they are watching TV.

“When people are taking the Summer School course, I want to help [them] mitigate burnout and feeling lost,” Phan said. “I want to bring more clarity to people so they can make better decisions that are truly for themselves, not for other people.”