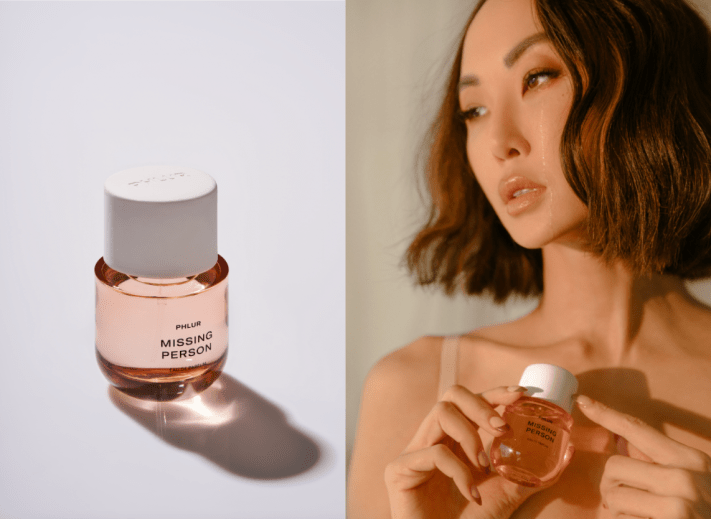 The beauty industry and especially fragrance aficionados may recognize the name Phlur. The brand launched in 2015 and was sold at retailers like Sephora and Credo. Ben Bennett and his company, The Center acquired Phlur in January 2021. Lim joined shortly thereafter and is now reintroducing the brand with her own spin. The Center is also behind Naturium, created with ‘skinfluencer’ Susan Yara; Saltair, helmed by model Iskra Lawrence; and the re-launched Make, with beauty industry veteran Carrie Barber.

Lim’s Phlur has an entirely new look and feel, new packaging and new scents. Only three of the brand’s original 10 scents will come back as part of the brand’s relaunch.

For her part, Lim, 36, has been candid about the fact that she is currently separating from her husband and the life change has impacted her. “I never really considered myself a fragrance girl. But during this time, I used fragrance to heal me,” Lim said. She was familiar with Phlur’s first iteration and admired that the brand was known for its transparency. “As a mother, that was very important to me. I had stopped wearing fragrance when I had my first child, because I was just so paranoid about all the stuff that goes into it,” she said. Phlur was one of the first fragrance brands to share an ingredient list, a move that is still rare in the highly protected world of fragrance.

Bennett has always associated the worlds of fragrance and fashion with one another. So, in looking for a business partner, Lim was a natural fit. “[I needed a partner who] had a strong point of view and was excited. In my mind, it was going to be somebody who expresses themselves through what they wear. It was a really natural fit for Chriselle to be that person,” he said. And, though Lim has 1.4 million Instagram followers and 2.8 million TikTok followers, Bennett said that a large following is not the top characteristic he seeks in a partner. “The first thing I look for is somebody who is an entrepreneur and a business person,” he said.

The brand’s DNA and the respect it’s garnered from fans of the ‘clean’ beauty space motivated Lim and Bennett to reinvent the existing brand, rather than start one from scratch. “[Phlur] had also already built a niche audience, so we definitely saw an opportunity there,” Lim said. Though Lim values transparency, the lack of a cohesive definition for ‘clean’ beauty means that Phlur will not “lean so heavily on that word,” Lim said.

The brand is relaunching DTC with just one fragrance — an entirely new one — called Missing Person. Though the name sounds dark, its meaning is actually quite romantic, Lim said.

“[It’s] about the longing for a person that you miss so much or the warmth of someone’s body next to you,” she said. “With my separation, the hardest thing for me was being in a relationship for 15 years, and then, all of a sudden, waking up and being alone, not having someone physically there. It just felt cold. It felt empty. And so I was longing for something to fill that void. And that’s what Missing Person is. It’s that void, which is so special to me. When I spray this, it’s a skin musk, so it feels and smells just like really good skin. It’s not overbearing and doesn’t really smell [like you’re wearing] perfume. It just warms up your body and makes you feel cozy and warm.” Specifically, the top notes blend ‘skin musk’ with bergamot nectar and sheer jasmine, while the middle notes include neroli blossom and orange flower, and cyclamen, and finally, the base includes sandalwood, blonde wood, and white musk.

Missing Person, like the rest of Phlur’s fragrances, will come in two sizes. The 50-milliliter size will run for $96, and a 9.5-milliliter travel size will cost $26.

“Fine fragrance has this connotation of being a little mature and intimidating and traditional. But we really wanted to bring Phlur to a new audience — to a younger audience that can appreciate not just the beautiful fragrances, but also the branding,” Lim said. To that end, everything is made with sustainability in mind, but the brand is far more colorful than its original iteration, which had minimal white bottles. “Color is really important, especially for fragrance. How do you express something online that you can’t really see or smell?”

The brand has a packed launch schedule with new scents set to drop regularly throughout 2022. On March 31, Phlur will launch on Sephora.com, followed by an in-store launch on April 8.

It’s only becoming more common for influencers, particularly those who have been in the business for a long time, to create brands. (Lim launched her YouTube channel and blog, The Chriselle Factor, in 2011.) Other long-term influencers, like Arielle Charnas of Something Navy, have already established brands meant to extend beyond their individual identity and content. To that end, Phlur was consciously built to stand on its own, with or without Lim, she said. After all, she noted, “If you’re relying on your brand to use you as its face and to churn out content, it is going to be really exhausting in the long run.”