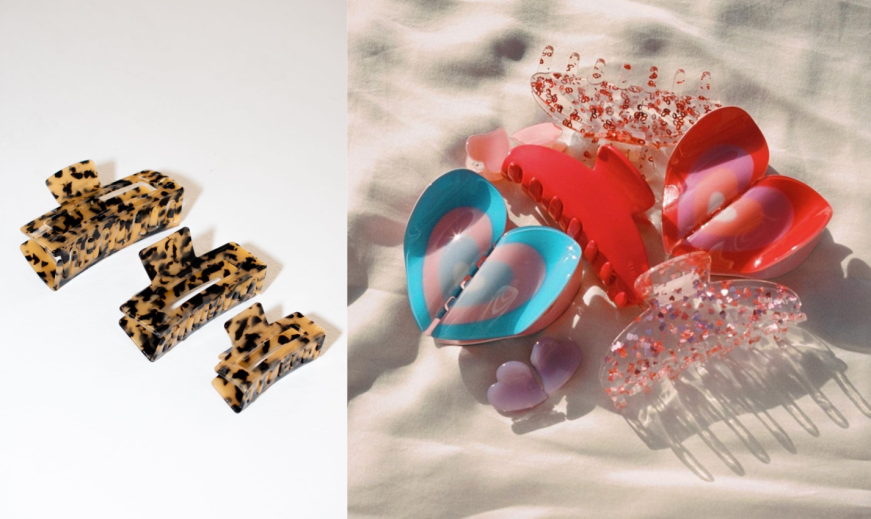 Fashion trends vary on the wearability spectrum, but one accessory that’s been dominating searches, influencer posts and TikTok for the past year is one of the easiest to adopt: the humble claw clip. Claw clips hark back to the ’90s, when the accessory likely stemmed from an ’80s trend, the banana clip. For what it’s worth: A December 2021 article on Allure.com also declared banana clips to be back in style. The story was based on a TikTok trend, as well.

Sure, some version of a claw clip has been in stock at your local drugstore since forever, but the brands currently making waves — and sales — in the category are elevating the simple hair holder-upper. Since 2020, claw clips have been on the rise once again. According to data analysis firm Spate, “searches for hair claws are growing by 114% since last year, with 81,000 searches on average every month. Searches for “how to wear/use a hair claw” are growing by 408% since last year, with an average of 5,400 monthly searches.”

One brand driving the trend is Emi Jay, which has become a favorite of “it” girls including Kendall Jenner, Hailey Bieber and Rosie Huntington-Whiteley, as well as influencers Tinx and Devon Lee Carlson. The brand debuted a collaboration with Juicy Couture in November 2021, fully leaning into the Y2K style that claw clips call to mind. The brand has also collaborated on one-off clips with brands including Summer Fridays and Frankie’s Bikinis, as well as influencer Matilda Djerf. The latter teamed with the brand on a capsule collection.

First launched in 2009, Emi Jay was co-founded by a then-14-year-old Julianne Goldmark and a friend, and started with a focus on hair ties — you probably recognize them. In the intervening years, Goldmark bought out her co-founder, and the now-26-year-old is the brand’s CEO. Her mother is its president.

Goldmark said her friends inspired her to make claw clips in early 2020. “At the time, people really weren’t doing [claw clips]. The only place that you could really purchase them was at, like, a CVS. And those were made of plastic. A lot of my girlfriends had started wearing those for working out, or hanging out; they just always had a claw clip on their head. It reminded me of how my mom would wear her hair when I was a kid. And they all were like, ‘You have to make claw clips. It’s gonna be a thing.’”

Emi Jay leans into a certain nostalgia and kitsch with its designs. Its bestsellers include a cream-colored clip with rhinestone cherries ($32) that was created with Djerf, its “Big Effing Clip” in designs like the green and glittered Virgo ($34), and various playful takes on its signature claw clip. That includes a daisy-shaped clip ($15) and a modern take on the butterfly clip (the Papillon, $20). Emi Jay also sells customized clips that can be bedazzled with one’s name. Goldmark said the brand has sent a handful of the $86 “Custom Big Effing Clip” to Tinx. It’s also sent one to Hailey Bieber, which was customized with “Bieber.” Bieber posted it on Instagram. Emi Jay products are sold on Revolve and at Urban Outfitters, as well as at cool hair salons like Jenna Perry Hair.

According to data from Spate, Emi Jay saw 154.7% year-over-year sales growth in 2021. And, in its January 2022 data, claw clips were still trending. On TikTok, EmiJay has just over 5,000 followers, but you’ll find plenty of content about the brand. For example, there’s this post from @brandingtips, which documents Goldmark’s origin story and success. You’ll also find unboxing posts, some with labels like: “My new personality after spending $34 on one hair clip,” and “POV: you’re easily influenced.”

Another brand to keep an eye on is Kov Essentials. It was founded by 24-year-old Chelsea Branch, who was inspired to start her company while working as a salesperson at Aritizia. “I saw an opportunity and a space in the market. There wasn’t a product that bridged the gap between being stylish and being functional. A lot of the clips that I saw customers wearing were just Amazon ones that everyone had. And I thought that there was space to develop that more — not only in terms of style, but also in terms of functionality.” The result is a “size-inclusive” hair accessories brand. Branch said she’s been struggling to keep products in stock since the brand’s launch via DTC in 2020. It started to gain momentum on TikTok in November 2020, when Branch posted prototypes of her collection before they were even available for purchase.

“It was the second TikTok we ever posted. We weren’t live on our website, and nothing was really completed. It got a few million views overnight,” Branch said. “That demonstrated to me the need for a product like Kov. The video we posted was of my hair, which is thicker, and the caption spoke to the need for a claw clip for thicker hair.” Quickly, she grew an email list of 1,000 people and “scaled the business very quickly after that, just based on TikTok.”

Branch said she can’t yet go into retail, because the demand has already outpaced the supply and her DTC site is often sold out. Though Kov offers a hair pin and a scrunchie, its chunky rectangular claw clips are its calling card. They come in three sizes: The Luna Clip ($20) is its smallest, the Cloud Clip ($24) is the medium-sized offering, and the Mega Clip ($27) is its largest. The Mega Clip, in particular, makes the style accessible to people with thicker hair for whom mainstream, drugstore claw clips simply won’t work.

You can almost see Branch’s past ties to Aritzia in Kov. Aesthetically, its clips differ dramatically from Emi Jay’s. They are only offered in simple hues like tortoiseshell, ivory and black. “I love sticking to the minimal tones, the neutrals — not only because of the aesthetic, but also [because] they’re more timeless,” Branch said. “Plus I believe in reducing waste. A clip is more of a timeless piece; it goes with everything.”

Kov has since amassed 241,000 followers on TikTok — though that includes fans and detractors alike. Multiple fans have praised the clips’ staying power. And Branch responds to the comments of people asking her to demonstrate their durability in crazy ways (such as “throw a cinder block on it”). As for detractors, people have posted about broken clips and claimed Kov’s products are, in fact, from Ali Express. In one post by the brand, Branch shows photos of an email in which she is asked to replace a broken clip, but the clip in question is not actually by Kov. Branch has posted videos to TikTok comparing her products’ quality to other products on the market, but declined to comment on the matter for this story.

And though the trend is not actually that new, it is still not slowing down. “This trend is not going anywhere. Search interest for hair claws began to pick up in May 2020, and the product has continued to gain traction with consumers at a sustained rate year-over-year,” said Yarden Horwitz, co-founder of Spate. “This product trend is in line with the shift of consumer interest towards effortless hairstyle trends, including mullets, curly shags and wolf-cut hair.”

The hand-care category is growing far beyond sanitizer

In the DMs with ‘SNL’ star Chloe Fineman

Shayne Oliver is back

Jaw highlighting is trending on TikTok, thanks to Bella Hadid

TikTokers are losing it over the anti-aging results from Sunday Riley’s new retinol eye cream, and it’s on sale