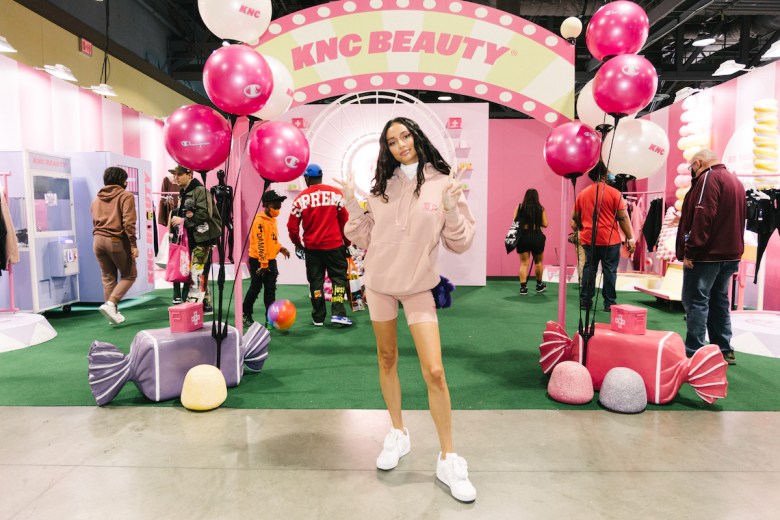 Founded in 2016, streetwear and music event ComplexCon made its comeback over the weekend after its pandemic hiatus. This year, the requisite streetwear brands and drops throughout the weekend were accompanied by an influx of female-owned brands, beauty brands, investment-focused platforms, and mass brands tapping into streetwear’s cache.

Women front and center
Walking into the event in Long Beach, CA, the first booth greeting attendees wasn’t one of the many men’s streetwear brands one would expect, but rather, KNC Beauty’s unapologetically pink booth, complete with the brand’s signature lip masks and a new fashion collaboration with Champion.

The KNC Beauty booth was just one example of an expanded female presence this year. Skin-care startup Topicals had a booth, as did several female-founded fashion and jewelry brands. As the first woman of color and the second woman to serve on the host committee of ComplexCon, KNC Beauty founder Kristen Noel Crawley emphasized the role of women for this year’s event.

“Women have always been very interested in streetwear, but there’s never really been a voice for us,” said Crawley. “A lot of times, you see sneaker drops or clothing drops, and they don’t have our sizes; it’s not really catered towards us. [But now] a lot of big companies and brands are finally seeing the value [of catering to women]. I just hope that it can open more doors and continue to progress.”

For the event, Crawley teamed up with Champion for a capsule collection focused on women’s empowerment. The collection is Champion’s most size-inclusive to date, with sizes ranging from extra-small to 3X. It will be widely available online and at retailers following its launch at ComplexCon.

“ComplexCon is typically a male event, but a lot of people don’t know that 50% of the attendees are women,” said Olamide Olowe, founder and CEO of Topicals, who appeared at the brand’s booth over the weekend. “It’s been really cool to see beauty brands show up.”

“I would love to see more female-led brands in the next coming years,” said Crawley.

The alternative asset class
From cryptocurrencies to NFTs and sneakers, alternative investments were all over ComplexCon this year. Going beyond the StockX-style resale model is startup Rares, an investment platform allowing users to buy shares of rare sneakers.

“Sneakers have appreciated faster than gold, faster than the S&P 500. And they’re on an upward trajectory,” said Gerome Sapp, founder of Rares, at the brand’s booth. “That trajectory is not just hype; it’s been that way for 20-30 years, since [before] the secondary market had taken notice of it.”

At the event, the platform officially launched an IPO for the Nike Air Yeezy 1 prototype, which it purchased for $1.8 million in a private auction in April 2021. It is the most expensive sneaker ever sold in that format.

Sapp talked up the value of sneakers as collectibles, calling them the art of Gen Z.

​​”This is a generational gap, a chasm. When you talk about a Jordan 3 [sneaker] or a Jordan 5 that was game-born, that’s art to them. They look at sneakers as art, and that’s how we’re asking people to look at it through the lens of our work,” he said.

Big brands continue to join the streetwear wave
Joining the booths of streetwear and beauty startups were event sponsors tapping into streetwear’s cool factor. They ranged from luxury fashion via a Prada x Adidas display to the booths of Ray-Ban, Crocs, Clark’s and Gillette.

For its part, Ray-Ban hosted a ComplexCon booth for the first time to promote its new smart glasses created with Facebook, which has since changed its name to Meta. Users had the chance to try out the glasses and snap photos with them at the booth, as well as purchase them. Lil Yachty made an an appearance at the booth to try the glasses, and the ComplexCon app alerted users when he was on his way there.

“ComplexCon is at the apex of culture. It really hits a target audience,” said Jenn Buglione, Ray-Ban senior manager. “One of the main reasons why we really stick out in a marketplace like this and in a smart glasses world is because we’re fashionable.”

Classic brands collaborating with streetwear remained a theme this year: Clark’s handed out free ice cream to promote its collab with “shoe surgeon” Dominic Ciambrone, while Crocs’ collab with streetwear brand Pleasures had people lining up outside the dedicated booth.