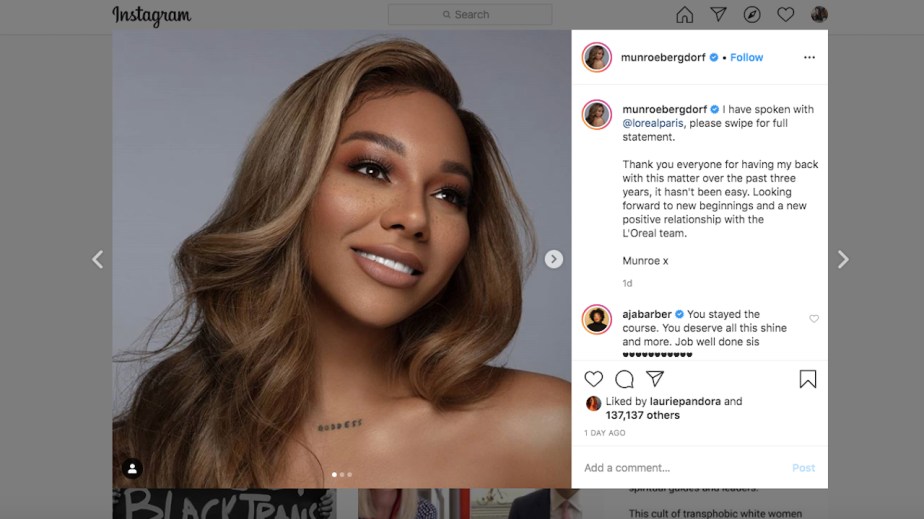 Brands now support Black Lives Matter, but they used to avoid influencers that did the same

Although brands are now embracing Black Lives Matter, speaking out on the topic was previously much more of a career risk for influencers.

After facing criticism for firing black transgender model Munroe Bergdorf in 2017, L’Oréal Paris made amends with her this week. A social media statement by L’Oréal Paris global brand president Delphine Viguier said, “I regret the lack of dialogue and support the company showed Munroe around the time of the termination. We should have also done more to create a conversation for change as we are now doing.” In response, L’Oréal Group is creating a U.K. diversity and inclusion advisory board that will include Bergdorf as one of its members.

Bergdorf also released a statement on her social media accounts, saying, “While what happened to me three years ago was extremely traumatic for me personally and professionally, sitting on a board to provide a voice and a champion for black, trans and queer voices in the beauty industry is important for me.”

“I’m really happy to see that Munroe Bergdorf and L’Oréal have reached an agreement on this matter,” said Aja Barber, a fashion writer whose video in support of Bergdorf went viral on Instagram last week, receiving 987,000 views. “I can only hope that this will remind all brands that it’s never too late to do the right thing when it comes to the mistreatment of brown and black bodies, racism and corporate responsibility.”

In tandem with brands showing newfound support for Black Lives Matter within the past two weeks, influencers and celebrities are becoming more vocal about a topic that was once considered to be career-damaging to speak about.

“There has been so much silencing,” said Barber. “There have always been rules about what you can and can’t talk about. Brands do not like the phrase white supremacy; it makes them deeply uncomfortable.”

Speaking out about racial inequality is still considered career-ending for some, an idea expressed by “Star Wars” actor John Boyega at a recent Black Lives Matter protest. The most famous, however, is Colin Kaepernick, who has still not been addressed directly by the NFL, despite its new statement in support of Black Lives Matter and black football players. Nike’s ad featuring Colin Kaepernick in 2018 was considered “groundbreaking,” “risky” and “provocative” at the time, given that no other brands were working with him.

“I have not seen a brand that has partnered with any political activist or affiliated themselves with ethnic communities for a creator-led campaign,” said Shaadow Sefiroth, a creator and digital consultant.

According to influencers, the idea that they needed to avoid voicing opinions on issues like racism was implicit, and some engaged in self-censorship to appear more appealing as potential brand partners.

“I’ve always maintained a PC level, just from working in television and fashion. I know that that all eyes are on me, and I have to be careful,” said influencer Melissa Chataigne, who has worked with beauty brands like Estée Lauder and NYX in the past. “I know it’s always better to stay ‘vanilla,’ especially if you’re working with different brands.”

Influencers say they have been more vocal about issues of racism due to recent events, and are not convinced that brands will automatically accept everything they say. Chataigne said that she has “spoken out more” in the past two weeks. “I worry that brands will be like, ‘Oh, she’s too controversial,’ but, so be it.”

Content creator Rabya Lomas, who has been vocal about racism and Islamophobia, agreed. “I have noticed that other influences who remain apolitical, and have a similar following or similar identity, seem to get more work. I can only think it’s my values and what I talk about that are potentially counting against me,” Lomas said. “I think, especially a lot of white influencers, are scared to speak up, because they don’t want to miss out on big brand campaigns. But, hey — guess what? I’ve been missing out ever since I started.”

In recent years, especially since the 2016 election, many brands have shifted from a politically neutral stance to taking a stand on social issues. Some topics, such as LGBTQ+ rights, were embraced earlier than others.

“I think being apolitical is seen as palatable for brands, because then they’re not seen as divisive,” said Lomas. “It’s actually more divisive to be apolitical because you’re leaving a whole subset of folks out of the room, out of the opportunity, and it’s unfair.”

With so many famous figures vocalizing their support, brands will have to take a look at their corporate culture to avoid situations like L’Oréal’s.

“For things to really change now, companies will have to change their entire structure. Fire people and hire new people; they need people who understand, otherwise change is impossible,” said Sefiroth. “An important element that is more often than not overlooked is a company’s culture — it is the most important as it defines the attributes that every single person who works there lives by.”