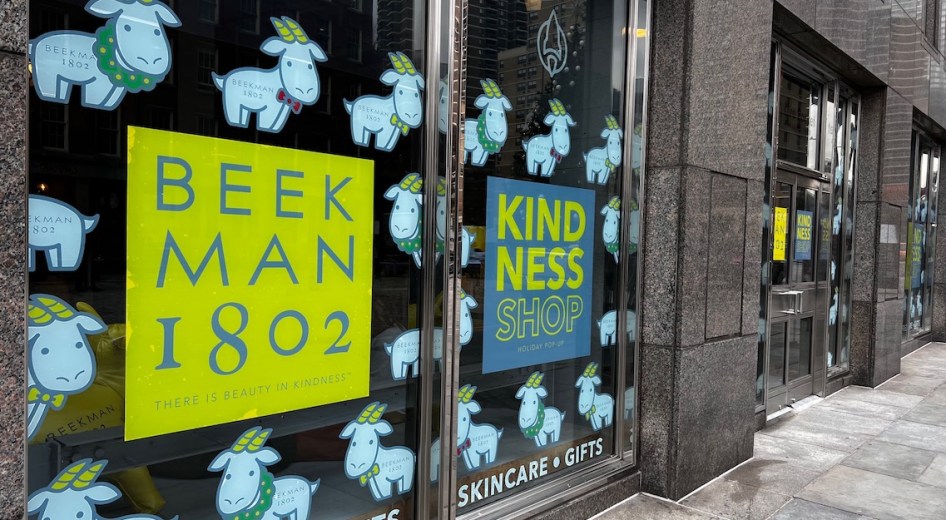 Beekman 1802 is trying something new this holiday season.

Opening November 29, Beekman 1802 is hosting its first-ever holiday pop-up shop, at the Seaport in New York City. Dubbed The Beekman 1802 Kindness Shop, it’s housed at the studio of livestream commerce platform Live Rocket, founded by former HSN CEO Mark Bozek. The brand will also host a livestream shopping event at the studio — it will be streamed on www.beekman1802.com and Facebook Live on December 1 at 6 p.m. ET. Both the pop-up and the livestream shopping event will feature exclusive deals and holiday gifts. The livestream itself will be powered by Firework, a video commerce platform.

Combining a pop-up and livestream brings together two of Beekman 1802’s most powerful assets: livestream sales and experiential retail. The 13-year-old beauty brand joined HSN in 2018 and QVC in 2019, after first appearing on the home shopping television network Evine, now ShopHQ. Jill Scalamandre, CEO of Beekman 1802, said livestreaming represents 39% of Beekman 1802 sales. She declined to comment on overall expected sales for 2022 or year-over-year increases from 2021. Private equity company Eurazeo Brands, which also owns Nest fragrances, made a majority-stake acquisition of Beekman 1802 in Dec. 2021 alongside co-investors Cohesive Capital Partners and the Cherng Family Trust for $92 million.

“This takes both worlds — physical experience and live TV streaming — and combines them. We’re hoping this is a one-plus-one-equals-three type of strategy for us,” said Scalamandre. “This is the first time we’ve done anything like this.”

Although Beekman 1802 still maintains its HSN and QVC partnerships, it has steadily invested in hosting livestream shopping events on its DTC e-commerce site since April 2021. Beauty brands including Tatcha and Nest fragrances have also taken to drawing audiences to their own websites with simultaneous broadcasts through Instagram or Facebook Live. Other social platforms, including TikTok, Pinterest and YouTube, have also moved into the livestream-selling space.

Gen-Z and millennial consumers are prime users of social shopping apps, thanks to their reliance on social content for product research. A 2021 survey by Klarna found that 71% of Gen Zers and 69% of millennials in the U.S. say they’re interested in watching livestream shopping events.

“Livestream shopping is a new form of storytelling. We all know how important storytelling is to rise above the noise of other brands and differentiate yourself,” said Scalamandre. “We’ve been successful at it in TV shopping, and now we’re asking, ‘How do you bring that level of storytelling and livestreaming into other retail touch points?'”

In the past, Beekman 1802 has emphasized in-person events to position itself as a lifestyle brand and underscore experiential shopping. It holds an annual Harvest Fest that attracts over 40,000 people to its farm in its home base of Sharon Springs in upstate New York. Meanwhile, in 2020, it transformed its storefront into the Rose Apothecary, a fictional mercantile from the popular television show “Schitt’s Creek.” Scalamandre, speaking at the recent Glossy Beauty & Wellness Summit in November, said Beekman 1802 is transitioning its brand positioning to being a science-led brand instead of solely a lifestyle brand.

But bringing customers into the fold is still crucial, and Beekman 1802 still refers to its customers as “neighbors.” Beekman 1802 has invited eight of its VIP customers who reside in the New York area to see the taping and interact with co-founders Josh Kilmer-Purcell and Brent Ridge, who will host the livestream and possibly appear in the broadcast. Beekman 1802 is putting paid ads behind the live-streamed episode on Instagram, Google and Facebook, and will be promoting it across its social media channels.

“People love the socialness of interacting [with a brand]. Being out here on the street [in the Seaport] instead of being in a studio comes through. And consumers want brand stories; they don’t have to all be brilliant stories, but they have to be real ones,” said Bozek.