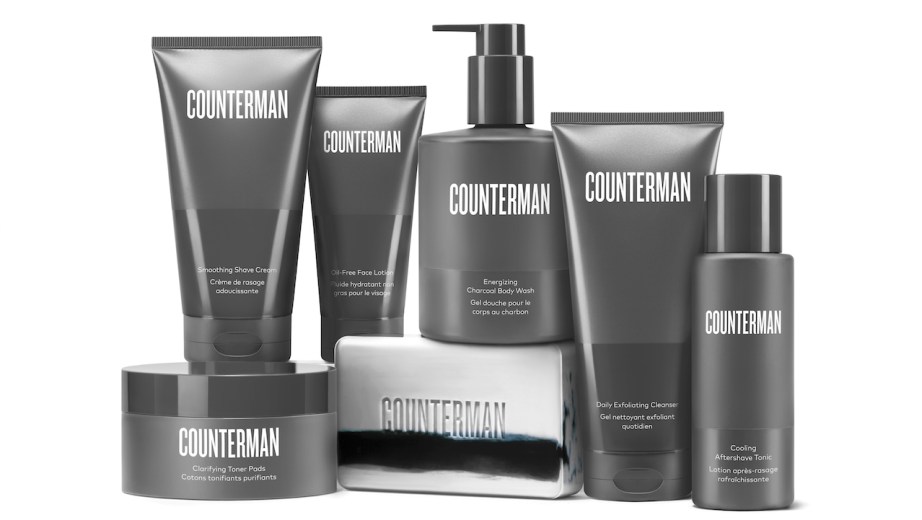 Beautycounter carves out a niche in clean skin care for men

On Tuesday, Beautycounter launched Counterman, a line of eight men’s body care, facial skin care, and shaving and grooming products ascribing to Beautycounter’s standards for clean products. Beautycounter has a network of over 35,000 sellers and a brick-and-mortar store in New York City that opened in November 2018. Notably, less than 1 percent of sellers and existing customers are men, according to Michael McGeever, Beautycounter’s chief merchandising and product officer. In order to reach men, the brand will not only appeal to women to purchase products on behalf of men, but it will also recruit more male sellers to sell directly to its target of men between 25 and 45 years old. Overall, the expansion toward men’s products represents a new chapter for Beautycounter’s business and also the maturation of the clean beauty market, which has predominantly been focused on women.

“For us, this is part of us growing up a bit,” McGeever said. “The first few years were about learning how to formulate clean products and deliver [efficacious] clean beauty and quality products, and now we are more sophisticated in terms of what we can deliver on. Counterman is an example of that delivery.”

Beautycounter, which was founded in 2011, had planned to create a men’s line for several years, but it was not until McGeever joined the company in 2016 that Counterman received renewed attention. The company engaged in extensive competitive research and held focus groups and consultations with Beautycounter’s network of sellers, and it found there was a dearth of clean men’s beauty products on the market. While clean beauty brands like Captain Blankenship, Ursa Major and Goop by Juice Beauty offer unisex products, there is not much specifically tailored to men. Natural beauty brands Oars + Alps and Aveda’s Men Pure-Performance are made for men, but they don’t necessarily fit within the “clean” category due to a lack of regulations between “natural” and “clean.” Beautycounter declined to offer sales or revenue figures, but it is said to have done between $300 million and $350 million in sales in 2018, and it’s expected to grow 33 percent in 2019, according to WWD.

In December 2017, Beautycounter tested an initial men’s line with a four-product gift set during the holiday season, which sold out in 12 hours, according to McGeever. Most of the purchasers were women. With the debut of Counterman, the company will not only try to sell to women who will buy product on behalf of men but also directly to three distinct male consumers: the “connoisseur,” who understands skin care and grooming and wants both, the basic guy who only wants grooming products, and the guy who is only looking for skin-care products.

To do that, the company is relying on its existing network of sellers who can potentially recruit male sellers. It may have been difficult for Beautycounter to recruit male sellers in the past due to the fact that its brand name, packaging, and the skin-care and makeup products were geared toward women, but the company should face fewer hurdles with Counterman, McGeever said.

“We are in the learning curve right now, but what I do know is that [anyone] who is good at recruiting can recruit both men and women,” he said. “We think it can be a meaningful business for male consultants, based on the number of products we offer.”

In addition to trying to reach more men through its peer-to-peer selling model, the company is taking out an ad in the February issue of GQ and launched on Tuesday an ongoing digital marketing campaign called “Good Guys Deserve Great Skincare.” The marketing campaign features four men who are seen as social activists and community leaders, including John Rose, the founder of the charity Waves for Water, and Nathan Bogle, the founder of sustainable menswear brand Double Eleven. The idea is to marry the clean-beauty values of Beautycounter with those of people who are giving back to their communities or creating change in their industry, said McGeever. While Beautycounter declined to specify how much it is investing for the launch in marketing and offline and digital ads, McGeever said it was “significant.”

“The majority of our investment is on marketing and paid digital, and the GQ ad is a test to put ourselves out there in a mainstream way to find out the response,” he said. “The key will be getting comfortable selling directly to men and also selling to women, who will be the first engagement point for men. There seems to be an appetite, and if we can demonstrate that through sales, you will see men have a bigger presence in our company.”