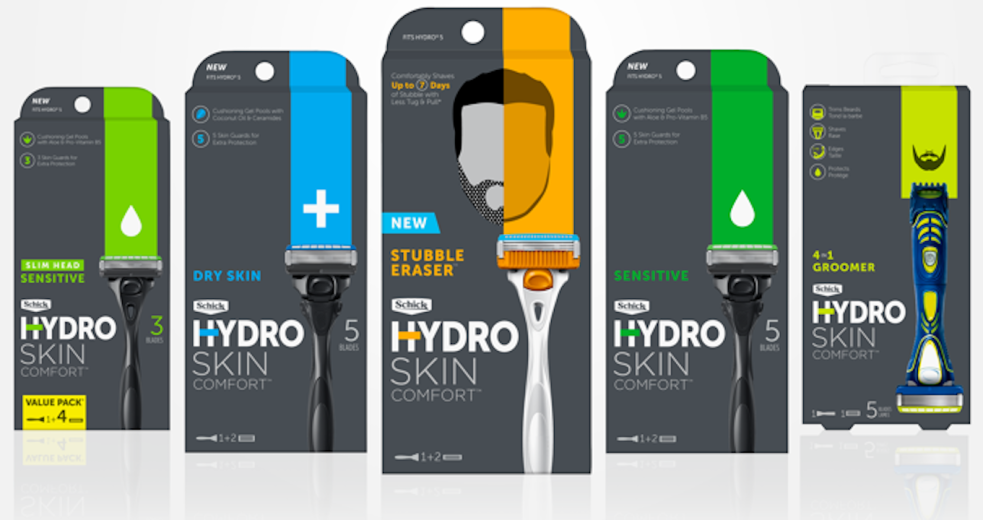 This week, I look at how men’s shaving brands are evolving.

Following the merger mess that was created when the FTC blocked its proposed acquisition of Harry’s last February, Edgewell Personal Care has gone back to basics by breathing life into its hero brands.

On Tuesday, Edgewell announced the rebrand of its best-selling Schick Hydro franchise to Schick Hydro Skin Comfort, in response to the recent decline in shaving due to the pandemic. The new razor can satisfy the need for a clean shave and also trim stubble using a company innovation called the “Stubble Eraser.”

“More guys are shaving differently, and different facial styles are growing. We recognized that there was an opportunity to provide a razor that would would help them with that,” said Matt Bell, Edgewell Personal Care CMO. Bell referenced internal Edgewell research which found that 20% of men regularly alternate between a clean shave and stubble.

Certainly men are shaving less in pandemic times. According to market firm Euromonitor International, the men’s razor market was already declining between 2019 and 2020 by 5.4% in the U.S. and 6.4% globally. It’s expected to decline another 0.6% in the U.S. and 0.8% worldwide in 2021. Other razor competitors have noticed and are looking to diversify. Unilever’s Dollar Shave Club released a new campaign on February 1 called “We Got You” that extols other men’s grooming needs, like struggling with too much back hair. It’s also trying to give men more optionality by plugging its new six-blade razor starter set offering a sharper shave, versus its four-blade razor, in the marketing blitz. As acquisition attempts have flatlined for Harry’s Inc., it just launched a new scalp brand called Headquarters via Harry’s Labs, which moves it away from its core competency of shaving. The company is also interested in acquiring its own brands.

Overall, Edgewell Personal Care suffered during the pandemic. It saw sales decrease by approximately 9% year-over-year to $1.9 billion for 2020. Still, Schick remains the No. 2 ranked brand in the men’s grooming category, based on sales, in the U.S. and worldwide, per Euromonitor International. The rebrand marks the largest branding and marketing investment across Edgewell’s portfolio for 2021. The company would not disclose its overall spend on the rebrand.

Schick will introduce grooming products for the first-time on Tuesday, as well, including a face wash, a shaving cream and a post-shave balm. To emphasize all of these changes, Schick will launch a new global ad campaign, “Your Skin Has Feelings,” on the same day, marking the brand’s return to television advertisements — it had been absent for three years. The spots will also run across digital channels.

“We think skin sensitivity is a big idea and we are justified in this investment. Men have an emotional connection with their razors and want a razor that can treat them right; the idea of your skin having feelings will resonate,” said Bell, who compared the campaign to Edgewell’s marketing foray with Schick’s women’s business last May.

All of these changes point to Schick evolving with the times, factoring how men today shave and how often, and what they care about in terms of skin care. Instead of launching an elaborate suite of skin-care products that may confuse shoppers, Schick is keeping the focus on shaving with its new grooming products.

When asked about the increased competition in the men’s grooming space because of startups, Bell said that “direct-to-consumer [positioning] certainly allows you to tell a cooler brand story; that’s definitely one of its immediate advantages in establishing that direct relationship.”

But the right retailers could facilitate similar storytelling, he said. “[Selling DTC] isn’t a requirement, in order to be able to tell your brand story and engage with consumers. That is something we’ve been able to do with our [retail] partners, and we continue to work with them to make sure we bring that brand story to life. We wouldn’t be making these changes as a company if we weren’t listening to our customers; we’re responding to new demand and will adapt our marketing and story as required.”

What can Covid-19 teach us about smell?

Is the BMI racist?