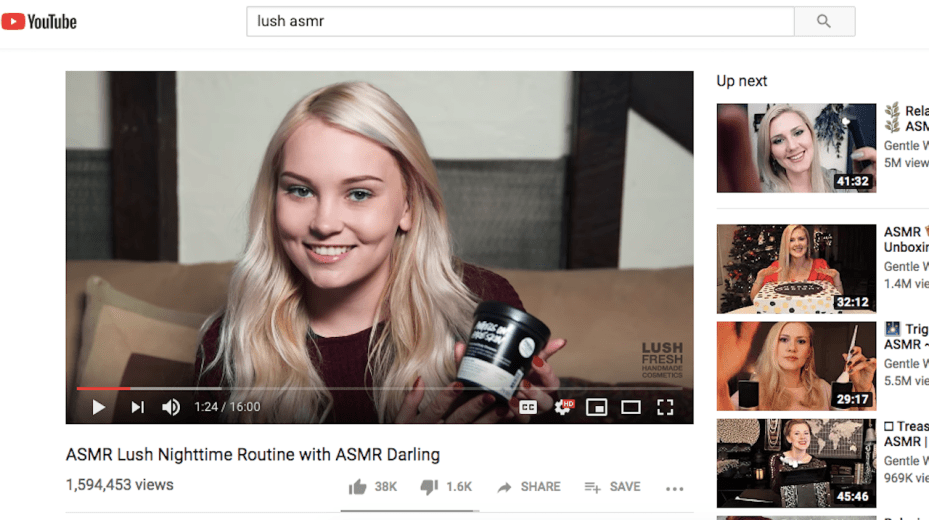 Beauty brands are tapping into the ASMR YouTube community

In a video from December 2017, a young blonde woman named Taylor Darling (known as ASMR Darling on YouTube, where she has over 2.3 million subscribers) sits in front of a camera and whispers greetings to her viewers before gently picking up a piece of lavender and squishing it between her fingers. Then she picks up and taps on a container of Lush’s face cleanser called Angels on Bare Skin before squishing the contents between her hands.

Darling is one of a handful of YouTube creators that beauty brands, like Lush, have worked with to create ASMR video content in the last 24 months. ASMR, which stands for “autonomous sensory meridian response,” describes a tingling sensation that viewers experience (typically on their scalp or neck) from listening to whispering, scratching, tapping or crinkling.

ASMR has seen a surge in popularity over the past five years, according to Google Trends data. As of February 2018, there were 11 million videos, and mega beauty influencers like Michelle Phan and Jeffree Star have dabbled in the space. Nearly 77% of ASMR viewers are also looking at beauty and fitness content, according to Google, and notably, almost half of all viewers are between 18 and 24 years old. Lush, FabFitFun, SK-II and Venn Skincare are all now seeing ASMR’s amplified opportunity for engagement.

FabFitFun routinely sends out its quarterly subscription boxes to ASMR creators and has worked with over 100 of them (all unpaid), including Goodnight Moon, who has 459,000 subscribers, Gibi ASMR, who has over 1.8 million, and 13-year-old ASMR creator Life With Mak, who has 1.4 million subscribers. In 2019, the brand plans to double the number of creators it works with, Janowitz said. She declined to specify conversion rates but said that ASMR videos are one of the top-10 categories to acquire new customers for the brand on YouTube.

When Lush worked with ASMR Darling in December 2017, it wanted to showcase its sleep products. Darling’s video was posted to Lush North America’s YouTube channel and garnered over 1.5 million views (there are 370,000 subscribers to the channel) as of April 2019. Lush saw a 5% lift in sales across all six featured products in the week after the video was posted, with  a “particularly strong impact” on sales of the Twilight bath bomb, which experienced a 56% lift, and the Imperialis moisturizer which had a 13% lift, said Nicole McRonney-Apaw, Lush North America public relations specialist for influencer marketing.

“It was a 20-minute Lush commercial that people were OK with,” she said. “We weren’t thinking about it that way, but it tied very well to our [category of] sleep products. As a result, we saw people connecting with the brand, and we identified an audience that loves our brand and loves ASMR, as well.”

Although Lush has not done any formal ASMR partnerships since ASMR Darling, the YouTuber independently published a Lush-themed video in January 2018 that garnered over 5.6 million views. Lush does not have any formal ASMR plans for 2019 but said the brand is considering related opportunities.

Venn is hoping its new ASMR videos that debut on Instagram and Facebook this week will resonate with both its Korean and U.S. customers. According to influencer marketing agency Sponsokit, the highest viewership of ASMR videos is in from South Korea, followed by the U.S., Finland, the U.K. and Sweden. The five in-house videos Venn created are 30-second clips and promote three new products: two cleansers and an oil-serum. The content featured includes a model squeezing the products and applying them, with jump cuts to images of plants and nature, said Brian Oh, co-founder of Venn.

Oh said the brand sees ASMR as a way to get customers to experience its premium products that retail for approximately $85, which has been a barrier for customers. Sampling programs in the past were fruitful but were prohibitively expensive in the long term for Venn. One campaign through product review site Influenster cost around $60,000 in 2018.

“Even though the person may not apply the product, at least through sound and visual, we might be able to indirectly convey what our products feel like,” he said. Details like how thick products are and how they look on the skin when applied are common questions the brand receives, said Oh.

While publishing the videos over the next five weeks, Venn plans on monitoring the response from followers, as well as asking its own U.S and South Korean focus groups for feedback weekly. The brand will also create a poll on Instagram for each video to get opinions.

“Once we obtain collective feedback, we will invest to create a full ASMR video with either a brand partner, like an influencer, or actual customers. We can use [that] on our website, share it with our retail partners and use it in marketing channels other than social platforms,” said Oh.