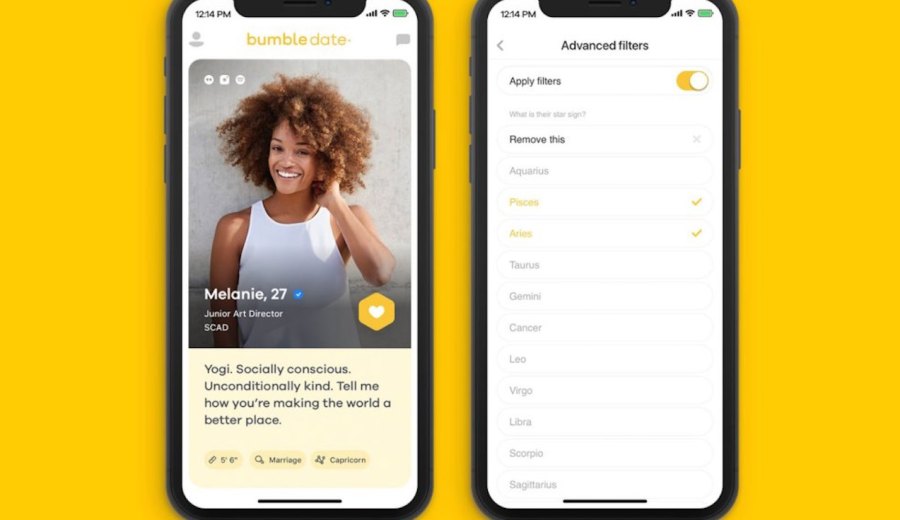 In an effort to reach new customers where they are, beauty brands are looking at dating app Bumble.

On Tuesday, Bumble debuted a reformatted version of its annual gift guide by offering mobile Bumble users a daily, weekly and monthly giveaway from beauty, lifestyle and fashion brands. Six beauty companies participated including Becca, Erno Lazslo, True Botanicals, Love Wellness, Ouai and Ipsy. Not all brands had to pay to participate but Bumble declined to state which ones, and Glossy estimates brands gifted approximately four products for the giveaways. Some brands also promoted the partnership through their own Instagram and email — requirements that are particularly low barriers to entry compared to partnerships with subscription box companies, which often require thousands of samples and ongoing social promotions.

Bumble has over 27 million mobile app downloads and 75 million registered users across mobile and desktop, according to a pitch deck acquired by Glossy. It approached each of the brands featured in the gift guide. In turn, brands are expecting to receive millions of impressions from the Bumble partnership, according to multiple sources.

“We want to connect with [our customer] where she is, and she’s clearly on mobile,” said True Botanicals founder Hillary Peterson, who also cited Bumble’s female-empowerment approach as a draw for the partnership. “We don’t want to connect with just anyone with a huge mobile presence, but with brands who have a similar mission as ours.”

In a marketing environment where reaching women ages 18 to 35 has become increasingly expensive, dating apps are a relatively untapped opportunity for beauty brands. Moreover, the rampant use of mobile phones for beauty purchases makes Bumble a worthy marketing channel. E-commerce in North America grew by 16% in 2018 to over $500 billion, driven by mobile sales which increased by 55%, according to e-commerce consultancy Absolunet.

Nearly 65% of True Botanicals consumers are under 35 years old, and 75% are under 45. Sixty-nine percent of its customers shop on mobile, said Peterson. The brand is predominantly viewing this partnership as an email capture opportunity, and Bumble is guaranteeing the brand 3 million social impressions, she said. Email capture was also a motivator for Urban Decay when it partnered with Bumble on the launch of its honey eye shadow palette in September, said Tina Pozzi, Urban Decay vp of global brand marketing. She declined to cite specific figures but said the brand received almost double the number of emails it expected.

The share of 18- to 24-year-olds who report having used online dating apps or websites has nearly tripled in the past two years, and 15% of all Americans have used a dating app or online dating website, according to Pew Research. The combination of the right audience and their investment of about 10 hours a week on datings platforms makes dating apps an attractive place to invest.

To support its participation, True Botanicals will share one Instagram post and three Instagram Stories posts to its 152,000 followers. It will also promote Bumble’s giveaway in three marketing emails with its database; Peterson declined to state the number of customers it engages with through email. The gift guide will also be promoted through Bumble’s Instagram Stories, and Bumble users will see a dedicated page when using the app that showcases a participating brand’s giveaway for the day, according to a Bumble spokesperson. True Botanicals previously worked with Bumble Bizz (a networking pillar of the company) for a pop-up store in Los Angeles in 2018.

“We have found that this type of partnership, particularly with a brand that is so well-aligned with us, is the most efficient way to meet new audiences,” Peterson said. She said 3 million social impressions is a “higher” figure compared to other digital partnerships.

Bumble’s positioning as a lifestyle app that empowers women across friendships, relationships and career opportunities is what drove Erno Laszlo to participate in the gift guide, said Kristy Watson, Erno Laszlo CMO. The 92-year-old skin-care brand, which has a primary customer of between 29- and 35-years-old, has designed its general holiday theme around self-care. In addition to emailing its entire database (Watson declined to state how many people it contacted) and promoting the partnership through Instagram and Facebook channels, Erno Laszlo will pay to promote the Bumble giveaway in order to earn an additional 2 million views on its partnership. She declined to provide advertising figures, but said the Bumble partnership was a significant part of the brand’s holiday strategy and positioning as a lifestyle brand, which justified the paid advertising to promote it.

“You have to offer the customer more than a product, [which is why] we love this lifestyle angle,” she said. “We want to hit people where they are and reach them while they are living their daily lives.”

Erno Laszlo had previously worked together with Bumble for a series of Bumble events in August, and this is the only dating app the brand has worked with. Over the next three to 12 months, the brand will likely sign on for more partnerships with Bumble, provided engagement from the holiday partnership is on par with that of the summer activations.

“Capturing the email is not the hard part, but it’s getting the email to do what we want, which is get someone to then engage with the brand via an activity, show up for an event or make a purchase,” she said.