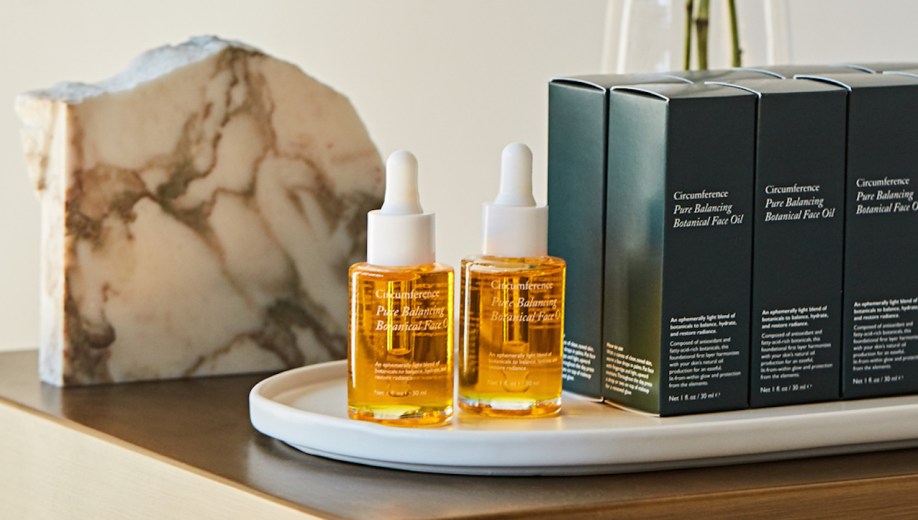 1 year in: How skin-care brand Circumference is navigating sustainability as it scales

Launched in April 2018, skin-care brand Circumference is founded on a 360-degree approach to sustainable beauty (hence its name). It sources raw materials like wild-grown sacha inchi and sea buckthorn from Peru and the Himalayas, which are then brought to a manufacturer in the U.S. for processing and extraction to be blended, bottled and sold. The resulting byproducts are subsequently donated to farms as feed and fertilizer.

As the founders, married couple Chris and Jina Kim, have worked to grow their business, one of the biggest hurdles they have faced has been navigating how to scale their business while also remaining sustainable — and without breaking the bank. The brand’s current assortment consists of five core products that all launched in April, but three more products — a moisturizer, a cleanser and a cleansing balm — will debut by the end of 2019 or early 2020. The self-funded brand is distributed through boutique retailers like Forty Five Ten and Need Supply Co., and also sells on CircumferenceNYC.com. The founders declined to share sales figures, but said that approximately 65% of sales are via its direct-to-consumer site.

The couple spoke with almost 30 manufacturers in the Tri-State area before finding one that would allow them to supply their own ingredients, said Jina Kim.

“We had to dig into the supply chain, meet with manufacturers and suss out where things are coming from, how they’re being grown, how farmers are being treated,” she said. “Natural [beauty] is a hot topic to the industry, but that doesn’t always mean it’s sustainable.”

At the same time, Circumference was trying to locate a manufacturing partner, it was also trying to figure out its ingredient sourcing and how to scale it over time. The brand decided to keep ingredient costs low by using ingredients with multiple uses, like sacha inchi, across multiple products. Sacha inchi has both moisturizing and antioxidant properties, so it can be found in the brand’s face oil and detox face mask. Circumference also uses byproducts from other industries, such as olive leaves from the olive oil industry, which not only have their own distinct skin-care benefits but also come at an inexpensive price.

When it came to packaging, Circumference tried to employ a similar approach of waste-not, want-not. The main choices for primary packaging containers were glass and plastic bottles, and while glass makes more sense from a sustainability perspective, it also increases the cost of shipping from the manufacturer to the brand. In fact, the first bill the brand received for bottles, secondary packaging and labels was a lump sum of $40,000 for less than 10,000 units, Chris Kim said. The couple had a discussion after receiving the invoice about whether they really wanted to pursue this undertaking, said Jina Kim.

“We had to have a real talk about how much we believe in this mission, and whether we think consumers have an appetite for this and are open to hearing our story,” she said. “We realized we’re at a place where people care about the brands they are giving their dollars to, and they want to hear about mission-driven companies.”

What the brand opted to do was only use three packaging options across its products. The two face masks, the face oil and the vitamin C serum share similar bottles, though the toner’s is unique. The upcoming product launches may be produced in the same vein, although the company has not been determined yet what design each will have.

“It’s a continual challenge, and we have to constantly remind ourselves that there is no such thing as a perfectly sustainable brand,” said Chris Kim. “There’s always something you can do better, and it comes down to having to choose our battles.”