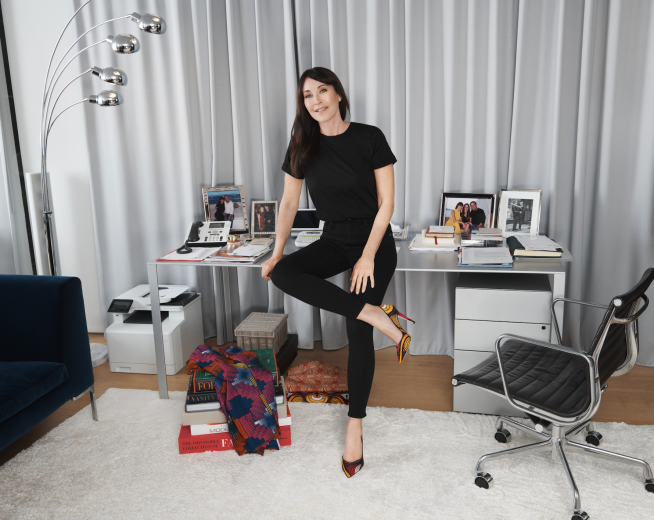 “Women work ourselves to death hoping someone will notice”: Tamara Mellon won’t give up the fight for equal pay in fashion

There was a pause — not eternal, though long enough to forecast the answer to come — before Tamara Mellon spoke.

You could forgive her measured reply. Mellon, the fashion luminary, an A-list presence in footwear since she co-founded Jimmy Choo and later, in 2016, launched her own eponymous footwear line, was weighing whether she felt encouraged about the future of pay discrepancy in the workforce.

It is a big, thorny issue — one that Mellon has tangled with for decades. Find a report on the matter, and the results are sure to disappoint. The World Economic Forum, for instance, worries that the global pay gap between men and women may take longer than 200 years to close.

In fashion, the situation is particularly dire. In 2018, the British government required all companies, under threat of fine, to report their internal pay numbers broken down by gender. The results could have been predicted, for it did not take an Oxford PhD to conclude that there exists a worldwide imbalance in the amount women are paid for the same work as men.

And yet there were revelations still that are especially insulting. English fashion and beauty brands — many of which employ an overwhelmingly female staff — were among the worst pay gap offenders.

“It’s terrible,” Mellon says. “Which is shocking, considering [fashion] has a majority of female customers.”

Companies like Condé Nast Publications Limited, which runs the magazines Vogue, Vanity Fair, GQ, and others, and women’s retailer Karen Millen were singled out by a New York Times analysis of the British government report. Karen Millen, for instance, was found to have been paying women 49 percent less than men on a median hourly basis. On a company-wide level, reporter Elizabeth Paton noted, that meant that men’s pay was double that of women.

Karen Millen responded with a statement that may well have been echoed by each culprit in the fashion industry. “Our gender gap paints a misleading picture about our commitment to gender diversity and equality,” it read, insisting the gap only appeared so vast because the majority of the company’s lower-paid retail assistants and distribution center staff were women, and that the small percentage of male employees in its ranks were higher-paid workers in the head office.

Mellon herself experienced this first-hand. At Jimmy Choo, she was among a rare breed in fashion — a female leading both brand and operations. She co-founded the fashion house in 1996, and for its first five years served dual roles as creative director and CEO. Mellon stayed as a top executive of the company until she left, in 2011.

And yet even Mellon had to fight for everything she got. Through multiple sales of Jimmy Choo to private equity firms, Mellon — no matter that she was the brand’s most visible name after Choo sold out of the company in 2001 — often had to argue for her compensation to match that of other male stakeholders in the business.

During one negotiation, somebody looked to Mellon and alleged that she was “already rich enough for a woman.” There was only one way for her to feel. “It’s very shocking at the time,” Mellon says. “You don’t quite know how to respond. And that was when I was particularly [new to] talking about my pay. It makes you feel completely undervalued. You feel like the work you’re doing is not seen as valuable as a man’s work. It’s very hurtful.”

She has since become a vocal agitator, a loud critic of pay discrepancies in fashion and elsewhere. In Elle, Mellon said: “Women work ourselves to death hoping someone will notice… Every woman should have the confidence to ask for more.” In a guest column for The Hollywood Reporter, she wrote: “I encourage all of my employees, no matter their age or position, to own their voice and speak up.”

Mellon, in a fitting response for a footwear titan, has walked the walk. She has been active in public events raising awareness for pay inequality, and Tamara Mellon has followed suit as a company. Its site has organized email protests advocating for the Paycheck Fairness Act, directing customers how to send notes to state lawmakers and US senators. Last year, in honor of Equal Pay Day, Tamara Mellon’s shoes were discounted 20 percent — the same amount that women earn less than their male counterparts.

She may never see the day when the global pay gap, especially within the fashion industry, is closed. But still Mellon draws strength from the future — the people who will carry on this fight by her side.

She thinks of her daughter, Araminta, who has observed a mother loudly standing up for what she believes.

“I think she’s learned so much along the way,” Mellon says. “I’ve been a feminist for a long time now, and she’s grown up with that. So I think she absorbed it by osmosis, and I’m excited for the future because she’s going to be able to speak up for herself in a way that I didn’t have the courage to when I was young and starting out.”

To learn more about how brands like Tamara Mellon are tackling issues like sustainability, diversity, global perspectives and technology, check out the Shopify Plus Fashion Industry Report.