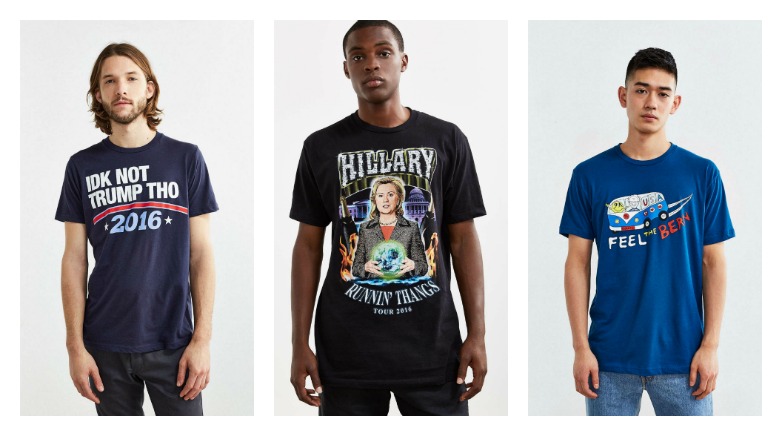 Urban Outfitters, never shy to be evocative in its product development, is currently selling anti-Donald Trump shirts, mugs and stickers at its retail stores.

The company joins a number of retailers that have recently started to capitalize on the 2016 presidential election, including American Apparel’s “Make America Gay Again” T-shirt campaign, a play on Trump’s campaign slogan and an effort to support LBGTQ rights. The Trump garb includes a shirt with the phrase “IDK Not Trump Tho,” a pin that reads “Trump 20Never,” anti-Trump mugs and a book of Trump quotations designed to look like Mao Zedong’s Little Red Book. The gear is currently being sold alongside seemingly pro-Hillary Clinton shirts, including one that reads “Hillary Runnin’ Thangs Tour 2016.”

Thomas Rankin, founder and CEO of Dash Hudson, said the move is a savvy strategic move by Urban Outfitters to engage with its customer base, which is largely in the millennial age range and skews liberal.

“Generally, the best brands want to be part of movements that their customers care about. This helps them align the brand with current beliefs, deepening the connection,” Rankin said. “Urban Outfitters knows that its customer would not generally be a Trump supporter. Further, any timely brand or product relationship with a celebrity tends to drive discussion and engagement around the brand.”

He said that when brands connect with social movements, they often see the highest level of engagement, noting a popular pro-LGBTQ Adidas post last winter that was the most commented post of all time on Instagram.

And yet the move to sell outwardly anti-Trump goods seems at odds with the political leanings of Urban Outfitters CEO Richard Haynes, who has historically donated to Republican candidates. Urban Outfitters declined to discuss Haynes’s connection the Republican Party in an email to Bloomberg earlier today.

“[Urban Outfitters] respects the viewpoints of all customers and employees and does not take positions in electoral politics,” the email reads. “Our product selection is largely driven by the demand of our customers and artistic partnerships.”

However in spite of apparent recent support for Hillary Clinton (as well as Bernie Sanders), the retailer previously targeted the presumptive Democratic nominee: In 2014 Urban Outfitters sold a “Hillary Nutcracker,” widely decried sexist, for being a plastic Clinton that was able to crack nuts between her legs. The outside of the box read “Is America Ready for This Nutcracker?”

For other retailers, like American Apparel, taking a political stance is seen as a way to help improve the image of a struggling brand. Shrouded in controversy over poor sales and corrupt leadership, the company tried to shake off the negativity by teaming with the Human Rights Campaign with its “Make America Gay Again” apparel. Julie Noiman, general manager at Tigerspike, told Glossy last month that “a message of inclusivity is a smart move for American Apparel.”

Urban Outfitters has long had a history of getting into trouble for its pithy, and often offensive, popular cultural riffs. In September 2014, the company was condemned for selling a “Vintage Kent State Sweatshirt” in a red hue with what many consumers thought appeared to be a blood splatter in reference to the 1970 Kent State massacre. Urban Outfitters was also in the hot seat for a 2012 shirt that appeared to be making light of the Holocaust, with a six-point star stitched to the front that was reminiscent of the Star of David that Jews were required to wear while living in Nazi Germany.

Consumers on Twitter largely seem supportive of the anti-Trump gear, though, expressing enthusiasm upon seeing it in the stores.