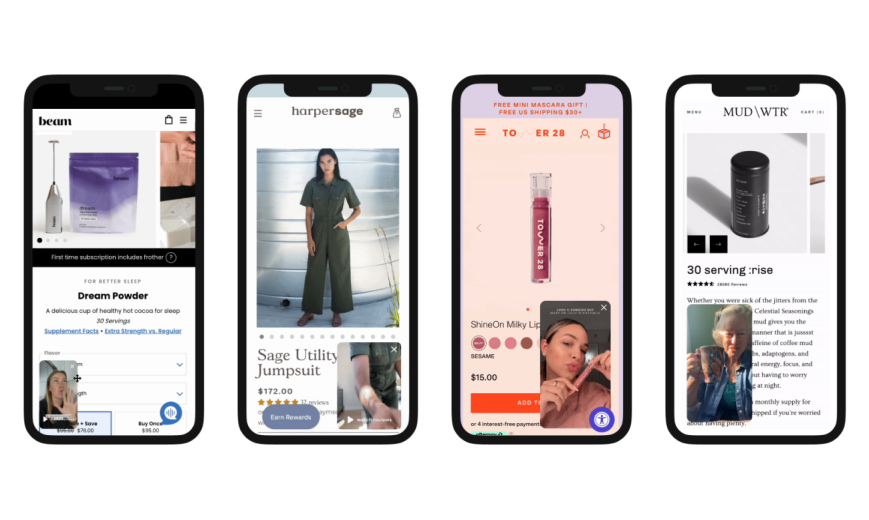 How brands are making e-commerce feel like social media

Social media is changing every day, a fact that’s recently been highlighted by the rapid rise of TikTok, Reels and YouTube Shorts. But one thing that seems to be holding true is the power of video, particularly when it comes to influencing and selling products.

A newer way brands are leveraging this is by integrating video — some TikTok-inspired and some directly from TikTok — onto their e-commerce sites.

Since August, “clean” makeup brand Tower28 has integrated UGC videos on the product pages of all of its key products, or items that aren’t sets or limited editions. Jessica Hou, senior e-commerce manager at Tower 28, said the brand “saw lift and conversion right away,” as well as a spike in “time spent on the website and product pages,” after launching the feature. According to Gander, which enabled the feature, Tower 28’s conversion increased by 28% in the 16 days after launch.

Some of the video content the brand leveraged out of the gate already existed. For example, the video on the page for its bestselling MakeWaves Mascara was initially created for its Sephora product page. For videos on other products, Tower28 tapped Gander’s influencer network. Popular video content includes before-and-afters in progress and information about ingredients. Tower28 pays $59-$250 a month for the video embedding and organic UGC.

“Mobile websites are going to start mimicking social media,” said Kira Jackson, investor and head of partnerships at investment firm RX3 Growth, in an October TikTok on her personal account. She called out platforms facilitating this shift, including Gander, Foursixty and Tolstoy, all launched since 2014. All hinge on the notion that consumers “going shopping” is being replaced by consumers “always shopping,” and that social media is at the core of the shift, Jackson said on a call.

These tech companies speak to the continued evolution in how we take in content and use it to inform purchasing decisions. No longer is it enough to see makeup shade swatches, for example. Customers want to hear about a user’s skin type and how a product worked for them, to infer how it will work for themselves. As Jackson said in her post, referring to a private fundraising deck, short-form video “impacts 93% of consumer purchase decisions, and 70% of consumers prefer it over image and text.”

A jewelry brand could leverage videos on its e-commerce pages by “showcasing how products don’t tarnish in water” or “how to stack pieces from a recent collection,” she said.

For its part, the mission of Gander is to make “online shopping more human,” founder Kimiloluwa Fafowora, age 26, said. The company launched in summer 2021 and counts companies like Good American, Aavrani and Tower28 as customers.

It rests on the distinction that short-form video is effective for sales, while TikTok is an entertainment platform. “People don’t want to be sold to 24/7 when they’re swiping on their phone,” said Fafowora. According to Fafowora, educational videos best belong on e-commerce sites, where shoppers are considering a purchase. “That’s where they’re looking for information — they want to figure out what shade they should pick,” she said.

“It’s super expensive to produce a photoshoot with a [diverse range] of models,” Fafowora said. “UGC not only allows brands to show a diversity of individuals, but it also empowers individuals to help other people make [buying] decisions.”