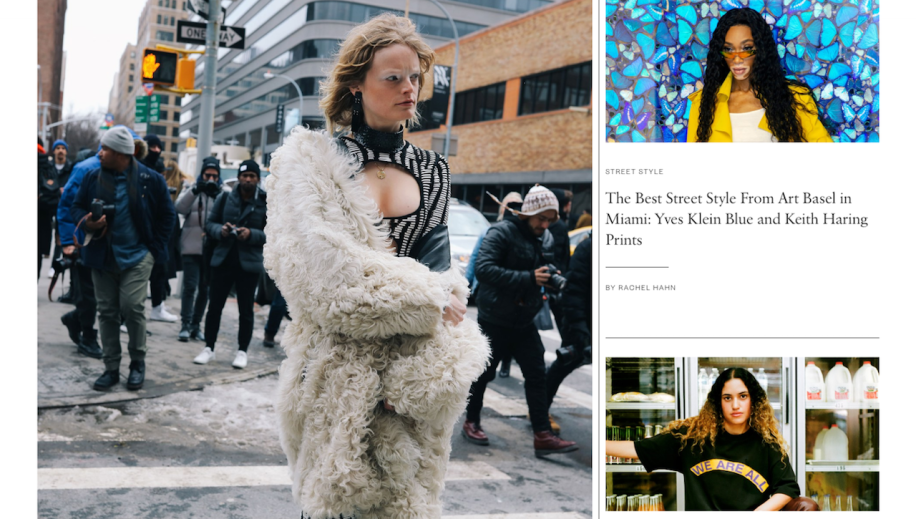 Condé Nast continues to pull different levers to succeed in today’s rapidly changing digital media climate. It recently announced it will be implementing subscription paywalls for all of its titles by the end of 2019, and it launched a business-focused newsletter out of its international arm dubbed Vogue Business, also in January. Now American Vogue is doubling down on shoppable content.

On Feb. 5, Vogue debuted VogueWorld, a distinct digital sub-brand combining the title’s celebrity and street style content with e-commerce. VogueWorld will live on Vogue.com, and Vogue’s online app will rebrand as VogueWorld. The platform is an expansion of Vogue’s existing street style package which began in February 2018 and profiles influencers across the globe, said Sally Singer, Vogue creative digital director.

“We found that our coverage of street style content was among our most engaged-with content, and not just in the major cities like New York, Paris and London. We wanted to bundle more of that together and amplify it by making it shoppable,” said Singer.

Vogue digital director Anna-Lisa Yabsley said that past VogueWorld features accounted for over 30 percent of Vogue.com website’s traffic in 2018 (according to Comscore data, the site had 12.7 million unique visitors in December 2018, which was up 35 percent year over year). Those articles also had up to three times the completion rate of other stories on the site, said Yabsley.

For Tuesday’s launch, VogueWorld debuted stories and corresponding shoppable content featuring 100 influencers, from Italian singer-songwriter Claudia Lagona (known as Levante with 607,000 Instagram followers) to Sho Madjozi, a rapper who hails from South Africa with 293,000 followers. Singer said VogueWorld will add pieces of content to the franchise on a daily basis.

Though Condé Nast tried to meld its fashion coverage into e-commerce via the revamped Style.com in 2016, the new VogueWorld will rely on an affiliate link model through Skimlinks, Amazon and select direct retailers, like Moda Operandi, to increase streams of revenue for the title.

Most recently, the title has leaned on additional revenue tactics in a number of ways: Vogue began charging some fashion houses to post their runway collection images for $20,000 a year, according to Business of Fashion, and it’s launching a new membership club in the first quarter of 2019, which charge members up to $100,000 for access to Vogue’s editors and events. Vogue.com’s net commission revenue via affiliate links was 150 percent higher than the year prior at the end of the fourth quarter, and while Condé Nast would not break out projections for VogueWorld, specifically, it said companywide, it expects to grow e-commerce revenue by 300 percent in 2019.

“VogueWorld is hyper-focused for audiences that are fashion-obsessed,” said Pamela Drucker Mann, Condé Nast chief revenue and marketing officer. “It’s the nucleus of what Vogue is about. Even though it’s highly curated, it’s fashion distilled, slightly raw and meant for a savvy consumer that our partners are looking to reach.”

In some ways, shoppable content is perhaps the purest form of extending Vogue’s content into dollars, as it historically has always listed fashion credits in the pages of the magazine itself. Still, the affiliate marketing opportunity is small — the market is expected to reach around $7 billion by 2020 — but publishers across the board, from New York Magazine’s The Strategist to The New York Times’ Wirecutter (which the NYT bought for $30 million in 2016) see the value of scaling organic shopping content. For its part, Amazon drives 650 million visitors to its site per month through its partnerships with publishers, and Skimlinks has driven 25 percent of publisher revenue from commerce content.

“We see VogueWorld as a natural evolution of what we do. If we highlight someone’s style, we know that there is natural interest in wanting to recreate that look,” said Yabsley. “We see the brand as a response to the user journey.”