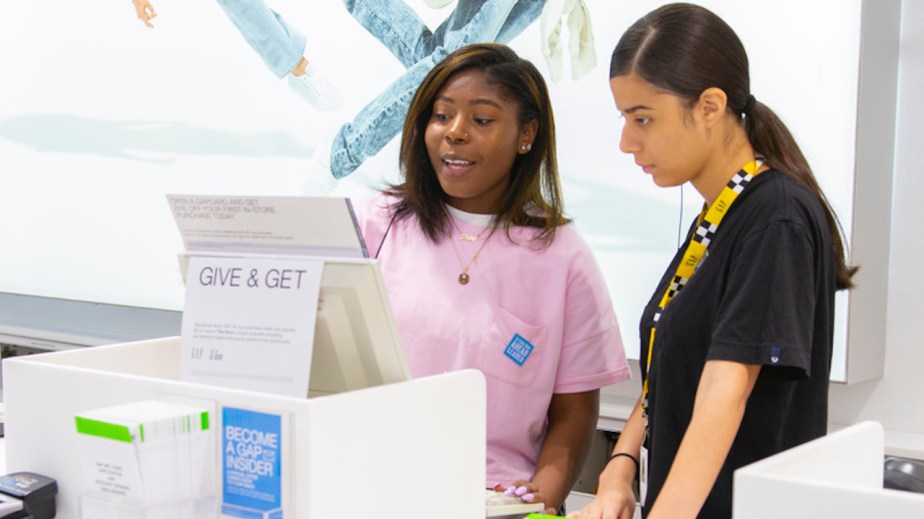 In a sector with notoriously high turnover, Gap has landed on a novel potential solution: disadvantaged youth.

Just ahead of the holiday shopping season, Gap significantly expanded its 10-year-old This Way Ahead program, which taps 16- to 24-year-olds from low-income communities to fill entry-level store associate roles as paid interns. (A Gap representative said the wage is “competitive” and depends on the geographic region of the store location.) Although the initial time and financial investment is more significant than traditional recruiting methods, the program “easily pays for itself, and then some,” said Gap evp and chief people officer Brent Hyder.

The program will expand from 15 cities to more than 60 by the end of 2020, and Gap plans to hire at least 5 percent of all participants in the three-month program by 2025. It is now hiring from the program for Banana Republic, Gap, Old Navy and Athleta stores, in addition to some distribution centers, and will extend to Canada, Japan and 11 cities in the United Kingdom by the end of 2018.

Hyder called the program, which recently began a new partnership with the Boys & Girls Clubs of America to help recruit candidates, a “valuable talent pipeline.”

According to Gap research, the employees gained through This Way Ahead have stayed with the company twice as long and have higher engagement scores, compared to their co-workers. At Old Navy, the cost of training and on-boarding resulted in a 130 percent return on investment.

The company’s evolving store footprint is set to alter the distribution of these interns, as well as traditional applicants. Gap Inc.’s latest earnings report — for the third quarter of 2018, released on Tuesday — showed a 7 percent revenue boost, driven by sales at Old Navy, Athleta and Banana Republic. Comp sales at namesake brand Gap stores fell 7 percent, and CEO Art Peck said there are plans to close hundreds of its 775 stores in the near future.

This Way Ahead started as an effort to help local communities combat the challenge of youth unemployment, Hyder said. It later evolved into a business priority. Although the program complements the seasonal hiring push (Banana Republic’s extends all the way through the first week of January, for example), the program has expanded to year-round hiring in some cities.

Hyder said cultivating retail sales associates from a non-traditional talent pool means that, often, the participants develop more confidence and are more likely to achieve stable employment in the future. It’s also a learning opportunity for store managers, he said.

“When I first started a college recruiting program, our college recruits were failing. We found that our store managers didn’t know how to lead and develop someone who had never worked in this capacity before,” Hyder said. “It’s the same thing with This Way Ahead. We’re helping them be successful on their own, where they wouldn’t likely have been.”

Retail sales associates are among the hardest to hire and the most challenging to retain, and recent reports show that the talent shortage is only increasing: According to staffing agency Manpower Group, the global talent shortage is the highest it’s been in 12 years, with 67 percent of large organizations reporting talent shortages in 2018 and about 25 percent reporting having more difficulty hiring this year compared to a year ago. Manpower Group also reported that sales representatives are the second most-in-demand role.

And due to increased duties for in-store employees that compete with and complement e-tail — such as click-and-collect management and stores functioning as sample shops — stores often need more, or more trained, employees.

According to the Bureau of Labor Statistics, brick-and-mortar retail stores are expected to increase their emphasis on customer service as a way to compete with online sellers, and job opportunities for retail sales workers will continue to increase. Additionally, LinkedIn data from 2018 found that retail salespeople have a 19 percent annual turnover rate.

“When you are hiring entry-level jobs at our scale, it’s not likely those folks will be with you forever,” said Hyder.

The Wall Street Journal reported that this holiday season, retailers planned to hire more seasonal employees and began hiring as soon as July. To make the jobs more lucrative, companies such as Walmart, Target and CVS raised their minimum wage this year, and J.C. Penney added paid time off for part-time, hourly associates.

This Way Ahead started in New York in 2007 as a paid in-store internship including on-the-job coaching. At the end of the internship, many of those who are offered jobs then go on to help recruit and train new participants.

Training and business operations specialist Dashawn Hightower, who works at Old Navy’s Manhattan flagship, entered the program in 2013 when he was 16 on the recommendation of a guidance counselor. Training included instruction on areas including creating a resume, dressing for work and interviewing. At first, he thought of the paid opportunity “as a [pay]check,” rather than an opportunity, he said, but eventually the program “opened his eyes.”

Now, he is an intern manager and works in bridging Old Navy’s physical and digital inventory. He was on the team that rolled out the program allowing customers to buy items online and pick them up in-store.

“The turnover rate for [traditional] associates is higher than for interns,” said Hightower, who, in the most recent season, managed 35 interns. “Interns stay longer than seasonal hires that we keep on for holidays. I think it is because we are nurturing them. We give an insight on business, and they appreciate it and work for it. I want them to see that anything is possible.”

“If we just lower our turnover by a small percentage, in a company this size, it means a lot, financially,” he said.