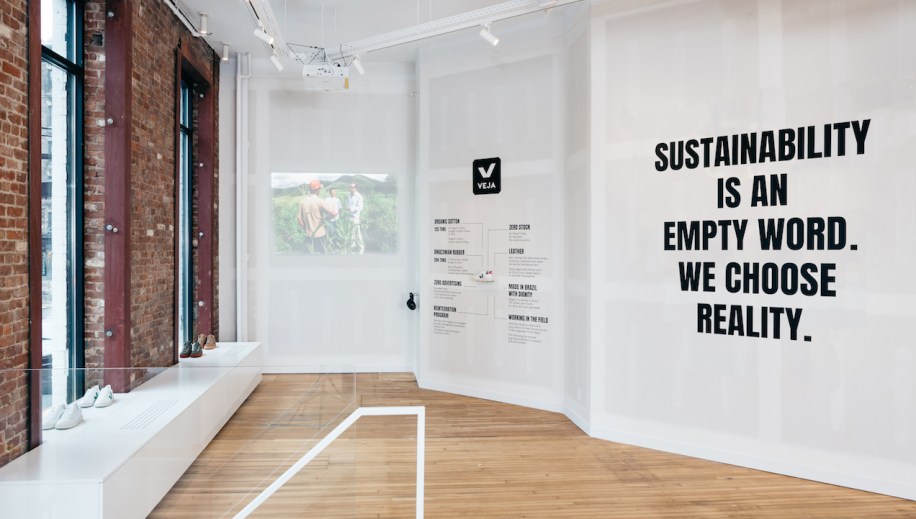 Sustainability efforts expand beyond products and into brick-and-mortar

As sustainability becomes a focal point in the development of products, brands and retailers are starting to adopt certain practices in-store.

Five-year-old Veja opened its first store in the U.S. on March 3, in the Nolita neighborhood of New York City. The brand’s first flagship store debuted in Paris in October. Sébastien Kopp, Veja co-founder, described its in-store brand philosophy, which includes unpainted walls and running on renewable electricity, as a game — to level up and compete with itself to do more and better. Veja joins a new trend in the retail experience, which focuses on customer values.

“In order to be sustainable, the first thing to do is nothing,” said Kopp of building a sustainable store.

Veja’s overall approach is working: The company earned $73 million in 2019 sales, with wholesale making up 60% of sales. In its New York store, it left the walls, floors and windows unchanged, so paint is chipped or discolored, and floors are wonky and uneven. Where Veja did modify was in adding lightboxes, displays for shoes and a light installation by the neon artist Kleber Matheus. The store’s electricity is 100% reliant on renewable energy sources. Within the Veja store, a nearly 10-minute video is on display that tells the company’s founding story and describes sustainability initiatives. The overall store concept is seemingly at odds with the current trend around experiential retail, which includes copious displays, endcaps and other gondolas, uniquely designed walls and lighting, and a more-is-more aesthetic. Kopp said he expects sustainable stores to be the future of retail.

“It’s a new state of mind and a new era. Everybody realizes that luxury and the endless resources we were taking for granted is over,” said Kopp. “The challenge of our generation is to adapt through [practices like] recycling and the circular economy.”

Sustainability has started to gain traction in the retail environment. Sustainable brand Allbirds, which has 18 stores globally, has similar practices in place, such as Energy Star-rated appliances and LED-certified lighting. It also uses natural and recycled materials throughout stores’ designs. The beauty retailer The Detox Market recently launched in its seven stores a collection of sustainable products accompanied by TerraCycle boxes, and incorporated wall designs that show the Earth’s temperature increase over time. Beauty brand Lush has opened standalone “naked” stores dedicated to packaging-free products since 2019.

Kopp also said Veja’s sustainable approach probably saved the company between 20% and 25% in the building out of the NYC store, but that it was difficult to determine or compare to a non-sustainable version because the company always planned to build it that way.

“We believe the return on investment of these efforts will pay off as brands demonstrate to consumers how they are living their values,” she said. “Consumers will continue to shop brands that align with their values, yet consumers are complex, and [their] set of values is diverse.”

Dependent on the containment of COVID-19, Veja will open up an additional store in April in France that will feature a recycling and repair section for Veja shoes.