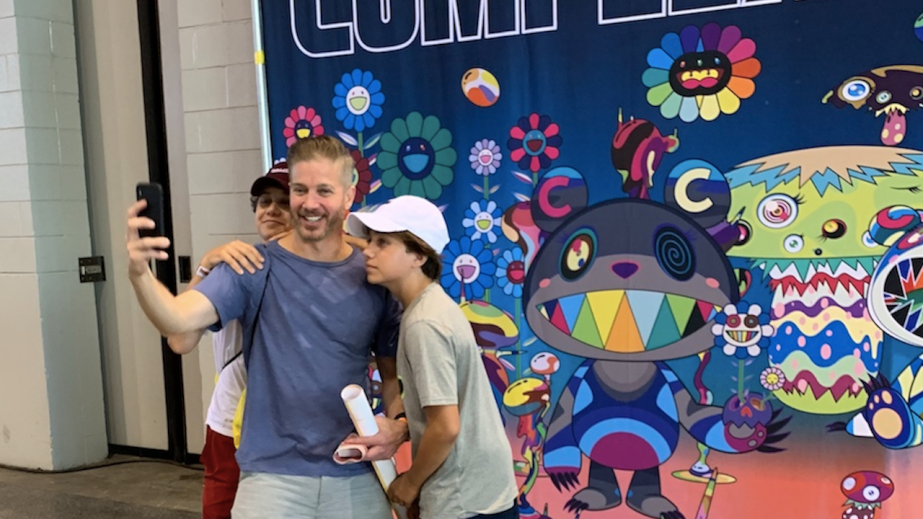 ‘Streetwear culture has become very normal’: What ComplexCon Chicago said about the state of the industry

At 9:45 a.m. on Saturday, day one of ComplexCon’s fourth run at Chicago’s McCormick Place, 14-year-old Chicago resident Brandon Isaacs was waiting in line outside the booth of Chinatown Market where one of more than 100 streetwear and streetwear-adjacent brands that had set up shop for the weekend in the convention center. He was wearing a graphic A Bathing Ape T-shirt and eying colorful basketball featuring different luxury fashion logos on every panel, priced at $80.

Isaacs had paid $300 for an early-access pass, giving him a two-hour jump on general admission ticket-holders, who were allowed to enter at 11 a.m. and paid $80. He said he’d already spent more than $1,000, all at his first stop, ComplexCon’s gift shop. Among the purchases, he recalled snagging were another basketball, a Takashi Murakami charging cable, a mug, a couple of T-shirts, a couple of sweatshirts, a couple of hats and some other accessories. He said he planned to keep everything, though he funds most of his streetwear purchases by selling on sneaker resale platforms. Between shopping, mostly event exclusives, he was excited to see Juice Wrld perform. In the months prior to the event, he’d been to the Virgil Abloh “Figures of Speech” exhibit at the Museum of Contemporary Art Chicago four times.

“It’s really big that Chicago got this,” said his uncle, Justin Meyers, while also browsing Chinatown Market. He eventually walked away with an oversized black pillow stamped with LVs. “My daughters — [ages] 11 and nine — are on their way. Grandma’s coming, mom’s coming — the whole family’s into it, mostly the collectibles. My youngest [daughter] is now obsessed with StockX.”

As streetwear moves further from its subculture roots, its Chicago iteration showed that ComplexCon — which has a tagline of  “the future made physical” and is typically hosted in Long Beach, California — is increasingly appealing to the masses. For the Chicago event, the company worked to connect with a wide swath of the local community and increasingly catered to female shoppers, among other initiatives to tap streetwear’s growing fanbase. The result, many attendees and brand representatives pointed out, was a family-friendly affair.

“It used to be just for the hypebeasts and the streetwear enthusiasts,” said Spifster Sutton, a visual artist and owner of Spifster Nails, a salon based in Chicago’s Pilsen neighborhood. In her booth, she was selling unisex fashion and home decor featuring her art, plus offering nail art services to visitors. Around the corner, women’s brand Rich Girl Candy had two stylists braiding hair. “Now everybody is here; every walk of life is at ComplexCon. It’s dope.”

“The more, the merrier” was a shared sentiment, particularly among the participating brands using the event as both a sales channel and a marketing tool. Matt Waterman, Champion’s vp and general manager, pointed out the wide age range of attendees, saying it worked to the advantage of the 100-year-old brand looking to satisfy loyal shoppers while also earning new ones. Fila’s executive director, John Lin, said the number of attending families –many 10 to 14-year-olds with a parent — was new, compared to ComplexCons on the West Coast, and “fun.”

ComplexCon Chicago, which wrapped on Sunday, was expected to see 10,000 to 15,000 visitors each day, drawing streetwear fans from throughout the Midwest as well as the East Coast, said the event’s executive producer, Isis Arias Clermont. That’s compared to the 60,000 attendees per weekend the event sees in Long Beach. She owed the difference to the venues’ size differences — for example, the Long Beach Convention Center offers a larger marketplace and has a separate arena for music performances. She said, to date, ComplexCon attendees have consistently been 60% male and 40% female.

Complex’s CRO, Edgar Hernandez, said ComplexCon has grown double digits in ticket sales, merchandise sales, attendees, and sponsorships every year since its 2016 launch, though he declined to share specific figures.

Sutton said, at ComplexCon in November, she teamed with Champs Sports on one of the only women-focused activations. For her second go-around, she decided to tackle a solo booth, knowing it would be her largest marketing expense of the year. In November, Kappa spent $100,000 for a large booth, Timex spent $50,000 to $60,000. “It’s expanding, and it’s still the World’s Fair for the youth,” she said.”I had to be here.”

A range of women’s brands joined her: For the first time, Kristen Crawley, owner of 3-year-old KNC Beauty, invested in a booth, complete with a hot-pink couch in the shape of lips and chairs modeled after popcorn — one mom stopped to pose her toddler in the seat for Instagram. Crawley used the opportunity to launch a new lip product, Supa Balm, which was sold alongside her Instagram-popular lip and face masks that had launched earlier in the week at Sephora. Visitors who made a purchase received freebies, including a full-size tube of Revlon Ultra HD Lipcolor and a mini tin of KNC Beauty-branded Garrett’s popcorn, a Chicago favorite.

Crawley said her booth was a big investment for her self-funded company, but Complex “helped out,” as it did with other female-founded brands on board, in the hopes of drawing more female attendees.

“Girls are interested in streetwear as much as guys are, but unfortunately, the market has never been in our favor,” said Crawley. “It’s always been about men, men, men. But considering the large female audience at ComplexCon in years past, Complex is realizing women want stuff, too.”

Attendee Ana Valtierra — a twenty-something Chicago resident wearing a yellow tee splashed with “RSVP,” the local streetwear retailer launched by Virgil Abloh and Don Crawley, now married to Kristen — bought a $250 Jean Paul Gaultier piece from Bryant, who she follows on Instagram, before scooping up four lip balms at the KNC booth for $100. She said the event’s mix of retailers fit her style: “I shop the men’s section, I shop the women’s section, I wear sneakers — I do a little bit of everything.”

As a means of introducing itself to the city, ComplexCon hosted in the days prior to the weekend event its first Community Week, teaming with Chicago organizations on daily events largely supporting underserved communities. Among included events was a soup kitchen takeover in partnership with charity TaoCares, a leadership panel, and the Complex Community Heroes Dinner, celebrating locals. On Friday, it revealed a dedicated mural to the city featuring a sneaker.

Growing its own community is a big objective for ComplexCon. When asked where she sees the event in a decade, Arias Clermont simply said, “Global.” She later elaborated saying reaching growth goals will mean continuing to stay on the pulse of youth culture. “In 10 years, the audience we’ll be talking to are kids that are 5 [years old] now. We need to be paying attention to what they’re going to think is cool.”

Attending ComplexCon on Saturday was Andre Smith, a professor of marketing at the University of Illinois at Chicago. He said the event’s crowd made sense for Chicago as, “a lot of people who butter their bread in Chicago butter it with marketing jobs.” Their kids wanted to go, and the parents saw it as a chance for research.

But like the popular opinion that streetwear is getting diluted and losing its identity, Smith stressed his concern that ComplexCon may be going too broad. “It’s a lot to process here,” he said. ”I’ve just distilled it as a mashup — the best of everything. It’s cool, it’s just not easy to navigate.”

But the event’s state seems on par with the vision of contemporary artist Takashi Murakami, ComplexCon’s art director. “Streetwear culture has surged, and it’s now mainstream in Paris high fashion and thus become very normal,” he said. “The crowd [at the first ComplexCon] in 2016 has had the amazing power to become mainstream.”

He compared the event, with its wider focus, to his work as a Japanese artist, seeing no barriers between high art and low art. “It feels like American culture and the art scene are [aligning]. I’m constantly thinking about ways to stay relevant, and I’m so glad people are excited.”

Chicagoans and other visitors of ComplexCon, who stood in line to buy art and rushed to sneaker drops, indeed seemed excited. Ariel Sandler, senior manager of retail marketing at New Era, said the brand’s new collaboration with fashion brand Fear of God — a ball cap — sold out within an hour. “And there was still a line around the corner,” he said.

“Chicago creatives are really forgotten about a lot,” said attendee Kendel Reese, a music producer whose sister owns Rich Girl Candy. “So to be here and be recognized with the industry’s premier creatives is just a crazy thing.”

Brandon Isaacs agreed. “This is the biggest thing we’ve had here.”