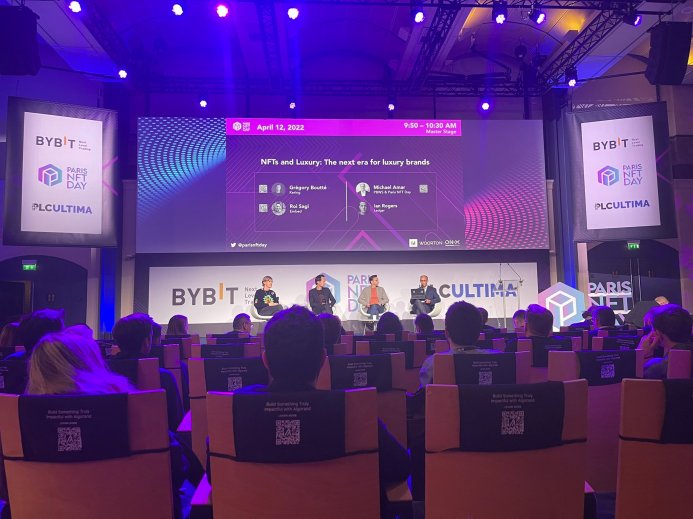 Taking place on April 12, the first day of Binance-sponsored Blockchain Week Paris, NFT Day is the first European event to gather the whole NFT ecosystem. The event included representation from fashion brands, as well as tech software developers. With companies from luxury fashion labels like Gucci to fast-fashion brands like Boohoo launching NFT collections in the last year, brands have increasingly taken interest in the industry and where it’s headed. Different NFT projects have had varying success rates as brands learn the importance of critical features — namely, community building, long-term planning and reward holding — while finding their footing in the space.

With representatives from Kering, L’Oréal and Sotheby’s present at NFT Day, many of the talks took a look behind the curtain of fashion’s and beauty’s biggest NFT projects to date. For example, the first big fashion-focused panel centered on the next era of luxury brands and NFTs, based on explorations thus far by Gucci, Balenciaga and Balmain.

Discussion topics ranged from what brands should focus on when first getting into the NFT space to extending their existing projects. Here are some key things the panelists addressed during the day.

Grégory Boutté, chief client and digital officer at Kering, said that with every NFT project Kering is doing, the team is trying to create a sense of community. It’s also trying to augment its NFTs with the story it wants to tell around its fashion houses and the emotions it wants to create around its products. Creating a digital rendering or garment may not take long, but building a community can only happen by spending time and focusing on unique value propositions.

“The first thing we’ve seen work, in terms of community, is creativity, especially in the NFT and digital artwork space. One of the value propositions of luxury houses is creativity – creating amazing, innovative products. From that perspective, there’s a strong alignment here between the luxury industry and the web3 or NFT space,” said Boutté.

Community members are more likely to join and buy an NFT if it isn’t just a piece of digital artwork or garment. By giving functions or adding additional experiences to NFT purchases, brands can stand out and create long-term incentives for buyers to stay in their community. Buyers are looking for community-focused projects that are carefully thought out and curated, offering value and essentially turning them into club members, where only those with the purchased tokens can access brand-exclusive events and goods. “We’ve seen that providing access and utility, and not just digital artwork, works really well [to pique interest],” said Boutté.

For example, the Adam Bomb Squad project is giving out royalties to community members from goods using its artwork, while a large-scale project by D&G has given buyers a unique couturier experience.

For Kering, keeping the community updated through its Discord and detailing regular updates on its NFT roadmap allows for a connection with the people in it. Features like whitelists that function as a VIP access list in the NFT world are a great example, giving early adopters guaranteed access to mint at specific dates and windows of time. These have been successful for the company’s brands like Gucci, with whitelists filling up within hours.

Another function still relatively limited in the NFT space but valuable to communities is making NFTs interoperable across platforms. This would mean that users could both use them on The Sandbox and play with them in games like Roblox, for example. With interoperability, there is a higher chance that buyers will purchase more NFTs to use them and display, strengthening the community across multiple platforms.

Community also adds an element of exclusivity. There are now physical art galleries in Berlin that deny entry without a members-only NFT. “NFTs have literally become the passes allowing us to move between spaces,” said Ian Rogers, chief experience officer at crypto hardware company Ledger and former chief digital officer at LVMH.

Projects need to have a long-term vision
Kering, owner of Gucci and Balenciaga, has in-house teams focused on digital innovation allowing it to explore freely within the space. While its risk-taking is not standard among luxury’s “wait and see” tribe — luxury brands are typically slow adopters, when it comes to innovations like e-commerce — its initial projects provide a model for brands looking to newly launch in the space or extend their current projects. For example, Gucci’s multiple NFT drops have been connected: Members that have purchased its NFTs in the past, like the Super Gucci collaboration with collectible company Superplastic released in January, are whitelisted. This is still new within the fashion space – most NFT projects are not large enough yet to link separate projects.

This idea of having a long-term NFT roadmap allows Kering space to develop its next idea while keeping its community involved through its Discord.

Reward holding, rather than flipping, NFTs
“What Bobby Hundreds is doing with the Adam Bomb Squad is the best example of [rewarding holding, rather than flipping, NFTs]. He’s really trying to build a brand. He’s not very friendly to the flippers; he’s actually been disappointed in a lot of people who wanted to buy low and sell high, and instead, he’s trying to create value for the members [who don’t sell],” Rogers said.

As more NFT projects are launched, the flipping process has become a way to separate the community members who are loyal from those who aren’t. Those who are in it for the long haul practice holding, seeing their NFTs as more than a cash grab, as new utilities emerge and creators reward their long-term holders. Rogers is one of the holders of an Adam Bomb Squad NFT. “I’m getting offers on my Adam Bomb Squad right now. I get them all day every day, but I never accept them. I have no intention to because, for me, that’s a long-term community,” he said.

Creating this value usually comes from adding features the community appreciates, from offering physical experiences to adding NFT utilities. The Hundreds brand was one of the first to release an NFT in August 2021. Although it is not a typical luxury or fashion company, as a streetwear brand with a print magazine, its strength relies on an existing community that believes in the brand, similarly to Nike enthusiasts and Supreme fans. Its early members were able to cash in on a low NFT price, and early adopters saw themselves as the true community, with companies like Shopify later buying in when interest in the project peaked. Shopify used the NFT in a profile picture update on Twitter and has allowed NFTs to be sold and bought on its platform.