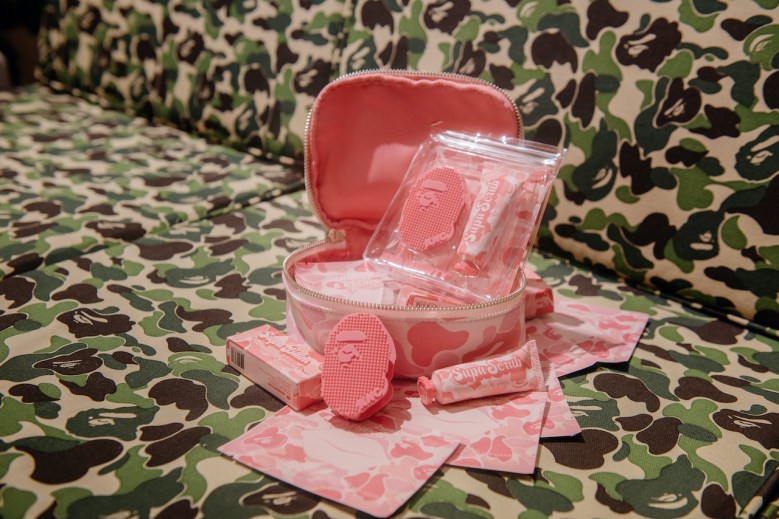 Beauty brand KNC, founded by Kristen Noel Crawley, is the latest beauty brand to cross over into streetwear by collaborating with the iconic Japanese streetwear brand A Bathing Ape (also known as Bape).

The seven-piece collection, launched on July 10, features Bape-inspired lip balm and lip masks, along with KNC x Bape branded hoodies and crop tops. The line will be available at all four Bape U.S. stores and both Bape and KNC’s online stores. Two Bape stores outside the U.S., in London and Bangkok, will only sell the apparel and not the beauty products. The pieces in the collab range in price from $25-$250.

According to Crawley, KNC’s first-ever launch in 2016 included camouflage prints specifically inspired by Bape, as she’s been a fan of the brand, and streetwear in general, for years. Her husband happens to be streetwear designer and former Kanye West manager Don C. She said that getting to officially use Bape designs and prints “and apply it to the ethos of KNC Beauty has been a wonderfully fulfilling experience.”

Both KNC and Bape are promoting the collaboration on their respective Instagrams, where they have nearly 5 million combined followers (about 4.7 million come from Bape).

Both beauty and streetwear are, typically, very gendered categories. Despite a growing interest in skin-care products among men, beauty has traditionally been marketed very heavily to women. Conversely, streetwear and sneakers, in particular, have always been sold to men, to the point where there’s a common joke about “shrink it and pink it” being sneaker designers’ go-to strategy when making shoes for women.

But in recent months, that has slowly been changing. StockX put out a report in February showing a 130% increase in women users of the site from Jan. 2020 to Jan. 2021. Kyx World, a subscription sneaker service that launched in April, found that more than a quarter of its users are women, far above the 10-15% that CEO Brian Mupo expected before launch.

“A lot of sneakers are prohibitively priced for women,” Mupo said. “A shoe like a Nike Dunk can be $400 for a size 12, but if you look at a [men’s] size 5, it’s like $700. That’s been historically unfair to women. But despite that, there’s still a lot of growth in women’s interest in streetwear and sneakers.”

While women’s streetwear is growing, men’s beauty is growing, as well. Buoyed by new launches like Shiseido Men in March and Boy de Chanel in 2018, the market for men’s beauty is expected to be worth nearly $19 billion by 2027, according to Grand View Research. According to NPD, sales of men’s skin care in April 2021 were higher than women’s skin-care sales in April 2020.

Beauty and streetwear crossovers are certainly becoming more commonplace. Kith partnered with Estée Lauder in 2019 for a collection. In 2020, Travis Scott worked with Byredo and Supreme with Pat McGrath. This past March, Off-White teamed with Amorepacific for an Asian market exclusive.

With both categories on the rise, it’s fitting that brands from both worlds are looking to collaborate. In an emailed statement, Bape’s brand partnerships manager Kevin Le said that, with the KNC collab, the brand “wanted to show our supporters beauty and fashion can go hand-in-hand.”