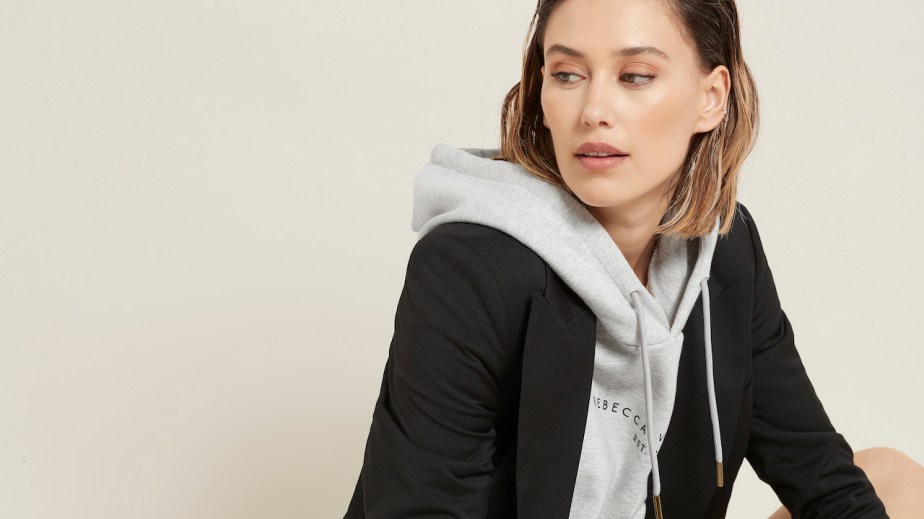 As consumers get used to the comforts of staying at home, including their WFH wardrobes, brands are adjusting their focus to make sweatpants and hoodies a significant portion of their business.

On Tuesday, Sydney-based luxury fashion brand Rebecca Vallance launched a five-piece line called Sportif, marking the company’s first solo foray into the athleisure category. Designer Rebecca Vallance has exclusively focused on ready-to-wear since launching her nine-year-old namesake brand, which for years was a regular at New York Fashion Week. Now, she said, she wants the company’s athleisure business to equal that of its ready-to-wear category. A third category, set to be released later this year, is also planned to be equal in size — Vallance declined to share details ahead of its announcement.

“We realized that we’re dressing our customer for work, for events, for parties,” said Vallance. “But my lifestyle has changed since I had my two boys, and I figured other women’s lives must be similar. You can’t wear a pretty party dress to a soccer park. We want to outfit our customer for as many aspects [of her life] as possible.”

Of course, dressing for anywhere but home hasn’t been a concern for most women since early this year. Vallance said the Sportif line has been in the works for 18 months and was set to launch in February, but that proved impossible due to pandemic-related obstacles in her supply chain.

“We always thought it would be a solid category, said Vallance. “But with the world the way it is, it’s going to be a big part of our business.”

Vallance got a hint of her customers’ appetite for the category earlier this month: On August 7, Rebecca Vallance and Australian activewear brand P.E. Nation released a 10-piece athleisure collaboration, priced from $80-$580, on pe-nation.com. It sold out in 90 minutes, according to Vallance, who didn’t share units produced. “Ideally, these launches would have been a good six months apart,” she said, of the collaboration and Sportif.

But the experience informed her Sportif launch strategy. Vallance decided to exclusively sell it through the brand’s website for the first 24 hours — despite that it is opening a new store in Australia on the same day.

Ahead of the launch, the brand’s website featured a Sportif signup page “to be the first to secure a piece from this limited collection,” which collected 5,800 email addresses in the first 24 hours, said Vallance. The brand had more customers sign up than pieces available to sell. Vallance declined to share the number of units made. The page was promoted through Instagram and email, and the company opted to stick to digital promotions throughout the limited collection’s launch.

A second release, with 40 styles, will launch later this year — they willl be available in the four Rebecca Vallance stores, all in Australia, as well as on the brand’s e-commerce site. The brand plans to incorporate unpaid influencers into its marketing for the line at that time.

moved up In addition to its site and stores, Rebecca Vallance sells through retailers including Net-a-Porter, Saks and MyTheresa.com. Its top markets are traditionally the U.S., Australia, the U.K. and the Middle East, in that order. Currently, sales in the U.S. and Australia are head-to-head, and sales via RebeccaVallance.com are up well over 100% year-over-year. Vallance declined to share the DTC-wholesale sales split.

Rather than focus too much on marketing the first limited-edition collection, Vallance said she and her team have been working on Sportif lookbook imagery and videos for market week, which coincides with New York Fashion Week in mid-September. For the first time, rather than travel to New York for in-person appointments with retail partners, the team will work from Australia via video platforms. Their goal is to ensure that products are shown from all angles, details are visible and the styling is timely, so retailers will feel comfortable buying into the line. All imagery for Sportif shows the pieces mixed with the brand’s ready-to-wear.

“That’s indicative of the client at the moment; we’re all evolving,” said Vallance. “If you’re on a Zoom call with the director or president of your company, you want to make sure that you dress for the occasion, but you want to be comfortable at the same time.”

Even ahead of the pandemic, the company was ramping up its focus on separates, to be less centered on dresses, and making more “laid-back” dress styles, said Vallance. As for gowns, of which there are currently nine on the site, Vallance said she’s “hitting pause” on the category through at least the remainder of the year. “We sold a few gowns in our store last week — I don’t know where those people think they’re going,” she said.

Sportif’s pieces are priced $175-$190, which is above average for styles in the space. According to Edited’s latest research report, showing how apparel prices have shifted during the pandemic,  the price of leggings among pure-play active retailers fell 1% to $81.07 from February 17 to August 17. And sweatpants are down 5% to $50.89, owed to saturation in the market.

“The loungewear trend is now offered by mass market retailers to luxury designers, and that makes it difficult for new players to cut through the noise,” said Kayla Marci, retail market analyst at Edited. “Plus sweatpants are more for wearing after a workout, rather than during, so they require fewer technical features that can warrant a higher price tag.”

But luxury brands continue to launch more casual options, in step with changing consumer behavior. A May 2020 report by market research company TechNavio said the athleisure category has the potential to grow $81 billion from 2020 to 2024. Anna Sui launched activewear in China in 2019, and she’s hoping to bring the collection to the states in 2021, she said on the Glossy Podcast. Burberry focused its latest TB Monogram collection, for summer, on casual styles, with the Kardashian-Jenner family driving buzz around sold-out pieces like $480 leggings. Fendi’s activewear category page features a pair of pants for $1,100.

Vallance defended the price of Sportif: “With everything we do, it has to be authentic and genuine; I would never introduce a category that wasn’t 110% on brand,” she said. “Our ready-to-wear is elevated, and it’s important that Sportif is, as well, through and through.”